Hurricane Irene to Hoboken: Hello it's Me

Hoboken is seeing hard rain picking up and the full brunt of the hurricane is expected in the early morning hours around 5:00 am.  The west side of town already saturated from earlier rains is faring poorly and it's still early in the storm.  The Shoprite area is flooding and the lower part of the 4th ward is not doing much better.

The Wallace School is being evacuated as a precaution.  The State has opened the
Izod Center in the Meadowlands as another hurricane shelter.  Residents and city staff are on a bus moving people before the conditions worsen and travel becomes impossible. 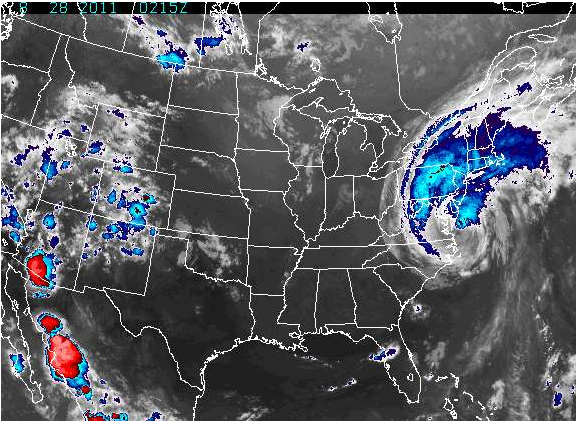 Talking Ed Note: Tens of thousands are losing power with the severe conditions.  Atlantic County has seen almost 100,000 lose power while thousands of others in Central New Jersey are facing a similar predicament.  Earlier a Hudson Reporter story quoted PSE&G as saying the amount of power outages could take weeks to fix.
Posted by SmartyJones at Saturday, August 27, 2011
Hurricane Irene to Hoboken: Hello it's Me
2011-08-27T23:41:00-04:00
SmartyJones
Comments

Mayor Dawn Zimmer and a team of city officials have staked out their command center at City Hall.  The mayor who lives in the 4th ward doesn't anticipate making it back to that part of town with the heavy rains having begun and the hurricane bearing down behind it.

Stevens Institute delivered a worst case scenario with overflowing sewers in the south part of town coinciding with a storm surge from the Hudson in the east.

Full story is featured at the home page of NJ.com:
http://www.nj.com/news/index.ssf/2011/08/hoboken_mayor_on_hurricane_ire.html 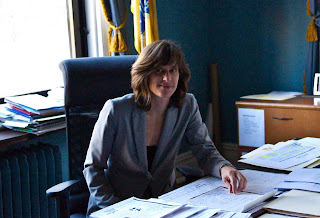 Sign of the Times: City braces for the hit 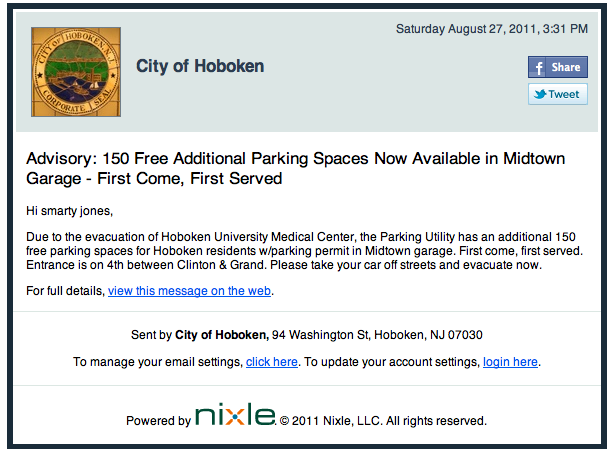 Mayor: 'City could be under five feet of water'

Mayor Zimmer making another appearance at Hoboken City Hall urged Hoboken residents to get out noting the power of the hurricane could put the city under five feet of water in a worst case scenario.

Combining the highest tide of the year, the concerns are the city could be hit with water from both the south and also from the east with an overflowing Hudson River.

The mayor said cars needed to be taken off the streets or the storm could destroy them with the amount of flooding likely to occur.

Fire Chief Blohm said residents needed to avoid flood water as the risk of electrocution from downed power lines was a severe threat. Residents should avoid contact with the flood water as it conducts electricity.

The mayor noted businesses should close and the city was deploying row boats.

Yesterday the mayor urged residents to use time wisely and pack up and leave.  For those who chose to stay she noted they should be prepared to see electricity out, have food for at least three days and fill the tub and sinks with water for flushing purposes.

Talking Ed Note: For those who are looking to stay please review all the available City information (also listed here at MSV).
Posted by SmartyJones at Saturday, August 27, 2011
Mayor: 'City could be under five feet of water'
2011-08-27T12:49:00-04:00
SmartyJones
Comments

For residents who are unable to leave Hoboken, a shelter is open at the Wallace School at 1100 Willow Avenue. Residents should bring blankets, pillows and sleeping bags. Designated bus pickup locations will are at 3rd and Jackson, 1st and Bloomfield, 5th and Willow, and 12th and Hudson. Buses will pick up residents at 10am, 12pm, 2pm, 4pm, and 6pm and transport them to the Wallace School.

All licensed alcohol establishments in Hoboken must stop serving alcohol by 8pm. Driving of personal vehicles, including taxis will also be prohibited after 8pm. All PATH and NJ Transit rail service will be terminated at noon today. 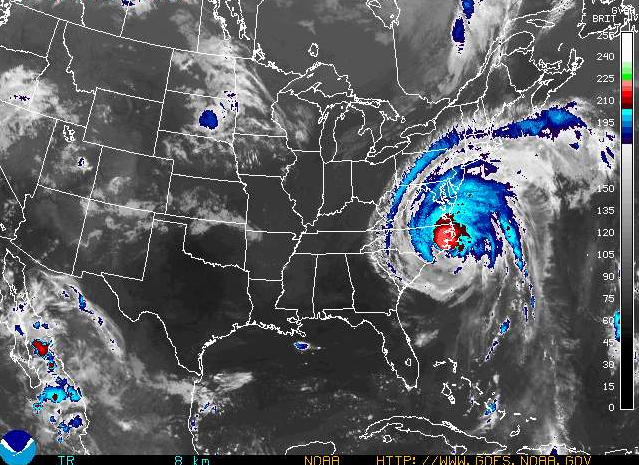 
If you can leave Hoboken regardless if you are ground floor or not please do.
I ask that you forward this email, post it on facebook, help spread the word.
If you know someone in a ground floor apt., please reach out to them.