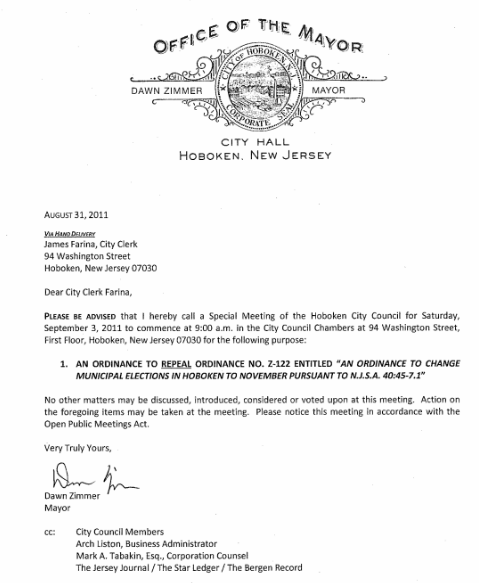 In a continuing chess game to alter the municipal election landscape, Mayor Dawn Zimmer is calling for a special City Council meeting this Saturday to repeal the ordinance moving municipal elections from November back to May.

A quorum is needed for the meeting to begin, scheduled for Saturday at 9:00 am.  A majority of five votes is required to reverse the ordinance originally shifting municipal elections from May to November.

Frank "Pupie" Raia and Councilwoman Beth Mason have put resources behind reversing the ordinance via referendum.  The effort produced sufficient signatures exceeding the required 2200 submitted to the City Clerk's Office.   Now the effort may not see a vote in a November election with little compelling reasons for Hoboken voters to show up.

The only item of local interest this November is a Freeholder race between incumbent Anthony "Stick" Romano and Kurt "Giant" Gardiner.  Assemblyman Ruben Ramos is on the ballot for re-election but has no opposition.

The council minority led by Mike Russo and Beth Mason has been feverishly fighting to keep the municipal elections from being moved to November where 45% more voters are typically expected to show up at the polls based on an earlier Hudson Reporter story.

Hurricane with a Purpose

After missing two consecutive City Council meetings, people were asking where Councilwoman Beth Mason was as there was nothing heard from her or her army of consultants in recent weeks.

Then not hours after the hurricane jetted out of town early, she held a meeting at 12th and Washington, an office she's retained since her spring Council campaign and for the Assembly run for Ruben Ramos. Most recently the office was used for the referendum to move municipal elections back from November to May.

It's not clear what topics were discussed but apparently one agenda item was "Hurricane with a Purpose," a plan to get some good pictures taken handing out water and crackers to HHA residents.

Councilwoman Mason is familiar with the HHA, well at least in an electoral sense as she's run an absentee ballot campaign there.  In 2009, just like Tim Occhipinti, she had page after page after page of paid "campaign workers" who all voted absentee.


The rest of this feature is MSV Premium Content.  To have this story emailed to you, please choose among the subscription options:
Posted by SmartyJones at Wednesday, August 31, 2011
Hurricane with a Purpose
2011-08-31T13:00:00-04:00
SmartyJones
Comments

Hurricanes are powerful, dangerous and still quite unpredictable despite our modern technology. Government, which often over-reaches in many matters, did not overreact in the Hurricane Irene emergency. A lot of borderline decisions had to be made.

They made the right calls. Locally in Hoboken, starting with the Mayor’s office right down to the general public, the teamwork was outstanding. Police, Fire, OEM, CERT, EMS, all city departments, Hoboken Board of Education, NJ national guard, N.J. Transit, PSE&G,  volunteers from the public and Stevens Tech students formed a team that helped save life and limited property damage as much as possible. Residents and local business’ also supported by donating food to citizens and workers. The formal and social news media provided pertinent information and warnings.

I was honored to serve as a volunteer member of C.E.R.T. [Community Emergency Response Team] and have the opportunity to interact with the above personnel and work side by side with city directors in hands-on operations. Hoboken, as well as other communities, prevailed as much as they could because they had many ‘boots on the ground’.

Video Tribute to Hurricane Irene and attack of the Hipster Doofi

Late morning Sunday, the eye of the storm passed and the tail blew to the side bypassing Hoboken completely, sparing the town more rain.  The sun came out shortly after before noon and emerged in our midst a new species of hipster doofus, clad in almost knee high rubber boots.

This new group surfaced to take the streets in full hipster regalia, even though if they sported their typical foot ware: flip flops, they wouldn't get a toe wet.

So prepare yourselves, they could be back.  Hoboken is under attack of the hipster doofi.


Here's a video put to song by Hudson County TV of North Bergen and Hoboken: