Bet: We did it! Pinkers annihilation confirmed

We did it!  Together you and I along with my loyal cohorts Inane Blowhardy and Councilman Timmy Ackipintay have totally annihilated the scourge of Hobroken, Nania Pinkers.

In tandem with my best friend in Washington, His Royal Aloofness El Presidente Bamster, we not only burned at the stake her stupid website, Grapeleaves Forever, we had her home razed to the mofoing ground.  Fortunately, the cost to Hobroken for this operation is zero as Councilman Ackipintay called NORAD and told them his tale of woe.  He had not been able to sleep after having nightmares of Pinkers little kitty rubbing up against his leg - a terroristic threat to his well being.  He promptly contacted the authorities to rid us of this feline menace once and for all.

The officers hearing his tale of woe were so impressed with his prissy wussiness, they summoned their best and brightest for this important mission in my honor.  A team of demolition experts with a small cruise missile able to deliver a concentrated metric ton nuclear payload soon arrived.

And what a fine bombing they did!  It was the best gift I've ever received from a fellow Councilmember especially considering I've bought and sold Ackipintay several hundred times over in two recent elections.  His appreciation is so replete in my splendor, he only dances in speedo suits to the Michael Jackson Thriller album for me now.  Eat your heart out Subsidied Towers!

Last night the Hobroken City Council held a very special meeting honoring me for all the wondrous things I've done for the community in the last 48-72 hours.  While cutting taxes 25%, I hired every person no longer gainfully employed in the 3rd ward affiliated with the Mikie Squared Association.  I'm so impressed with myself, I've already ordered my resume updated with this information and mailed out to your homes.

As many of you well know, I've extended my endless mercy towards the ungrateful, unrepentant Nania Pinkers who insists on rejecting not only my kindness but also those who follow my marching orders such as Councilman Ackipintay and his new developer friends who run planes, trains, automobiles and local buses.

Did she accept our kindness and control over Hobroken?  No, instead she insisted on writing fanciful tales about the occupant currently holding City Hall hostage and constantly beseeches foreign law enforcement agencies to come visit us, sometimes inviting them into our very neighborhoods!

Well me and my friends finally had enough and Presidente Bamster assured me the nuclear fallout across from the P&A supermarket was a small price to pay to be rid of this Hobroken scourge.  Could I do anything other but allow my minions unpaid for friendship to honor me and rid us of the Pinkers menance?

So while on vacation in the south of Francia, I paused from enjoying this lovely bottle of Margeaux you will never be able to afford and made a phone call approving this limited tactical nuclear strike.  The accolades have been pouring in ever since!  I'm so grateful for the millions of emails and telegrams to me at the Mazonic Temple on Redrum Street.

To honor both myself and this landmark action in my career, I'll be offering free gift certificates to Ibiza Falafel.  To redeem your measly little petty coupons, please see any superintendent at an Uhpliant Building near you.  Just mention my name and tell them Bet sent you.  Double coupons if you can say it in Spanish followed with "glory be upon her."

I'm truly astounded at the outpouring of love and devotion all of you have shown me and promise to broadcast my latest unpublished speeches from a secluded location until we are able to overthrow the Zimmertineez like this now deceased Pinkers woman who infested our land.  Their scourge must be removed forthwith!

May my mercy be upon you all,

According to a story by Ray Smith in the Hudson Reporter, the case against Hoboken Parking Director Ian Sacs and a bus driver of a Hop Bus has been dismissed.

The case became a political football when a bus driver was alleged to have abandoned his Hop Bus, later recovered by the Sacs leading to a scuffle inside City Hall with the driver.  Sgt. Melissa Gigante reported she saw two men "interlocking" their arms.

The Hudson Reporter picks up the story:

Sacs had come across a city bus that was parked but running with the keys still in it, according to a police report. He then drove the empty bus to the municipal garage. At City Hall, an altercation ensued between Sacs and the driver of the bus in which Sacs alleged that he was assaulted by the man, according to a report.


The driver's personal keys were also on the key ring, which led to the municipal employee to file charges of harassment and theft.

Hoboken411 did a hatchet job on Ian Sacs who wrote a letter to local media outlets protesting the lies against him.  The notorious sewer dwelling website is known for its hit jobs and iron handed censorship against anyone who is not a supporter of Councilwoman Beth Mason.  Its political coverage has been practically dormant since the FBI visited Hoboken late May and its well known ghostwriting minion who is not paid for Beth Mason's friendship, MIA.

Talking Ed Note: Ian Sacs has made huge contributions to Hoboken since he took over from his predecessor, an alleged criminal who took off with almost a million dollars in quarters working with a mob connected arcade firm in south Jersey.  He's succeeded even with the abuse he's faced by Councilman Michael Russo on many occasions at City Council meetings.

Councilman Russo had previously attempted to convince the public the missing million in quarters was a "mistake in" his "calculations."  It was then shown otherwise, a true million dollar heist.

Currently Director Sacs is leading an installation of a new parking meter system anticipated to add millions in new revenue to the City.

The City of Hoboken has finalized the conceptual design for the September 11th Memorial. Engineering drawings and estimates are being completed, and the City will go out to bid for construction once all necessary funds have been secured.

“Hoboken was greatly impacted by the attacks of September 11th, and it is important that we have a permanent memorial for our community and visitors to remember, reflect, and come together,” said Mayor Dawn Zimmer. “I thank the September 11th Memorial Committee, the City Council, and the community for their donations and ongoing support for this memorial. I also thank the NFL for their recent contribution and welcome additional donations from the community as we work to secure final funding for this project.”

Donations can be made to the 9/11 Memorial Fund trust account and mailed to the City of Hoboken, c/o Business Administrator, 94 Washington Street, Hoboken, NJ 07030.

A sign is being installed near the location of the memorial that includes a rendering of the project and the following description: 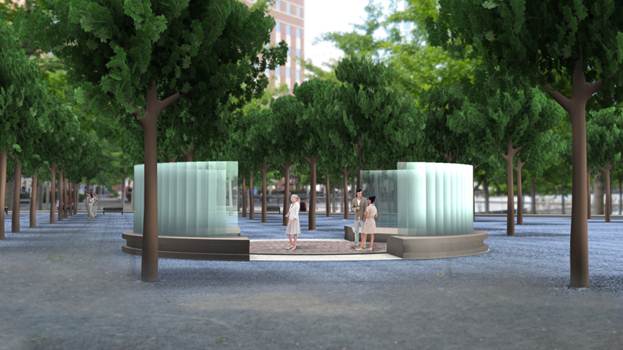 The future September 11th Memorial will be placed here within this memorial grove of trees and oriented toward the World Trade Center site. The main feature of the memorial will be glass panels--one representing each of the victims from Hoboken who perished in the September 11th attack on the World Trade Center.  The edge of each glass panel will bear the name of one of the victims.  There are two symmetrical semicircular platforms that will each hold half of the glass panels. The two platforms with the panels are considered representative of the twin towers. Lighting will be utilized to highlight the glass panels. Visitors will have a place to sit and place mementos and flowers. Quotes from those who were there that fateful day will be etched around the outside edge of the concrete platform on which the glass panels rest.  The inside edge of the platform will be inscribed with words that describe the relationship of the victims, such as Mother * Father * Sister * Brother * Child * Partner * Wife * Husband.  We will never forget.

On Sunday, September 11, 2011 at 6:00 p.m., the Hoboken community will come together to share in its Annual September 11th Interfaith Memorial Service for the victims, their families, the City of Hoboken, and the entire nation. This year’s theme will be “A Time To Come Together, A Time To Remember.” City officials, the Hoboken Clergy Coalition, and various community organizations will share in this remembrance on the southeast corner of Hoboken’s Pier A Park – the site of a makeshift memorial on September 11, 2001.

Following the ceremony, the NFL will do a tribute to 9/11 on Pier A featuring a bugler playing Taps that will play live on NBC before the game between the New York Jets and Dallas Cowboys. Afterwards, the entire game will be broadcast on a screen at Pier A Park. Residents are welcome to view the game at the park.

In addition to the memorial service, residents are invited to attend various other community events. The Hoboken High School will hold a ceremony on Friday, September 10th at 9:00 a.m. for the rededication of “The Hoboken Children’s Memorial Flag” by Raymond Smith. All Saints Episcopal Parish will hold their annual commemoration with a morning liturgy at 8:00am followed by the ringing of a bell from 8:46am to 9:03am. Additional services will take place at 9:20am and 11:15am. All Saints is located at 707 Washington Street. The United Synagogue of Hoboken is hosting their annual day of service, Mitzvah Day, an opportunity for residents to give back to their community. To sign up, residents are urged to visit: http://hobokensynagogue.org/MitzvahDayForm.php. The 9/11 Hoboken Remembers Organizing Committee is hosting a moderated panel discussion on Wednesday, September 14th at 7:00 p.m. at All Saints Church, 707 Washington Street.

Residents are advised that Hudson County will participate in the national 9/11 “Moment of Remembrance” on Sunday at 1:00 p.m. This will involve activating the County emergency siren system for approximately one minute.