According to a well placed source with knowledge of the pending purchase of the hospital, the question of whether Hold Co will carry an in-network insurance option for many residents who are enrolled in Horizon Blue Cross has been answered - and the answer is YES!

As promised, the HMHA has been working dilgiently to ensure that the sale of HUMC proceeds in a manner that benefits the City of Hoboken and all its residents and worked hard toward an in-network option for Horizon Blue Cross customers.

The Hoboken Municipal Hospital Authority previously demanded that the sale contract to the proposed buyer Hold Co include a provision that required the buyer to use every effort to enter into agreements to maintain managed health care contracts. Now that demand has been met.

Da Horsey has just learned that the proposed buyers, HoldCo of Bayonne have completed today an agreement to accept Horizon/Blue Cross Blue Shield managed care .  As a result, a pending sale of the hospital to Hold Co will mean  IN NETWORK service with this provider for all those in Hoboken and that insurance carrier will see the same level of quality service at the in-network price.

As a result, the City of Hoboken's employees, employees of the Hoboken Housing Authority and Board of Education will continue to have their current insurance honored by HUMC as well as all of the other Hoboken residents who hold this managed health care provider.


Talking Ed Note:  This agreement was apparently signed behind closed doors.  Obviously it was done without the Beth Mason "standard of transparency."  So it should be stopped.

Okay, stop laughing.  Now can we finish saving this hospital?  There's a lot of people who have put their names and reputation on the line to help Hoboken.

From the desk of Council President Ravi Bhalla: 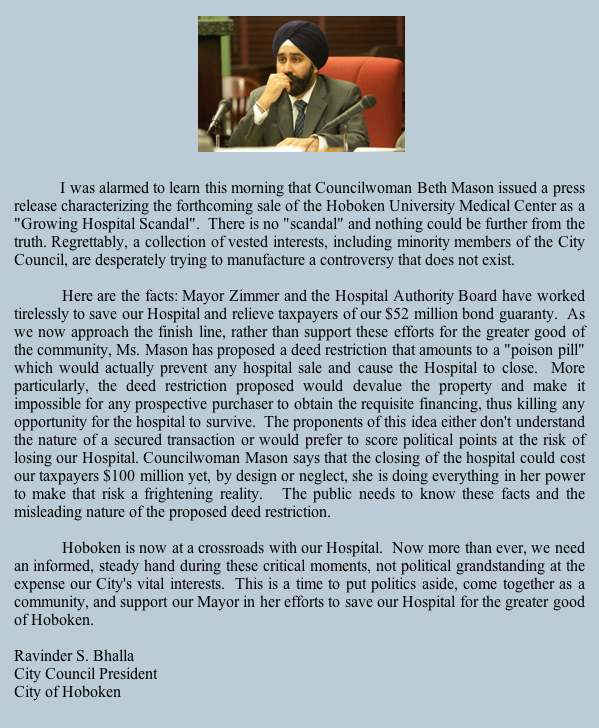 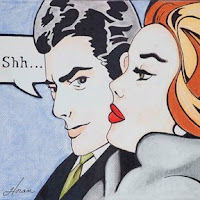 A hearing on the matter of the sale of Hoboken's in limbo hospital was held on Tuesday but no reporter attended and that includes the New Jersey Star Ledger which has been critical about the circumstances of the sale.

At the hearing, the judge made several blistering rulings on the controversial lawyer, Donald Scarinci who had his side of a story solely noted in a Star Ledger piece of all places.

That hearing did not go as the Star Ledger story might have you believe.  MSV has culled from a number of sources on background what took place in Tuesday's Federal Court on the bankruptcy proceeding of the hospital and its numerous creditors.

It's rare for a lawyer to be publicly admonished for acts unbecoming but here's what the Star Ledger missed in its absence:
The claim by Donald Scrarinci he resigned is not a universally accepted fact either among MSV sources - to put it kindly.

As there are many attorneys who read MSV regularly, they can tell you what the potential penalties are for violating attorney-client priviledge, but let's say they aren't pretty.

Who was the lawyer representing Donald Scarinci at the hearing?  Word is it was a lawyer from his law firm.  The same firm also happens to be doing business with the City of Hoboken.  Can you say conflict?

If all accurate, what kind of lawyers behave this way and will the Star Ledger get to those facts any time soon?  They have missed a major development in the story.

For a Federal Judge to act so decisively in a hearing, the grounds must be very strong and it looks like HHI won this one going away.  But it's not likely to end there for Donald Scarinci, the long time friend of Senator Bob Menendez who has let's say a colorful and checkered history.

The decisive action on how the bankruptcy will proceed is still ahead scheduled for next Wednesday. 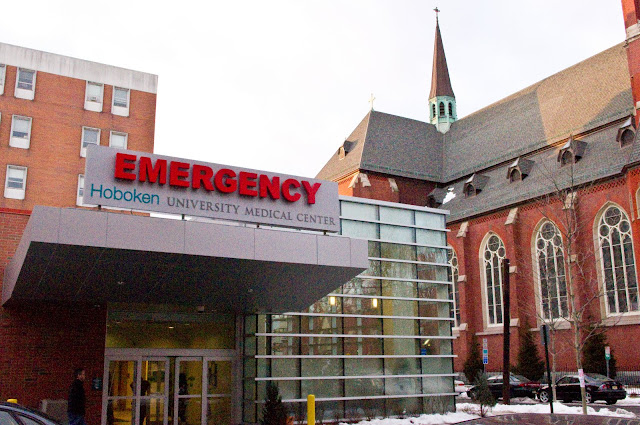 Talking Ed Note: This hospital sale faces obstacles but the credibility of the hospital board who has worked tirelessly to save the hospital isn't one of them.  While they won't discuss the details with MSV and speak on the matter, people who are familiar with the legal chatter can.

Perhaps the Star Ledger will catch up to their own story.