The Hudson Mile Square View is proud to present:


a Hoboken All in the Family Grifting Production

Now you can stuff your face to your heart's content
and get your fill of Hoboken's First Family of corruption all in one place! 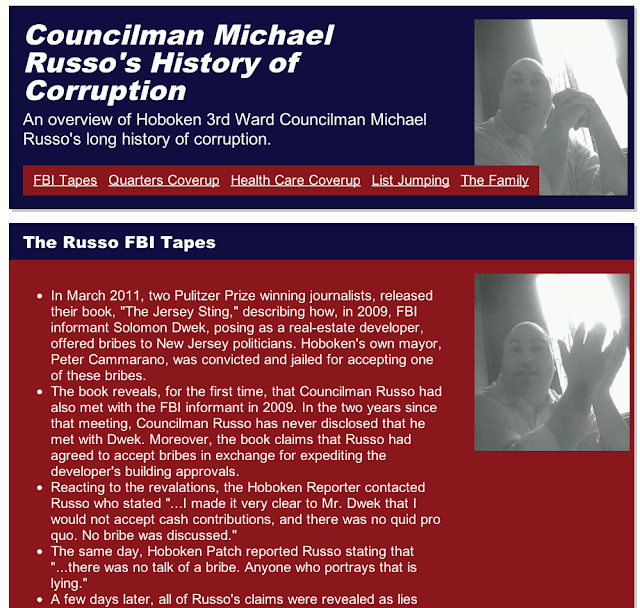 Cuz being full of shit and on the grift has its privileges.

Russocorruption.com
All Grift, All the Time

The Office of the Governor of NJ announces:

“It would appear that there are two primary issues that stand in the way of keeping Hoboken University Medical Center open. First, the refusal by local unions to provide necessary concessions and secondly, the city council’s rejection of $5 million in funding which is vital to securing the hospital’s future.

“It is completely unacceptable that the city council placed local politics ahead of the 1300 employees at the Hoboken University Medical Center and the people in the community who rely on the critical services provided by this hospital. This Administration is not going to allow political bickering to put this hospital in jeopardy and potentially have a negative and irresponsible impact on the city’s finances, which is why the state will contribute the $5 million, if needed, to ensure the Hoboken University Medical Center deal closes and the hospital stays open. With the availability of this funding, it is now up to the unions to ensure the hospital stays open, people continue to have access to emergency services, 1300 jobs are saved, and municipal default is averted.”

High level sources close to City Hall state should the hospital close, expect immediate substantial contraction in the City's workforce to make up for the heavy burdens to repay a $52 million bond and other related costs with a hospital closure.

"The City is committed to making massive layoffs in order to cover the costs," one of the senior sources bluntly stated.

At the same time, the City will be mindful to spare the taxpayer "to whatever extend possible," the source added.

After a hospital closure, the sources also warned to expect services to be hit "across the board."


Talking Ed Note: Similar to the Beth Russo hydra's attempt to strip the City of any surplus and catapult Hoboken's budget into crisis, last night's action is a continuation of the strategy to starve the city whenever possible to attack the Hoboken taxpayer.

The obvious intent is to force the mayor to increase taxes.  The strategy which will succeed this time should the hospital be closed will be opposed by some strenuous effort within City Hall.

The attempt by the Council of No to shut the hospital may in fact be stopped with a late development submitted in this early am guest piece by the hospital authority's chairwoman:


I have been working with our counsel and others since the irresponsible vote by the city council members Mason, Russo, Occhipinti and Castelano took place this evening where they refused to pass resolutions and first reading of an ordinance that would provide for the necessary funding to make a deal to maintain the hospital.

I would appreciate you publishing this new development so that employees of the hospital understand that the  HMHA and Mayor are doing all we can to keep this hospital open, even if certain council members don't .