Freeholder Anthony Romano is running for re-election on Column A under the (HCDO) Hudson County Democratic Organization next month November 8th.  He's also being supported at the uptown office of Councilwoman Beth Mason who has the HCDO signs up for Romano too.

Hoboken's Kurt "Giant" Gardiner is running against the Column A Machine as an independent candidate.  He's focused on issues central to Hoboken including taxes and services.  Hoboken taxes have risen consistently at the County level.  Sometimes people will confuse the increases as the tax bill consists of county, education and municipal.

Jamie Cryan is stated as the campaign manager for this race, but we've had no confirmation of such although he's been contacted on setting up two forums between the candidates. 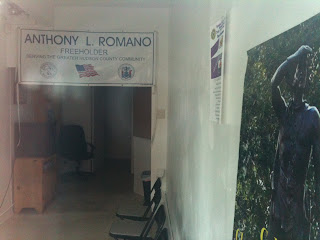 Talking Ed Note:  According to a post by Grafix Avenger, Anthony "Stick" Romano attended the BoE meeting last night along with other interested parties of late.  Hoboken's BoE has a surplus and has some practically panting to get their hands on it.

You think the BoE is an educational institution, they think it's a jobs/favor bank.
Posted by SmartyJones at Wednesday, October 12, 2011
Freeholder Anthony Romano opens office on Washington St.
2011-10-12T08:39:00-04:00
SmartyJones
Comments