Foes against saving hospital lash out with robocall

Readers are noting once again a nefarious effort to dirty up Hoboken's victory in saving the hospital.  We've received word of this by email and commenter khoboken posted:

Speaking of cockroaches that love corruption soup, did anyone else get the weird phone pre recorded call tonight from this guy with a very creepy voice spewing lies about Mayor Zimmer selling the hospital to an out of state develoepr that is going to put up a high rise in the middle of town (but he did acknowledge the payment of the 52M in bond debt)? Press 1 if you agree with the sale, press 2 if you dont agree with the sale. More Mason Money thrown down the drain.


At least get a guy that doesnt sound like a child molester to make the tape.

Another email report says this is showing as coming from a 201 number. Make a tape.

Next stop, the Hoboken City Council meeting next Wednesday.  Since the Old Guard couldn't undo the hospital sale thanks to New Jersey Governor Chris Christie stepping in, what destruction will they plot to hurt Hoboken with next?

Tune in next Wednesday as MSV will carry the meeting live so you can be witness to the Old Guard sabotage courtesy of the Beth Russo hydra.


Does the sabotage against Hoboken ever end with these people?  Ever?
Posted by SmartyJones at Thursday, October 13, 2011
Foes against saving hospital lash out with robocall
2011-10-13T22:07:00-04:00
SmartyJones
Comments

A Hoboken police officer crashed his personal car into several vehicles before flipping over his own on Clinton Street 3:30 this morning apparently due to driving while intoxicated.  Officer James Miller was inside the vehicle as it lay on its side in the middle of Clinton Street when police arrived on the scene, this according to a story reported in the Jersey Journal.

The story adds Officer Miller will be assigned to desk duty pending the outcome of DWI charges.

MSV has had conversations with Officer Miller on two occasions and showed him our mighty Pentax K-7 camera suggesting he look into it for his family as he was interested in some samples we looked over.

After the vote on the hospital bond, the HMHA Chairwoman Toni Tomarazzo stood from the second row saying, "You just killed the hospital."  Da Horsey followed blurting out from the first row on the left of the Council Chambers, "Congratulations on killing the hospital," to Council members Terry Castellano, Beth Mason and Michael Russo.

Russo then began yelling for an officer to come over and throw Da Horsey out.  Officer Miller came up and then asked for Da Horsey to hit the exit but we told him Mike Russo was not running the meeting.

Council President Ravi Bhalla then asked Officer Miller to stay on the side and remain available should anyone become out of order while giving a warning to Da Horsey, the Calicchio brothers and others left in the audience.  Minutes later calm returned as the room emptied leaving only five members of the public.

Although the meeting ended uneventfully, we're sorry to hear about this incident.

What is the true cost of corruption in Hoboken? 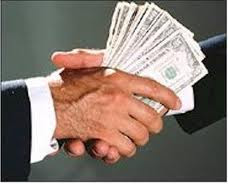 There's chatter about the cost of New Jersey's municipal services to the taxpayer but a factor left out of the equation is the cost of corruption.  As the number of municipalities in the state of New Jersey is greater than in California, the age old problem of having so many school districts, fire and police departments is well known in higher costs to its residents.  The cost for corruption however much less so.  People know its there.

In Hoboken under the Zimmer Administration measures were taken via audit, one last December and corruption discovered such as the Russo family grifting of health benefits costing taxpayers approximately $100,000 after ex-mayor Anthony Russo got out of prison.  (Somehow he found himself back on the taxpayer roles under Mayor Dave Roberts.)  When Councilman Michael Russo discovered the results of the audit, he complained not about the results but why the audit was conducted in the first place.

In the first ever media interview with the recently passed State Fiscal Monitor Judy Tripodi in 2009, she mentioned steps she took to stop corruption that was so visible she had no choice.  She added to MSV off the record other steps she took to see employees come and go on time adding time cards for all city employees.  One of her first steps is said to be her firing of Assemblyman Ruben Ramos' mother who held not quite a no show job, but most definitely a patronage position for no valid city service.

There's whispers Mayor Zimmer has acted on a number of fronts, probably in line with her efforts and then Business Administrator Arch Liston who came on board later and  has a nose for such things.  It would be interesting to know just how many things they've uncovered and what the savings is to Hoboken.  The mayor is more likely to fix the problem and move on and not make hay out of it.  But maybe she should.

MSV would OPRA corruption, but no one would volunteer and give answers to such an unspecified request.  Da Horsey hears the legal area in town was rife with discoveries when the Zimmer Administration took over after the fall of Peter Cammarano.  As part of those endemic problems in Hoboken, one story heard is the legal office was locked up for a week as "the problems" were being shredded.

The Administration is too professional so none of the details leak, but darn we sure wish they would.  In one of the smartest outsourcing moves to date, the Zimmer Administration called in the Feds for intrusion into the city systems.  Two city employees in IT are gone and the fruit is yet to be borne.  It should be a bonanza when it does.

Talking Ed Note:  Setting a price to corruption is far easier than putting a cost to the moral corruption that exists here.  The tale of the two cities has never been greater, one wishes to operate with professional standards in the 21st century and the other wants to continue the old, dark ways as back in the "On the Waterfront" days.

The two can not co-exist.  The most recent glaring example of the moral corruption variety was the attempt by the Beth Russo hydra to strangle the sale of the hospital.  Faced with running out of money and days from closure, they claimed killing a bond ordinance of $5.5 million on FIRST READING benefits the taxpayer.

The closure of the hospital would have struck Hoboken first with an immediate bill of $52 million for the bond guarantee plus untold liabilities to close the institution.  We're not clear on what the final bill would have been. No doubt it would have been far higher.

It would have devastated Hoboken, the objective of a meeting earlier that day with political operatives near the site of the now defunct Russo Civic Association.  The Beth Russo hydra seeing its first chance to derail the sale, went all in and pointed the finger at the mayor before the ordinance was even killed.  Councilwoman Terry Castellano first out of the gate, claimed there were other bidders before she concluded by attacking the mayor.  As if.

It was all premeditated and MSV puts it atop the list of moral corruption in Hoboken.