Beth Mason is pushing all of her last remaining chips in for one last attempt to stop or dirty  the victory Hoboken will see with the Hoboken University Medical Center staying open.  Next week the sale will be finalized and Mason who at one time fought against the City of Hoboken purchasing it back in 2007 is now doing everything she can to destroy it.

A commercial airing on Fox News and online where no opposing views are permitted, the fascist ubermensch censorship loving Mason website Hoboken411 is running the following:


MSV spoke in public portion at Wednesday's City Council meeting noting Beth Mason had pushed one failed bidder, P3 (with JNESO the nurse's union) and if she had not had conversations with them during the time leading up to the sale to Holdco, we'd "love to hear it." This time Beth Mason did not ask for time to "respond" on the matter and remained silent to the charge.

The previous regular council meeting MSV charged her with calling Hoboken411 "a news source" and publicly supporting a fascist website where censorship was the order of the day. To this Beth Mason responded not to the charge but that she did not own or control Hoboken411.

This commercial is strewn with lies and distortions.  Namely it overlooks the reality the parking agreement is a continuation on an earlier 99 year agreement and the current revenues negotiated exist only while the property remains a hospital.  Ian Sacs corrected her factual errors on the revenues and MSV published that video (below).

As many are aware the discussion of the parking agreement was extensive at the last City Council meeting although it's actually scheduled to be discussed on Tuesday. The reason is Beth Mason and her Beth Russo hydra allies had no interest in discussing the merits of the refinancing of the midtown garage beyond voting against it and creating a gaping hole in Hoboken's budget to the tune of millions of dollars forcing the City into immediate layoffs.

At the Council meeting, Beth Mason vociferously complained the refinancing of the midtown garage was separate from another vote scheduled for Tuesday on the hospital's parking agreement under the new owners Holdco.

Does anyone believe Beth Mason did not want to see them together so she could complete her sabotage and see the hospital deal fail and the 150 year institution closed?

A victory for all of Hoboken is no victory for Beth Mason.  She and her allies failed but they are going down in the most bitter way possible with Hoboken days away from seeing the hospital saved and a hangman's noose of a $52 million bond guarantee removed.


Talking Ed Note: Beth Mason responded to the criticism of her involvement with the failed bidder P3 after the meeting ended. She walked past Da Horsey and after an icy stare stopped ten feet having walked past and cocking her head to say, "You better be right." The immediate reply, "We'll be right and you're going to have some explaining to do" ended the impromptu discussion.

MSV said in the meeting a story would be forthcoming "the next day" on the matter but more important news has taken precedence. This story is only the latest evidence of the sabotage deployed by Beth Mason to hurt the hospital sale and all of Hoboken. After the important matter of the hospital sale is completed, MSV is anticipating a series on just this topic.

While no explanation is expected from Beth Mason for her destructive actions against Hoboken, the truth will be told here nevertheless.

As MSV predicted, the "Big Lie" technique would be coming out in force after the action forcing layoffs by the Beth Russo hydra last Wednesday.  And so it's begun. 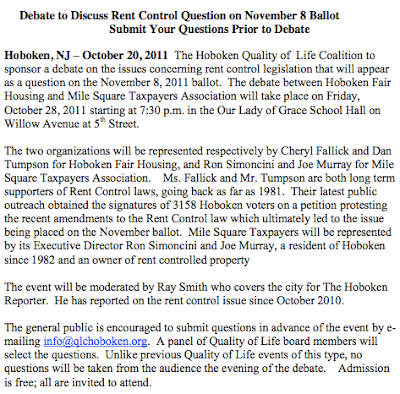