Councilwoman Beth Mason is seen here flouting her obstruction on the bond to upgrade dangerous, rusty equipment for environmental services and the police infrastructure.

When she comes out saying she doesn't support the bond ordinance, Councilman Peter Cunningham notes the items have been on the table for four months.  He asks her to specify what her objection is and Beth Mason starts making excuses but can't say what the problem is why she won't support the bond.

It's eerily similar to what happens next on the following ordinance that has resulted in layoffs about to be forced onto Hoboken unnecessarily.  That now infamous bond ordinance blocked by MORTe, Italian for death and stands for Mason Occhipinti Russo and Terry Castellano.


Here's Beth Mason caught in a web of her making last Wednesday.  It's obvious there's a preordained execution planned by MORTe.  The City is depleted of essential equipment for basic services, the Police loose needed repairs at their building and City workers now face the ax for Thanksgiving and Christmas.

Previously MSV scooped everyone with an earlier exclusive eyewitness report: Hoboken felon Peter J. Cammarano, the ex-mayor who proudly talked about grinding opponents into powder while collecting $25,000 in bribes was on the loose in Hoboken.

Today MSV presents the evidence with another first - an exclusive photo! 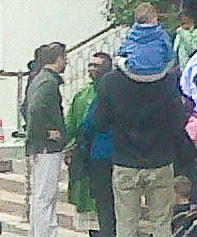 Taken Sunday morning outside of St. Peter and Paul Church on Hudson Street, the ex-mayor Peter Cammarano (l) is seen speaking with Fr. Benny and was with the mysterious brunette believed to have kept the house where his family once lived while away in Lewisburg Federal Prison.

The prison trim Cammarano is said to no longer be sporting the arrogant scowl he carried before and even after his arrest.  Another witness said he was seen shortly thereafter returning to his brownstone on upper Bloomfield St with the same woman.

Cammarano is listed with the Federal Bureau of Prisons as slated for official release next March.  He's thought to be residing in a Brooklyn halfway house where he's allowed to leave on weekends.

Talking Ed Note:  There's no issue here with Cammarano seeking forgiveness for his soul.  His legacy however is not past as the people who brought Cammarano's brand of corruption to Hoboken are still holding keys to the kingdom.  They adopted newly transplanted Hoboken resident Tim Occhipinti and pushed his new and unthreatening visage as an "independent" onto unsuspecting and less knowledgeable residents.

Hoboken has been paying a price ever since with the self-proclaimed independent Tim Occhipinti acting as a puppet for the worst elements in town.  Just last week Tim Occhipinti cast a critical vote to throw Hoboken's budget into critical mass shortchanging it to the tune of millions of dollars.

That action by Occhipinti, Beth Mason, Terry Castellano and Mike Russo forces the City to begin across the board layoffs.  It was completely unnecessary but like Peter Cammarano, the actions by the Mason-Russo hydra is intended to grind opponents into powder even if it means cutting the throats of the people they claim to represent.

Via the Beth Russo hydra, the corrupt legacy of Peter J. Cammarano lives on.


Picture courtesy of Hoboken SuperMom.  All right reserved.  That means photo thief Perry Klaussen at Hoboken411 and any other Scott Delea theft imitators.