UPDATE: Mayor Zimmer will be holding a press conference this morning at Hoboken University Medical Center.  MSV will be covering it.

The City Council special meeting this Sunday concerning the urgent matter of the Hoboken University Medical Center will be held Sunday evening in City Council Chambers at 6:00 in the evening.

The meeting had earlier been planned for Sunday 9:00 am.


MSV does not normally urge people to come out to meetings.  While we think its important for civic participation to vote and at least see one or two meetings in person to obtain true clarity on what is transpiring in our mile square, this meeting may be the most important for the City Council in years.

The stakes could not be higher.  The hospital sale scheduled for transaction Wednesday is now in an open ended 20 day situation with next to no funds to operate.  The City Council will again have an opportunity to remove that jeopardy and allow the sale to close.

Your homes are now at stake, not just the hospital.  If you have never spoken your mind, now is certainly the time to do so.  Although it's the weekend, there's a lot more weighing in the balance than that one day.

Talking Ed Note: MORTe is intentionally destroying the economic freedoms of this town by putting the City and the hospital in a continuous state of jeopardy.

Time to show you care about Hoboken!  Please pass this on to your colleagues and contacts.

Get the facts on Public Question #2.  Submit your questions prior to the debate at info@qlchoboken.org. Quality of Life Coalition to Host Rent Control Debate The issue is on the ballot on Nov. 8 in a public referendum.
By Claire Moses
http://www.e-securemail.net/mail/link.php?M=134157&N=380&L=255&F=T Before the people of Hoboken get to decide on rent control in a public referendum on Tuesday Nov. 8, they'll get a chance to understand the issue further by attending a debate about it on Friday night.

Tenant advocates have been fighting to get the issue on the ballot http://www.e-securemail.net/mail/link.php?M=134157&N=380&L=256&F=T , and the Hoboken public will be able to vote on election day on Nov. 8.

The debate, which is being organized by Hoboken's Quality of Life Coalition, will take place at 7:30 at the Our Lady of Grace School Hall on Willow Avenue at 5th Street and moderated by Hoboken Reporter staff writer Ray Smith.

The two organizations will be represented respectively by Cheryl Fallick and Dan Tumpson for Hoboken Fair Housing, and Ron Simoncini and Joe Murray for Mile Square Taxpayers Association.

The issue of rent control has come up, after the city council amended the decades-old law last winter. http://www.e-securemail.net/mail/link.php?M=134157&N=380&L=257&F=T
Tenant advocates have been worried about the issue, among other reasons, because the new law institutes a two-year period of repose, http://www.e-securemail.net/mail/link.php?M=134157&N=380&L=258&F=T
no matter how long rent has been overcharged.

The general public is encouraged to submit questions in advance of the event by e-mailing info@qlchoboken.org
http://www.e-securemail.net/mail/link.php?M=134157&N=380&L=259&F=T. A panel of Quality of Life board members will select the questions. Unlike previous Quality of Life events of this type, no questions will be taken from the audience the evening of the debate.
Admission is free; all are invited to attend.

The Hoboken Quality of Life Coalition to sponsor a debate on the issues concerning rent control legislation that will appear as a question on the November 8, 2011 ballot. The debate between Hoboken Fair Housing and Mile Square Taxpayers Association will take place on Friday, October 28, 2011 starting at 7:30 p.m. in the Our Lady of Grace School Hall on Willow Avenue at 5th Street.

The two organizations will be represented respectively by Cheryl Fallick and Dan Tumpson for Hoboken Fair Housing, and Ron Simoncini and Joe Murray for Mile Square Taxpayers Association. Ms. Fallick and Mr. Tumpson are both long term supporters of Rent Control laws, going back as far as 1981. Their latest public outreach obtained the signatures of 3,158 Hoboken voters on a petition protesting the recent amendments to the Rent Control law which ultimately led to the issue being placed on the November ballot. Mile Square Taxpayers will be represented by its Executive Director Ron Simoncini and Joe Murray, a resident of Hoboken since 1982 and an owner of rent controlled property.

The event will be moderated by Ray Smith who covers the city for The Hoboken Reporter. He has reported on the rent control issue since October 2010.

The general public is encouraged to submit questions in advance of the event by e-mailing info@qlchoboken.org. A panel of Quality of Life board members will select the questions. Unlike previous Quality of Life events of this type, no questions will be taken from the audience the evening of the debate. Admission is free; all are invited to attend.
Posted by SmartyJones at Thursday, October 27, 2011
Rent Control Debate Friday night at OLG
2011-10-27T20:39:00-04:00
SmartyJones
Comments 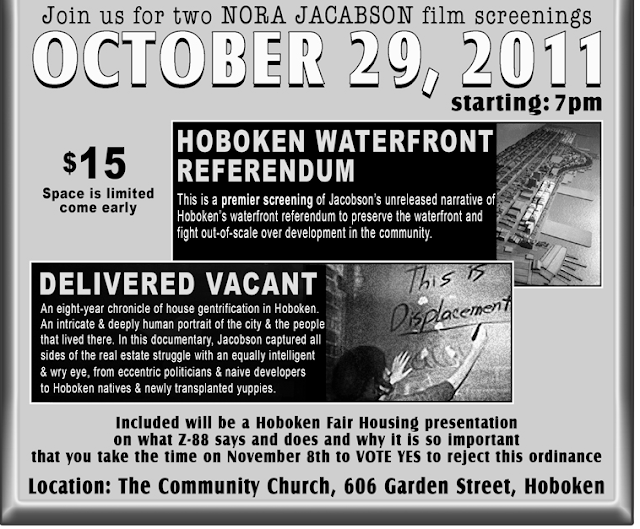 Death Match 2011: Mayor Zimmer vs MORTe with the hospital's life and Hoboken's financial health the stakes

With a call for yet another special City Council meeting this Sunday, the Zimmer Administration takes another turn to stave off the Beth Russo hydra in what can only be accurately described as a full on death match over the hospital and Hoboken's very financial health the stakes.

The latest move to get Hoboken University Medical Center to the finish line - and alive - involves a deft maneuver shifting to a special meeting where five votes via resolution scores a win.


The hospital sale stands in a deteriorating satellite position, unable to maintain its orbit and slowly crashing to earth with each passing second.  The closing of the sale to Holdco scheduled yesterday was cancelled due to the question of the "enforceability" of the parking agreement - as stated in a letter by Holdco released earlier yesterday.  (Available on page 3 of City Hall's release below.)

The Beth Russo hydra or MORTe quickly acted to oppose the move that would cost Hoboken zero and everything to gain.  One simple yay vote among MORTe would have put the whole hospital matter to rest, saving the 150 year institution and with it defease a $52 million bond guarantee hanging over Hoboken resident's heads.  It's unknown if they knew their votes would keep alive their consistent effort to sabotage the hospital's sale.

Regardless of who knew what on the emergency resolution vote, the latest legal tactic by the Zimmer Administration is sure to enflame the City Council further with the supporters of the mayor likely to back the latest resolutions Sunday while MORTe (Mason, Occhipinti, Russo and Terry Castellano) will once again look to undermine the hospital and attempt to finish it off by running out the clock.  A millisecond won't pass before they then point the finger and blame the mayor.


As if the stakes are not already sufficiently high, the City is not certain the legislation's passage on Sunday will finally end the matter.  Councilwoman Beth Mason who verbally stood behind the mountains of misinformation she has been feeding the public over months on the hospital sale at the last meeting, may now take the next step and put together an army of lawyers to take on the City in yet a new front in a war where her ultimate objective is the death and shuttering of Hoboken University Medical Center.

Beth Mason and her MORTe allies say they take these actions such as voting down the refinancing of the midtown garage "for the taxpayers" even as their actions tell a completely different story.

The City just failed to obtain approval for an emergency appropriation to cover various legal costs for the bankruptcy on the hospital and related rent control snafus that are an outgrowth an almost continuous fight between rent control tenants and small homeowners.

The request for first $600,000 upped to $700,000 at the meeting was immediately denounced by Beth Mason.  Considering the failure to get those  legal bills paid, Corporation Counsel Mark Tabakin said he would advise those performing legal services for the City to cease the next day.

How that affront to the legal community will empower the City to retain assistance and enter into a blood and guts legal battle with Beth Mason is completely unknown.  Law firms do initial work on appropriation and anticipate good will for the extra man hours required to fulfill the due diligence necessary to get the work done.  But the City's standing in the legal community is not faring well after the rejection on paying its legal beagle bill Wednesday night.

Yesterday, a letter from Holdco's attorney confirmed the veracity of Corporation Counsel Mark Tabakin's urging the City Council to vote to make effective immediately the passed parking agreement so the hospital could close Wednesday.  The letter stated the closing did not take place as the terms were not met based on the action the previous evening by the City Council - actually the Beth Russo hydra.

MORTe stood united once again to shoot down the resolution that required a two-thirds approval of six votes.  That unity gave life to Beth Mason's year long effort to see the hospital sale undone.

Actions for weeks leading into the closing left the Hoboken Hospital Authority no room to maneuver.  The hospital sale to Holdco is either completed or the hospital is closed.  Even with this stated repeatedly, MORTe has acted at best cavalierly and at worst with conspiratorial contempt to bring about the worst outcome.

If anyone doubted their bad intentions on the hospital and Hoboken overall, within the span of a just two weeks, MORTe voted down a bond refinance for the midtown garage even with advanced warning doing so would cause City layoffs while sucking the oxygen out of the hospital sale since.

Alternatively, MORTe also sneered at the refinance adding $50,000 annually to the City, embracing destruction for the workers they claim to represent. Their verbal denials on culpability are just a snippet of their plans to come.

With the latest showdown set, the Zimmer Administration must be already searching for a way to put together an army of lawyers after Sunday's special council meeting.  Awaiting them on the other side will be an equally strong or stronger team of lawyers ready to do battle paid for by Beth Mason's husband Ricky.

Talking Ed Note: Are you ready for a war?  There's nothing less at stake than the hospital and the City's very financial health.
Posted by SmartyJones at Thursday, October 27, 2011
Death Match 2011: Mayor Zimmer vs MORTe with the hospital's life and Hoboken's financial health the stakes
2011-10-27T08:10:00-04:00
SmartyJones
Comments