Councilman Peter Cunningham as he stated on Sunday brought back the refinancing for the midtown garage with the expectation the hospital sale will close this Friday.

MORTe (Mason, Occhipinti, Russo and Terry Castellano) quickly returned to its obstructionist tactics since collapsing on blocking the last component of the hospital sale Sunday voting again in lockstep against the refinancing.

The refinance of the midtown garage is a legal requirement with the new owners Holdco coming in as a taxable entity.

Previously MORTe would not provide a sixth vote so the City of Hoboken could save $50,000 annually via lower interest rates in a refinance and meet IRS requirements for the taxable portion of the garage's use.

Previously MORTe did not address the savings to the City and made no financial argument why it was necessary to vote to blow a $4.5 million hole in the City's budget on a straight forward refinance.

The Administration has already gone on record saying they will respond to a hole being blown into the budget by MORTe with City layoffs.

MSV in its exclusive premium content noted that a high level source said, "everything is on the table" to meet any potential $4.5 million budget gap needlessly created, including police and fire.

Talking Ed Note: Councilman Tim Occhipinti acknowledging lower interest rates on a refinance midtown garage would be beneficial.  It's not clear why Occhipinti then followed by voting against the ordinance on first reading.

During New Business Councilwoman Terry Castellano bitterly stated "the sky did not fall" with the hospital sale close now set for Friday and not talking place Tuesday as originally stated by the mayor.

Mike Russo had earlier mocked the hospital's situation similarly at the previous special meeting last Tuesday with, "the sky is falling, the sky is falling" when the parking agreement's going into effect immediately was shot down by (MORTe) - Mason, Occhipinti, Russo and Terry Castellano.

That action by MORTe caused the original closing date last Wednesday to be missed. 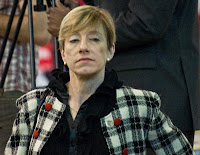 Councilwoman Beth Mason has brought back the cameraman filming the council meeting.  We'll see what footage she edits with the usual package of lies for the next political operation she launches on the fascist website Hoboken411 where free speech is never allowed.

That's the way she likes it.

Next: Evidence of MORTe's lies on their "agreement" with Holdco.

Tonight's City Council is a more low key affair. One question not clear is if the bond refinance for the midtown garage will be brought back tonight. Sunday City Councilman Peter Cunningham stated the ordinance would be brought back as its passage would stop the $4.5 million deficit blow out leading to City layoffs.

Let's see if MORTe will actually stop putting the lives of residents at stake for its political agenda.

Leading into the meeting it's unclear if it will be introduced tonight and it's not on the agenda.

Talking Ed Note: Please be aware you can now watch the City Council meeting on an iPad.
MSV knows there is a substantial amount of people who use the device so please note it's an option.

Mayor: Everything set for hospital sale on Friday

Mayor Dawn Zimmer in a twitter moments ago announced Hoboken University Medical Center's sale to Holdco delayed a week ago due to the intransigence of MORTe - is set for Friday.

"Just received word everything in place for sale of Hoboken University Medical Center on Friday."

The finality of the sale comes with HUMC under pressure with dwindling cash reserves.  The creditors committee has also had to sit by and watch their settlement of about a 30% on the dollar decrease with each passing day the sale is not completed.

On Friday, Hoboken and the hospital should finally be able to exhale a sigh of relief.

Talking Ed Note: Even after a devastating legal analysis offered earlier by "Not Stempler" on Grafix Avenger, Councilwoman Beth Mason is still attempting to claim credit along with the "council minority" for the success.  Their so called worthless, non-binding "agreement" has the same legal authority as if the nation of Cuba negotiated the sale terms as in none.

After the introduction of the so-called hospital side deal the council minority claimed took place with Holdco as presented by Beth Mason Sunday night, Councilman Dave Mello was next to speak.

The Councilman had a few things to say about the behavior exhibited in the council minority's claim.  He added some background on the history of the midtown garage, its donation for all intents and purposes by St. Mary's for one dollar and added his own little bedtime story to counter earlier veiled accusations by Councilman Mike Russo at a previous meeting.

The jammed pack crowd in attendance greatly appreciated his statements of fact.  They also thoroughly enjoyed his retelling of a bedtime story to his daughter about Rapunzel.  This was no hollow analogy to the "boy who cried wolf."

Here is Councilman Mello burn'in down the house:


Related: Grafix Avenger's legal department re: "Not Stempler" provided his analysis of the self-proclaimed side deal by the council minority.  It's equally devastating as Councilman Dave Mello's dismantling: