Beth Mason: 'Interfering with City legal matters is in my DNA'

Beth Mason is back and interjecting herself into another active legal matter facing the City but this one isn't the active FBI investigation, it's a sexual harassment claim by a Hoboken Parking Utility employee against her supervisors.

City Council members do not manage active litigation on personnel matters against the City of Hoboken but Beth Mason is making political hay on the suit.   While the City has not been served, the civil litigation was filed in Superior Court.

Last summer, in her abbreviated term as chair of the City Council, Beth Mason sponsored a resolution to see released tens of thousands of emails between the mayor's office and a list of media sources.  Atop her target list: three Reform oriented good governance websites: The Hoboken Journal, Grafix Avenger and Mile Square View.

The investigation of the City Hall Data Theft Ring by the FBI continues with IT Manager Patrick Ricciardi arrested and at least several current and former City officials involved but not named. The FBI criminal complaint states Ricciardi began his massive looting of the mayor's office communication in early 2010 - the exact timeframe and information sought by Beth Mason and Michael Russo in their resolution.

At the last City Council meeting, MSV spoke in public portion and stated Councilwoman Beth Mason and Michael Russo had been asked repeatedly over months to answer yes or no if they had seen any of the emails requested in their resolution originally issued in April a full month before the FBI began their investigation at City Hall.  Mason interrupted at least a half-dozen times finally voicing a denial.

After Patrick Ricciardi's arrest Michael Russo told Hoboken Now he did not receive emails from the IT Manager and Beth Mason is now on the record claiming she did not see them.

Talking Ed Note:  Since a series of press releases leading into the sale of Hoboken University Medical Center, local media often ignore Beth Mason's releases in their entirety.  MSV is releasing this one so the full Hoboken public can see what Beth Mason is doing in yet another active ongoing legal matter involving the City.

Hoboken411, the heavily censored website where Beth Mason runs her political operations has not been posting her releases regularly either. 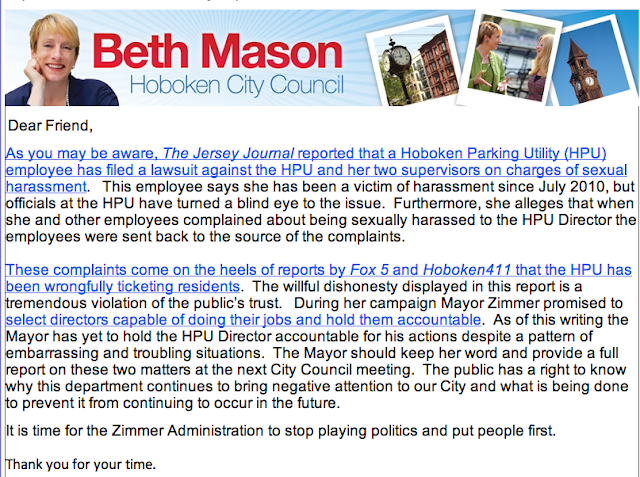 Grafix Avenger: All I want for Christmas is more turkey

Grafix Avenger who has irritated more than her fair share of the Old Guard especially their convert Beth Mason penned her latest satiric howler "FBI Letter no. 10" and it's scalding hot under the lights.

It's unclear if the turkey in question is in fact the Hub MSV noted in last week's premium content but in the end it makes little difference.  The fowl creature in her letter is noted for having the heat gradually increased until it squealed giving up other fowl creatures.  With all the Old Guard turkeys wandering about, it's a target rich environment.

Tim Occhipinti the occupant of the 4th ward council seat contacted the police last summer complaining about an earlier satirical FBI letter calling it a "credible threat." Letter no. 10 does indeed sound like a credible threat but what does the Old Guard do under the circumstances as they are the fowl in the FBI's sights?

Okay Tim, sit by the phone for further instructions and a binder should be arriving shortly.  Or not.

Talking Ed Grist for the Mill Note:  The Old Guard likes having the Mason wallet available but after cashing in and making a ruckus on everything from the hospital sale to the budget surplus, behind the scenes they are less than kind hearted in talking about the 2nd ward Councilwoman.

In addition to saying she has no voting base, they add they don't like her.  Some "allies" say far worse.
Color Da Horsey shocked.
Posted by SmartyJones at Tuesday, November 29, 2011
Grafix Avenger: All I want for Christmas is more turkey
2011-11-29T08:52:00-05:00
SmartyJones
Comments

The Hoboken Association for Pre-school Parents (HAPP's) has launched a new website (www.hobokenpreschool.com) that includes tools to help parents make decisions about the 2012-13 school year.  The application process for most preschools runs from December – March; HAPP’s provides a consolidated listing for open houses, school locations on a customized map, and comparative data such as application deadlines and toilet training requirements.  There is also information for parents transitioning from preschool to Kindergarten. The HAPP’s website saves parents time and effort by providing comprehensive admission information in a "one-stop shop" format. The site also offers an insider glimpse into the experiences of parents with children currently enrolled in various programs via a unique forum.

About HAPP’s
Julie Steinberg founded HAPP’s in the summer of 2011 as a google group for parents with children in the Hoboken early childhood program.  Since then, it has expanded to cover the broader preschool community in Hoboken.

This group is a volunteer organization operating independently of the Hoboken Board of Education.

HAPP’s mission is to (1) keep the parents of children enrolled in the Hoboken public early childhood program informed on all relevant matters, meetings, and events, and (2) facilitate online and offline community building for pre-school parents and their families.
All are welcome, including families in the public, charter, and private early childhood education communities. Please visit us at www.hobokenpreschool.com