A suspect story appearing on Hoboken Patch about a shadowy Facebook page, Occupy Hoboken Parking is becoming a tad more interesting with its anonymous "Hoboken mom" and some other shady Masonic figures coming in from the cold.

Earlier today, the Wiley Coyote, Eric Kurta toyed with the wannabe occupiers with a couple of posts.  This one was amazing in its brevity, scope and beauty:

That one didn't last long before being deleted but another post on a related matter stayed up for a spell: 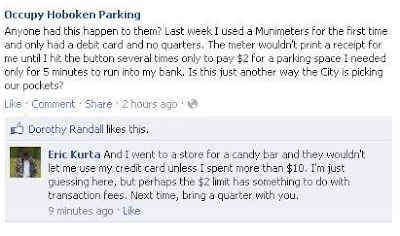 But then that post too soon found its way into the ether.


Then guess who showed up but Hoboken's number one Mason backing fascist for local censorship:

Da Horsey posted because we don't expect that to last either.  The Facebook page founder, a self-proclaimed mom is remaining anonymous but another name surfaced and it's someone who was enamored with the Tim Occhipinti campaign a year back who is among the last of the rabid cult worshipers of the Masonic Temple of Hudson St. and she's pictured here below scaring the beejeezus out of Timmy.


And wouldn't you know it, she's posting there too. What a Masonic coincidence! 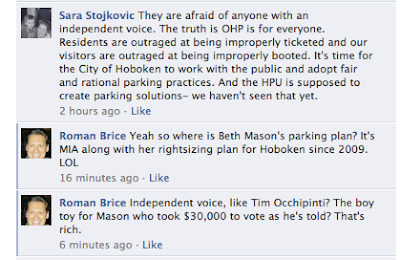 We posted some on the page because we know it's destined for the ether too but who cares, the universe hears the truth and now so does Hoboken.

Okay, who's going to break the bad news to Claire at Hoboken Patch?

If you are up for a little fun and want to play with the Masonites, here's the link:
https://www.facebook.com/pages/Occupy-Hoboken-Parking/249664028427617?sk=wall

Apparently, this could be one of the political operations Perry Klaussen was crowing about that he and his crew had lined up.  But it's being led it appears by the little grocery that is upset with their parking tickets.
https://www.facebook.com/profile.php?id=1794274156&sk=wall

And ticketing for people parking into the yellow areas on the street:
Anyone sick to death of tickets in Hoboken for parking a few inches over the yellow line. Time for an Occupy the HPU.on.fb.me/uYASXz <http://t.co/LGucWQ1m>
11 Nov <http://twitter.com/#!/littlegrocery/status/135065227854225410>


And complaints going back to last month:
https://www.facebook.com/profile.php?id=1794274156&sk=wall

Update: This whole Facebook page looks like one person who is unhappy with getting tickets and has been quickly adopted by the the last of the Masonite diehards.  And they are deploying censorship liberally just like on Hoboken411.

It appears Perry Klaussen occupied himself with a bizzarre appearance on Patch: 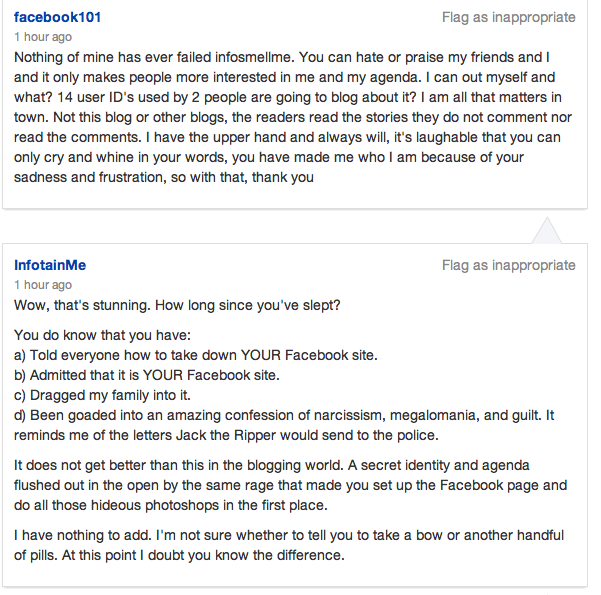 What's interesting is Klaussen's admission of greatness in his own mind.  Beth's checkbook causes some weird behavior in folks.

On a serious note, Peggy Randall, the Little Grocer doesn't like parking tickets.  Who does?

Changing parking rules isn't hard.  Just go to Tim Occhipinti and have him rewrite it and pass the changes.  (Peggy that will take real work so good luck getting either out of Tim or Beth Mason.)

Okay, there's one thing Da Horsey has heard and it's that the Little Grocer has great pies!
Correction: Wrong store: it's Diane's on Jefferson St. with the great pies.

Mayor Dawn Zimmer will host a ribbon-cutting ceremony at Hoboken University Medical Center to officially hand off the hospital to its new leadership team.  The Mayor will be joined by state and local officials, including Lieutenant Governor Kim Guadagno, to celebrate the hospital’s completed sale and transfer of ownership.  The Mayor will discuss the hospital’s bright future and invite Hudson County residents to rediscover Hoboken University Medical Center.