The TV report isn't a day past on Fox5's "follow up" report on the Hoboken parking and questions are starting to come up around the impetus behind the story.

MSV's commenters a battle tested, intellectually rigorous bunch may have uncovered some useful information.  The first issue is did Joel Waldman report on this story as part of a real investigation even as it looks like he is a Hoboken resident himself?  If so, how long has he resided in Hoboken and why was a story on parking chosen to be done at this time?

As important if not more, shouldn't Waldman have disclosed he resides in Hoboken?  That would give credibility to the report if the story in fact held up to scrutiny but that too may now be in question.

One poster notes Waldman not only lives on lower Willow Street but he had a Beth Mason sign in his window during an election.  Lower Willow is nowhere near the second ward so that can only mean Waldman was a resident at least going back two years to the mayoral election.

This all raises more questions than answers including what relationship Waldman had with Beth Mason before this became a story.

Update: Joel Waldman was in fact previously a resident of Hoboken.  It's unclear for how long and what prior relationship he may have had with Beth Mason including publicly backing her.

Talking Ed Note: Thanks commenters for adding to the MSV workload, I think.  In the interim, someone noted you can leave comments on the Fox5 story and Waldman is getting bruised:

MyFox NY did a "follow up" report on Hoboken parking in the typical heavy handed TV news production style interviewing a number of people who received parking tickets and sitting down with Councilwoman Beth Mason.

Splicing parts from its earlier report, it painted a picture of a city using parking enforcement to make up for a bad economy and cited the increased ticketing from the previous year showing ticket revenues up almost 20%.

Mason noted she's been contacted by constituents on parking which is interesting in that she's rather infamous for ignoring people who attempt to contact her on issues in the Second Ward as one resident who attempted to do on the Monarch project and later complained about being ignored in a letter to the Hudson Reporter.

In the video Mason says the enforcement "has gotten a little out of hand" but doesn't say what should be done to change the existing policies to improve the decade old parking rules and the four hour limit that is designed to give residents better parking opportunity.

MSV heard there was going to be a follow up report but at least one Hoboken resident who spoke to Fox on camera ended up entirely on the cutting room floor.  In the story, the people who complained about the ticketing don't appear to be Hoboken residents.  Two sisters were highlighted as new residents and received a boot on their first day in town and may have been the exception.

So if MyFox and Mason have gotten all these complaints from Hoboken residents how come they aren't shown? Most of the people on camera appear to be non-residents parking at meters.  How do you get booted for a four hour violation at a parking meter?

Is Beth Mason going to right size the parking problem like her 2009 mayoral platform promised to do for all of the city?

Well MSV is looking forward to the rewritten legislation from Mason altering the four hour parking rule. She's been in office since 2007 and if she has a proposal let's see the legislation in writing.

Talking Ed Note: Late afternoon crossing 13th and Hudson with a green light in the crosswalk a Canada Dry ginger ale truck came out of nowhere and within inches of pasting Da Horsey's head into the grill.  It was such a shock as there was no sound from the truck. It suddenly appeared right in the crosswalk apparently making a turn right heading uptown on Hudson, and stopped just in time.

In a phone call later with Jimmy the K, he too had a run in with a vehicle that refused to let him finish crossing at 11th near Bloomfield and drove right past him past a stop sign.

Earlier this year MSV attended a pedestrian safety meeting at City Hall where a woman told a story of being hit by a vehicle's mirror and knocked down, again up by 11th Street. The police came and refused to issue a ticket even though the driver admitted he was at fault.  The officer present standing in for Chief Falco was argumentative about the lack of a ticket issued and from what we heard, the police department later refused to do so.

APPLE STORE COMING TO HOBOKEN IN 2012? 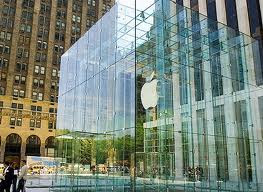 An ad on Craigslist looking for high end retail managers suggests there's an Apple Store in Hoboken's future.  The unverified ad claims an Apple Store will be opening by the middle of next year at the former location of Blockbuster, 412 Washington Street.

The Bokenonline earlier posted a story last August saying after a Halloween pop up store occupied the former Blockbuster space, a woman oriented chain Anthropologie would be following.  At the time of this writing, MSV did not have a chance to confirm details with the Bokenonline but would note it's far more accurate and reliable than Hoboken411 where facts aren't required in a story.

So is Apple really going to open one of its stores in Hoboken?  Hard to know but here's part of the ad on Craigslist:

Join us at the Apple Retail Store, 412 Washington Street Hoboken NJ, the unique gathering place where people come to discover Apple products. Show your passion and expertise as you connect customers with our products and help integrate products into their lives. Be a part of our team and change the way our customers work, play, create, and communicate.