With no approval letter from the NJ Department of Education as the other eight BoE trustees, Maureen Sullivan obtained an email approval mere minutes before tonight's board meeting rescinding her ineligibility.

Sullivan withheld the truth of her non-compliance from both the public and media even as it was in full force through all of today.  Yesterday Hoboken Patch claimed all Hoboken BoE members completed the criminal background check.  This wasn't the case as the approval only came this evening.


In a shocking development, a source relayed the NJ Department of Education confirms Maureen Sullivan has not completed the required background check.

It's not clear how the BoE will handle Maureen Sullivan's ineligibility at tonight's meeting.

The NJ Attorney General's office is reviewing the situation and may or may not alter a policy forcing BoE members who do not hold State approval letters to resign.

Grist for the Mill update: Apparently Maureen Sullivan's failure to act on numerous State notices through the second half of 2011 led her to no action whatsoever.

Sullivan is thought to have only fulfilled the fingerprinting portion of the application LAST FRIDAY!


Talking Ed Note: As MSV thought, deception was at work here and Hoboken Patch was taken for a ride.

Hoboken's nine member BoE is close to compliance with a State law passed last May adding a criminal background check for all its members - a statewide requirement meant to ensure a level playing field for anyone working in the education system.  Eight of the Hoboken BoE members confirmed satisfying the State law based on direct and secondary sources except for one: Hoboken BoE Trustee Maureen Sullivan.

The requirement passed unanimously by both the State Assembly and Senate was signed into law by Governor Chris Christie last May.  A number of communications during the year from the State urged statewide BoE trustees to comply with the backround check and the new law states anyone who doesn't would need to resign their position in 2012.


As of Sunday, a request via email to Maureen Sullivan inquiring on her compliance with the law yielded no response.  Efforts to confirm her meeting the State law is an open question with a BoE meeting set for tomorrow.

Hoboken BoE administration sources were reluctant to comment on any BoE member until the State officially released its report naming several hundred BoE trustees who failed over more than half a year ago to meet the criminal background requirement.

The State report showing hundreds of out of compliance trustees is expected to be available before the meeting Tuesday night.

One source close to Sullivan noted Friday they were unsure if any members of the BoE had fulfilled the state law but added a hope none of them did to stick it to Trenton.  The source described the added requirement after trustees being sworn in as ex post facto... unconstitutional.

The State has not put in place a process to remove BoE trustees statewide who have failed to satisfy the criminal background check but urged local boards to "police" the matter adding any trustee who votes who is not in compliance is subject to arrest and imprisonment.

Every district needed to review its board for compliance and ensure they met all the criteria to hold their trustee position under the state law last October.  Local Hoboken administrative sources were reluctant to discuss any findings but believed the final determination would be clear by Tuesday when the next BoE meeting is scheduled.

The criminal background process includes a fingerprint review.  Another final warning letter is believed to have gone out across the State of NJ urging any BoE trustee to fulfill the new law and complete an application.


Talking Ed Note: Please place your final selections at the betting window.  When the official report becomes available, MSV will do an update completing the question on the Hoboken BoE's compliance.

Another source said the State would likely allow reinstatement for the 300 plus trustees out of compliance based on the approval of the local BoE.  That like Maureen Sullivan's status is unconfirmed.

Related: Grafix Avenger spoke to an investigator at the NJ Board of Education who stated any late trustee applicants can sit in on the meeting but can't sit with their colleagues and vote.  She also confirmed that reinstatement comes with a vote by the other trustees.

Update: Hoboken Patch has just reported on the MSV exclusive confirming our exact details that eight of the nine Hoboken BoE members confirm they have satisfied the State law on criminal background checks.

Hoboken Patch also confirms Maureen Sullivan remains in hiding and has not communicated any action on the issue.

Update 2: Maureen Sullivan has stated she completed the background check application.  It's an open question when she did and if she holds a letter showing approval from the State required to take the dais at Tuesday night's BOE meeting.

Tomorrow we'll find out the details including trustee application dates.

Hoboken's annual budget battle is unofficially underway even with passage of its temporary budget based on a standard state formula at the last City Council meeting.  The bill for the reckless action by MORTe on the midtown garage also comes due and unfortunately and far worse, it's City workers who will be seeing layoffs as a result.

While Mason, Occhipinti, Russo and Terry Castellano are certain to not accept responsibility for costing the City millions on an easy refinance of the midtown garage, their sole reason for doing so was pure politics, the cynical and craven variety.  The refi would have seen the loan paid off at the same time as the original but save Hoboken millions and injected $50,000 too.

Councilman Michael Russo can give those workers an autographed copy of this video where he set them up for failure believing the mayor would not follow through after MORTE's reckless cynical action.

Once again, they'll discover they erred at the expense of the people they claim to represent.
Some people have some splain'in to do.  Cue the soundtrack of a shrill Councilwoman Castellano complaining about the talk of layoffs as she pretends not to know why.

A special meeting of the City Council will be held on Wednesday to discuss switching insurance brokers.  The action is anticipated to save Hoboken $48,000. 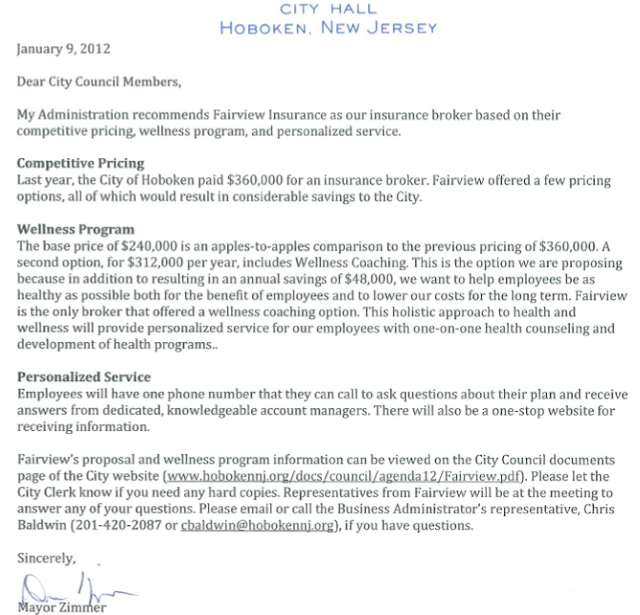 Talking Ed Note:  Last night, a report BoE trustee Maureen Sullivan "completed" an application for the state required criminal background check raised more questions than it answered.  Since the deadline to do so came over months in 2011 there's two questions surrounding the shadowy illumination on the claim.


Since all eight other Hoboken trustees were forthcoming with answers, there's little question they complied with the law.  Sullivan however emerged with an answer after a period of hiding and skepticism is rampant.

While some want to accept the matter is settled, only a letter showing a letter of approval from the State would suffice.  Today, a highly sought list on the hundreds of statewide BoE members who did not complete the background check in 2011 is hotly anticipated for release.

Tonight's BoE meeting as a result may be hotter than thought.