Mayor to give 2nd State of the City Address January 25th

Mayor Dawn Zimmer will be holding the second "State of the City" address Wednesday January 25th once again at DeBaun Auditorium at Stevens.


Things have been relatively quiet on the Bet Mazin front with not even a press release on the Hoboken St. Patrick's Day Parade so in the spirit of equal time because political operations at Hoboken411 just ain't working, MSV is reprinting the 2011 address from the Counte$$ as we await word from her newest consultants in 2012.


Bet Mazin submits her State of the City address

The following was submitted in advance of tonight's mayoral State of the City address on behalf of the Bet Mazin Hoboken Government-in-Exile campaign.

Although winter is ending and I'm still not mayor, things are beginning to look up.  Hoboken was off to a slow start after Christmas with a record blizzard.  We tried to milk it for what we could but our polling showed it isn't helping us.  Once again my minions at Mason411 have failed me.

Even worse, it looks like Zimmer will pull off another victory saving our hospital while removing it's $52 million bond from around the taxpayer's necks.  My ally Mikie Squared has and will continue to try to sabotage it if at all possible.  Still, after the $2 million in annual savings restructuring the police and expanding patrols, I tried to take all the credit but everyone ignored me.  Nevertheless, let's count that one as a win for me.  It's good for the morale of my dwindling minions.

The good news I deliver to you today is we have set a trap for Zimmer on the $25 million surplus!  I believe we can snag more of that in a one shot refund and get Mikie Squared and our crew re-elected taking credit for their hard work. Also to my great credit, I championed the updated pay-to-play ordinance while ensuring I can wheel money at will throughout Hoboken.  Due to my awesome City Council leadership, I snagged the pay-to-play sponsorship from Cunningham and inserted my own copy of the same self-sponsored ordinance at the top of the City Council agenda.  Even better, I can now fund all six ward council races and those four council members loyal to me.  It's great to be the Queen of Transparency.

With the $20 million waterfront repairs now identified, I'm proud to announce there's no way Zimmer can reduce taxes after the 5% last year.  My City Council will perform one shot tax relief from the surplus and convince the public it's permanent.  They won't know the difference and frankly they don't deserve to - after all if they did, I would be mayor today.

As mayor, I could have been on my way to NJ Senator and taking Menendez out.  I hate Zimmer for making me spend more on my plan, but soon, I'll be running all of Hoboken and then on to bigger and better things.

The people in Hoboken are so beneath me and I can keep my glory here for just a while longer.  They are lucky to have me, temporarily in the 2nd ward and in the city limits anyway.  Okay Hoboken, it's time for me to roll up my sleeves and get to the hard work of opening up 12 new checking accounts.  As you know, I have City Council ward elections to buy this May.  Stupid Zimmertinis crying about wheeling.  Too late, I funded the purchased votes for Tim Occhipinti by the hundreds in the 4th ward and now I have control vested in me by the Faulkner Act.  Best investment I ever made on myself and so much cheaper than dropping a million running for mayor.  If my former consultants/minions had only thought of it sooner.

But let us not cry over those of you who have failed me in the past.  Thank you Hoboken for your support as I move to retain my illicit control over the City Council and soon the mayor's office.  Please join me in undermining everything these Zimmertinis do and I promise you soon the old Hoboken government you know and love will be back to squandering and pillaging for the few, the proud and the entitled.

Church Tower pilots forever!  Develop or Die and in Wheely Mason We Trust!

With all my undying self-love,
Bet

For an inside view on Bet Mazin, please see the classic short film:

James B of Weehawken and Bet Mazin star in "Downfall of a wannabe shark"
by: smartyjones


Update: Hoboken411 posted a video of Mayor Zimmer testifying in a employee termination case.  While stating the mayor has perjured herself, the source of the video is most interesting.  Grafix Avenger has that story - and asks how did the Hudson Reporter land up in the same video watching pool as Beth Mason's smear merchant for her political operations, Perry Klaussen at Hoboken411? 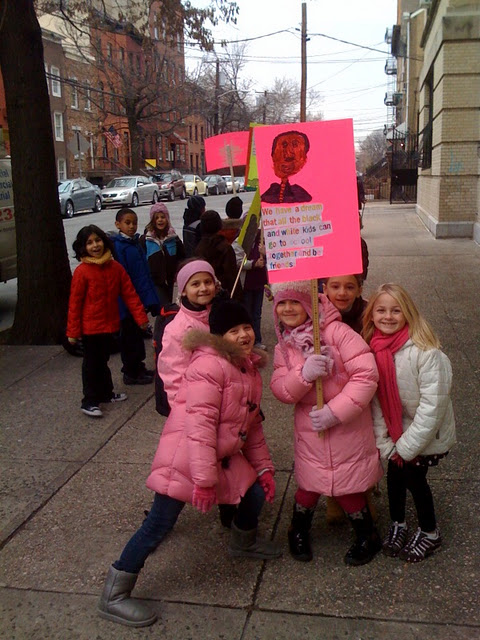 A favorite photo from the BankRobber celebrating MLK Day.

Wouldn't it be great if people could embrace others in the "content of their character" not judge them for race, creed, religion, job, income, or place of birth?

Hoboken and our nation could truly benefit from one of MLK's least remembered ideas.

Guest of the Stable Greg Bond: On St. Patrick's Day in Hoboken

On Friday, the Hoboken St. Patrick's Day Parade Committee released a letter canceling this year's parade. Nevertheless, at least one local bar and restaurant promoter is actively encouraging tens of thousands of non-residents to descend upon Hoboken for the traditional public urination and puke-fest known as Trash Hoboken Day.

Trash Hoboken Day has traditionally fallen on a weekend, the same day as Hoboken's St. Patrick's Day parade. But after last year's nationally publicized debacle, City Hall decided that the parade must be moved to a weekday. In their disingenuous letter to Hoboken residents, the Parade Committee made it clear that they would not consider holding the parade on any day other than Trash Hoboken Day. So they quit.

Rather than attempting to compete with NYC's massive St. Patrick's Day parade, Hoboken's celebration could distinguish itself by having a more local focus. The parade could feature the High School marching band, local step dancers, prominent members of the Irish community, and the police and fire departments marching alongside. Afterwards we could all raise a few pints at the local pubs and restaurants, attend an Irish play at a local playhouse, attend a reading of Irish literature, or attend a lecture on Hoboken's Irish history. Yes, it's a marked contrast to Trash Hoboken Day, but that's the idea. Why can't we celebrate Hoboken's Irish heritage without inviting tens of thousands of outsiders to vomit and urinate on our streets, throw beer bottles at pedestrians from roof tops, and assault our police officers and fire fighters?

I encourage all prominent members of Hoboken's Irish community to consider forming a new parade committee. A committee that believes celebrating Irish heritage needn't be equated with trashing Hoboken. A committee who believes that Hoboken can celebrate its Irish heritage, regardless of the day of the week.
Posted by SmartyJones at Monday, January 16, 2012
Guest of the Stable Greg Bond: On St. Patrick's Day in Hoboken
2012-01-16T09:04:00-05:00
SmartyJones
Comments