Boys & Girls Club problems emerge, this time with a whistleblower

The dam has finally broke on the treatment of minority, underprivileged children with an important breaking story by Amanda Staub on Hoboken, Patch.  The story produces a first hand witness, a basketball coach who comes out to discuss the unequal treatment of the children in the Boys & Girls Club in a building Hoboken taxpayers rent out for $2 a year.

The facility has seen the takeover of space by a Hoboken charter school, HoLa two years ago.  Additional construction has added on to the original building by a construction firm by Hola trustee Frank Raia, a violation of New Jersey law.  While Raia may not have saw any profit from the effort, the law explicitly states such practices are not permitted.

Questions on how a taxpayer building subsidized on behalf of the underserved residents of the fourth ward and handed over to a charter school with many politically connected parents remains an open issue.


Talking Ed Note: Councilman Tim Occhipinti "represents" the fourth ward but has been silent on this issue other than a misleading comment about the STY dance group exiled earlier.  One of his key backers in his elevation to the 4th ward council seat was developer and Hola Board Trustee Frank Raia.

At an earlier council meeting months back, he said the group was not moved out but ended its community activity at the Boys & Girls Club due to lack of funding.

For the record, the 4th ward dance group was banished before the funding ended.

Hoboken resident Scott Delea is a listed VP of the Boys and Girls Club.  He hasn't said a word on this either and there's no record he's filed any complaint unlike in the past when he called a press conference to make spurious charges during last May's council races.


Horse Sense: A tale of two cities, separate and unequal

Back in January, Da Horsey noted concerns were coming in on the marriage of the HoLa charter school and the Boys & Girls Club.  It was suggested local media perform their role of oversight and look into those concerns coming in but no such luck.


As the months went by, the whispers grew larger with stories of the neighborhood dance group being bounced out and other programs being scaled back in favor of HoLa's creeping influence on the facility.  Second hand reports quoted the HHA Director Carmelo Garcia saying the dance group had outgrown the facility.  He himself has personal interests in HoLa and the Boys & Girls Club as a sitting BoE member, HoLa parent and as Executive Director of the HHA, a true feat even by Hoboken standards - a triple conflict.

The Boys & Girls Club Boards are partly represented by Councilman Tim Occhipinti and frequent office seeker Scott Delea who has collected tens of thousands of dollars on behalf of the charity.  Both hold seats of influence in the organization but each are silent to the questions posed on the matter past and present.  Compromises for political expediency have been made and future ambitions are tied to the wallet of HoLa trustee Frank Raia who is believed undertaking the current construction expanding the Boys & Girls Club on behalf of HoLa.

No longer can the Boys and Girls Club ignore the voices rising from the community, the whispers from employees too afraid to speak on what has been transpiring and how a taxpayer subsidized facility was handed over to a third party like a Christmas gift in the first place.

While MSV supports charter schools, the odd happenstance of how one newly established one was handed the keys to an established taxpayer supported facility serving Hoboken's most needy children is a riveting question that must be exposed.

The City is reviewing the situation.  It probably should have been reviewed with more circumspection sooner.  With the taxpayers on the hook to some possibly very distasteful behavior, accountability is required.

Talking Ed Note:  Grafix Avenger spoke to one woman who recounted in tears the separate and unequal handling of meals in the facility.  If accurate, it's beyond disturbing.

Questions are being raised on whether or not some carbon monoxide emitting construction should be razed by Grafix Avenger concerning gaseous expulsions from the home of the Bajardi's on lower Park in Hoboken.

Similar to earlier questionable approvals by the former Hoboken construction official Al Arezzo, residents are wondering how a pipe emitting noxious gases and not of the repellant toxic kind on behalf of Councilwoman Beth Mason was approved a mere four feet from the window of another resident.

See below for the threat this presents in the exclusive photo provided by Grafix Avenger: 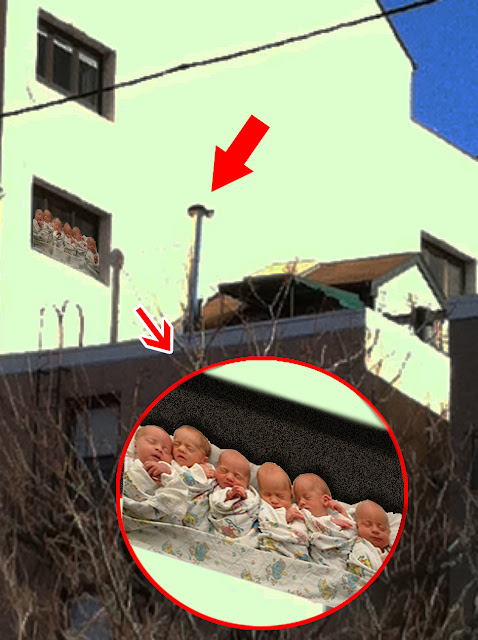 Last summer a protracted court battle led to another illegal addition on Castle Point by Louis Picardo being ordered razed by a judge.  That story broke on MSV last August.

Will we be seeing another questionable and dangerous construction being ordered removed?  See the original story "Code Problem" from Grafix Avenger yesterday:

Talking Ed Note: MSV is not able to confirm the status of the other two octuplets.  Are they the latest victims of their notorious and noxious neighbors?  Does this explain the odd singular public defense of the foul mouthed former Hoboken construction office official on Hoboken Patch?

Tune in to a Hoboken Construction Office complaint near you as there's more to come.
Posted by SmartyJones at Tuesday, January 31, 2012
More illegal Picardo type construction on lower Park?
2012-01-31T11:57:00-05:00
SmartyJones
Comments