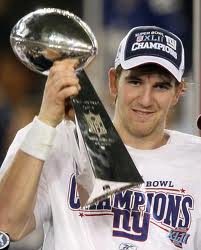 Hoboken's own Eli Manning was named the MVP of the Super Bowl leading the Giants to victory with another of his patented end of game comebacks.

Starting deep in Giants territory, Manning threw a ball down the left sideline to Mario Manningham into double coverage on a drive that put the Giants ahead to stay.  The 38 yard completion will become the stuff of legend and written forever into the Book of Eli.

Manning also outplayed the Patriot's Tom Brady and buried all speculation on whether he's an elite quarterback.

Talking Ed Note:  MSV is awaiting a Beth Mason press release claiming credit for the Giants victory and her demand to have her own float in the parade on Tuesday.  It would be on par to her claim of "saving" the hospital.

The City Council meeting not held last week due to Council members Peter Cunningham and Carol Marsh leaving in protest upon discovering Tim Occhipinti's resolution on the BoE elections will take place this Wednesday.

The concerns by the two Reform members wasn't strictly the BoE resolution.  Grafix Avenger correctly noted there were additional concerns on what additional power grabs might be in store, especially on Zoning Board appointments.

The Zoning Board will have three seats up and development in Hoboken is always a matter for debate in town.  The council minority would likely choose members who would be favorable to developers while the Reform majority would be more protective of the town's existing character.

Councilwoman Jen Giattino is back from Indianapolis where she worked with the NFL and city officials there to help develop business opportunities for Hoboken.  Two city employees also made the trip on behalf of Hoboken business but the councilwoman paid all her own costs.  None of the three actually attended the game as the false information in Councilwoman Beth Mason's ad last weekend said. 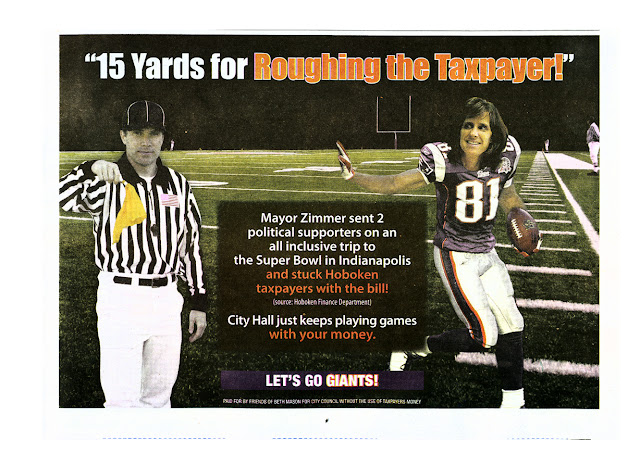 While the City Council was informed in an invitation by Giattino, she went on the business development trip alone.  After the postponement of the meeting last week, word leaked out from MORTe they wish to politicize the matter.

How many millions in business could be coming to Hoboken with the 2014 Superbowl?  It's too early to say but MSV will note the W Hotel is already completely booked that week.

As in any business opportunity, it's the execution that determines the outcome.  Councilwoman Jen Giattino is exercising just that with the NFL.  Hoboken's Chamber of Commerce currently headed by former Hoboken resident Mike Novak has been notably absent on this.

Related: The Hudson Reporter has an exclusive story on the financial windfall coming to northern New Jersey in the form of the Super Bowl.  The NFL likes to reward cities that build new stadiums and Met Stadium in the Meadowlands is new but has no roof.  This will likely be its first and last Super Bowl.