Pearson will maintain a New Jersey workforce of 1,750 with the completion of the 500,000-square-foot, state-of-the-art, sustainable office and retail building 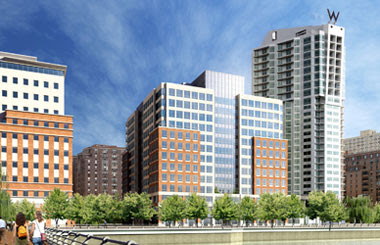 “Pearson’s decision to stay is just one of many examples where we’ve successfully intervened to keep and create jobs in New Jersey,” said Lt. Gov. Guadagno.  “The Christie-Guadagno Administration’s policy of assertively protecting and pursing jobs for New Jerseyans is a major reason why the New Jersey Comeback is underway.”

Pearson will occupy five floors starting in 2014 and is relocating approximately 900 employees from its current offices in Upper Saddle River and Old Tappan, N.J.

“Pearson and New Jersey share a deep commitment to attracting and retaining a talented professional workforce that will flourish in the vibrant and stimulating center for media, education, and digital services that has emerged within the excellent mass transit central location of Hoboken and the Waterfront Corporate Center,” stated Glicini. “Toward this goal, we are relocating 900 employees from our Upper Saddle River and Old Tappan locations, to 225 River Street, a LEED-certified building. Leveraging the natural light in this beautiful space means less artificial light usage during the day, thus reducing energy consumption.  Heating and air conditioning systems in the new location will be more efficient as a result of new innovations, technology and equipment.”

Added Glicini, “We extend our gratitude to the Governor and Lt. Governor for the State’s investment, as well as the support of the New York and New Jersey Port Authority, in our choice of this Hoboken location. Together along with our partner, SJP Properties, we are creating a green and affordable waterfront home for our world-class workforce and investing in the technology essential to Pearson’s mission to foster learning and achievement around the globe.”

“We are very excited to welcome Pearson and 900 of their employees to the Hoboken community,” said Mayor Dawn Zimmer. “This is exactly the kind of green, smart development that Hoboken needs to support the continued economic growth of our local economy without burdening our infrastructure. World-class companies like Pearson want to do business in Hoboken for the same reasons we all love to live here: we’re a bustling, walkable city with easy access to mass transit and New York City, a lively arts and music scene, packed sidewalk cafés, a vibrant nightlife, unique shops, and beautiful waterfront parks.”

The 14-story office building is designed as New Jersey’s only waterfront LEED Silver Certified office development and incorporates numerous modern features, including floor-to-ceiling glass windows that permit natural light to penetrate deep into the floors. Construction is scheduled to commence in fall of 2012 and will be completed in summer of 2014. The development will create more than 600 construction jobs.

“Waterfront Corporate Center III will be developed to incorporate the most advanced green technology and state-of-the-art features among any new commercial development in the region, providing Pearson with a high-performance work environment to support its business operations,” stated Pozycki. "Hoboken affords all of the amenities that today’s modern corporations demand in order to attract and retain talent and maintain their competitive edge, from unparalleled access to multiple transportation modes, to an abundance of shopping, dining and entertainment opportunities.”

The Waterfront Corporate Center office complex is located next to the W Hotel and is within steps of the Hoboken Terminal, which offers NJ Transit trains and buses, PATH service, light rail and water ferries to New York City, and is within a few minutes drive to both the Holland and Lincoln Tunnels.

As part of the development, SJP is constructing a 200-car underground garage for direct covered access parking, and tenants will be afforded access to a fitness center in the adjacent Waterfront Corporate Center II, among other amenities.

Designed by HLW International architects, the building has unparalleled New York City and Hudson River views, and features flexible, highly efficient floor plates. Of the additional space, 25,000 square feet has been allocated for retail use; SJP is currently marketing the remaining availabilities.

First constructed in 2000, Waterfront Corporate Center has become Hoboken’s most successful mixed-use development. The complex is currently comprised of more than one million square feet of world-class space, which is home to such leading, high-caliber corporations as John Wiley & Sons, Marsh and McLennan, Sumitomo Trust and Banking, Mizuho Securities, Thomson Reuters and Octapharma.

Hoboken’s waterfront is further enhanced by the Port Authority’s investment of more than $80 million in infrastructure improvements along the river, evidenced by two piers that have been converted into beautiful, water-surrounded recreational parks and a tree-lined boulevard. The five-acre park at Pier A includes an open lawn area, fountain, tree grove, pavilion and amphitheater space for tenant use. The two-and-a-half acre park at Pier C features a playground as well as a promenade at its eastern edge with lawn areas and a fishing pier.

About Pearson
Pearson is the world’s leading learning company. Its major businesses are: Pearson, the global leader in education, providing print and digital learning materials and services used by millions of students of all ages every year; The Financial Times Group, which has an international network of business and financial newspapers and online services that are read by millions of business executives and investors every day; and Penguin Group, which is one of the pre-eminent names in consumer publishing, with an unrivalled range of fiction and non-fiction, bestsellers, and classic titles. Through its books, newspapers and online products and services, Pearson helps people of all ages to live and learn. See www.pearson.com.

About SJP Properties
SJP Properties is a fully integrated commercial and residential real estate developer, investor, asset manager, construction manager and property manager. The expertise of the company’s core in-house team of professionals encompasses the entire development process, from site selection through coordination of tenant move-in for large multi-phase office complexes and build-to-suit corporate headquarters properties, as well as for individual tenant build-out projects. For 30 years, SJP has sustained an unblemished track record of success having completed every project on time and within budget, and has developed strong relationships with some of the industry’s foremost investors and lenders.

Councilwoman Jen Giattino: "Hoboken is on the radar for 2014 Superbowl opportunities"

The Giants will have their parade today, the crowds will be cheering but in Hoboken tomorrow's City Council meeting is where the battle may begin over potential Hoboken business and the City's efforts to date for a slice of $500 million in anticipated business for the Super Bowl in 2014 scheduled for Metlife Stadium in NJ. 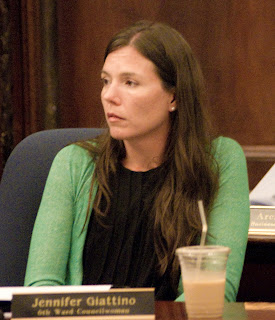 Councilwoman Jen Giattino who returned from a trip to Indianapolis Sunday morning discussed the contacts made that will be essential for Hoboken to get a slice of the $500 million pie.  "There are things that Hoboken can do.  If we didn't go, Hoboken wouldn't be on their (the NFL's) radar, but now we are," the councilwoman said highlighting discussions with the NFL host committee and network partners (TV) to host events in Hoboken.

"I wanted to look at what would work and what wouldn't work in Hoboken.  The NFL Village is something that can absolutely be done in Hoboken.  The ESPN set is also another opportunity with Hoboken as the host.  I spoke to them about why Hoboken would be a great backdrop for this."

The Councilwoman paid for all her expenses while advocating in advance why the City should pick up the cost for two city employees.  She referenced efforts with her City Council colleagues two weeks ago and preferred some of them go and she would provide the NFL and related contacts.  The councilwoman has three young boys at home.

After the cancellation of last Wednesday's Council meeting, Hoboken Patch posted a report that evening MORTe planned questions for the people involved in City government who went to Indianapolis and released unconfirmed information from a City employee on the airfare of the Parking Utility's Ryan Sharpe for $339.20.  That followed with a Councilwoman Beth Mason attack ad over the weekend claiming the City sent "two supporters" to the Superbowl at taxpayers expense.

Sharpe was joined by Director Leo Pellegrini along with Councilwoman Jen Giattino to further ties with contacts developed with the NFL after the 9-11 ceremony at Pier A Park. None of the three attended the game on Sunday nor was it in the plans.

"I spoke to Councilmen Michael Russo and Tim Occhipinti why this was an important business opportunity for Hoboken."  She added no one in the end agreed to take her up on the invitation and there was no disagreement that city employees should pay their own costs adding, "I emailed the entire City Council two weeks prior to the trip, and no one responded with any questions or comments."

Councilwoman Jen Giattino added there were two street concerts in Indy with the first hosting 100,000 people sponsored by Pepsi and would present another business opportunity for the town.

Councilwoman Beth Mason continued with her latest attack in a release yesterday saying, "The latest example of pork barrel spending is taxpayers footing the bill for members of the Zimmer administration to take a trip to the Super Bowl in Indianapolis this week."