Be my friend, Godfather?

Another corruption scam this one likely retired for now has come to light with an unusual story in the Hudson Reporter of all places.

The final gift to Hoboken from Ray Smith who moved on to PolitickerNJ this week, comes in the form of a scam where the grift presents itself demonstrating certain municipal employees were more equal than others.

If someone "protected" found themselves in trouble for not doing their job, a Godfather could step in and squash their problems.  Ray Smith described it thusly in an interview with Director Ian Sacs:

“If you were protected by a Godfather [a powerful person in Hoboken],” Sacs said last week, “and you weren’t doing your job, and somebody took you to task about it through a disciplinary civil service procedure, that individual could provide information to his or her Godfather. A representative of a Godfather would contact a superior and basically say, ‘Hey, what the hell are you doing? Leave this person alone.’ ”

Under Director Sacs the corrupt practice of having a Godfather protect you from doing your job went down the tubes and is just another reason explaining the rampant abuse he's faced in the Hoboken City Council at the hands of Councilman Mike Russo.

Sacs stepped in as Director and has replaced some notorious figures in the position before him including John Corea who will be sentenced in April for his role in a $1,000,000 quarters swindle of Hoboken Parking meters and Michele "five-dollars-a-tow" Russo.

Who did John Corea kick up to pay tribute? Who was his Godfather/Godmother?

Just another day in the land of the Soprano State, Hoboken way.  You can't make up this kind of systematic corruption.  It explains much and although MSV can't say with certainty, we have a feeling there's a folder rife with similar stories in the mayor's office; a folder she will never make public.  To do so would likely be considered divisive.

The truth of corruption in Hoboken is far stranger than fiction.  You know it absolutely doesn't end here and explains how the rampant looting of communications coming and going inside the mayor's office would be viewed simply as business as usual.

The FBI arrested one Michael Russo pal, IT manager Patrick Ricciardi last November in a post election surrender.  It should be the first of several acts.  Showtime! 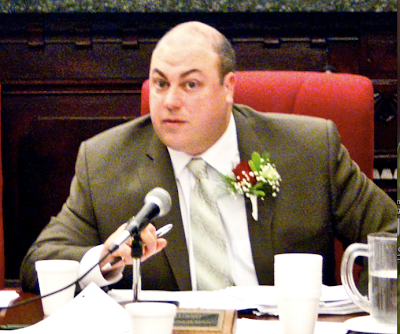 Mikie, be my Godfather?

Talking Ed Note: The late Judy Tripodi did a lengthy interview with MSV and as soon as the tape recorder stopped and the public information officer left the room, she began adding light on corruption she didn't want to discuss on the record.  One of her stories was about the rampant abuse of municipal workers disappearing, often to local bars and not returning to work that day.

Was this a corrupt godfathering activity too?  (Tripodi countered the practice by instituting electronic time cards plugging at least one hole.)

The question of how many godfathers there's been in Hoboken is an open question and not one MSV can readily answer.  Perhaps some people on the other end of the system doing more than their fair share of the work would like to swap those stories?  Your identity will be held in complete confidence.

When the Old Guard talks about transparency, this is another of their little inside jokes mocking the Hoboken taxpayers.  Next time you hear them moving large amounts of hot air on behalf of the taxpayer, think about this story and you'll have a truer context.

A closer parallel is from the short clip below.  What the Russo clan would call the good old days, ones they wish to resurrect.