Many of you inquired on the above subject program.  This new law has created up to 850 additional parking spaces located at our intersections throughout Hoboken.  I sponsored the new legislation, worked very closely with the Administration to have the legislation written, worked with the subcommittee to fine tune it, and off to the council to get it passed.  It took approximately four months to get this done.

Here's how it works (as simply as I can without a visual - check out city website link below).  From the hours of 7pm to 7am (overnight parking), an additional parking spot becomes available on the outbound segments at each intersection.  Prior to this change, the state mandated no parking at each corner, at no less than 25 feet from the crosswalk (50 feet when a stop sign's present).  Now we have a 15 foot minimum at the outbound segments of each intersection during the times noted above.

The Parking Utility is working on identifying the 15 foot spot with a red hash mark.

This will provide some relief to the neighborhood with an overnight option.  However, it will be important that we stay outside the 15 foot minimum to keep corners clear as well as provide for our emergency vehicles to navigate the corners.  This parking flexibility is a delicate balance between convenience and public safety.

Thanks and please pass along.  Peter 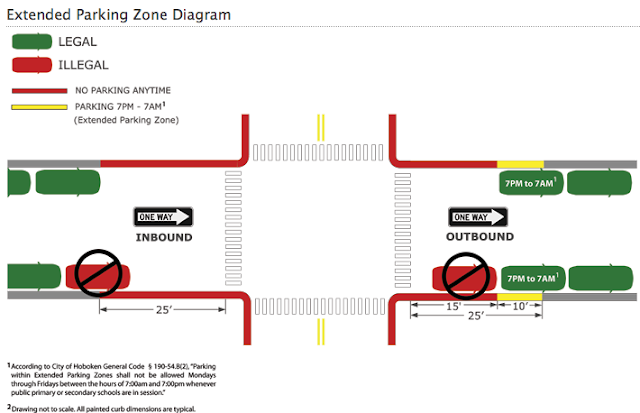 Horse Sense: Let the People be heard in City Council

Engaging the wider public is always a challenging issue in Hoboken elections.  The recent move to November BoE elections puts Hoboken in the same framework as almost 87% of the State and will see more people using the direct vote at the polls later this year but what of their literal voice?

When MORTe made its notorious midnight power grab to hand the council chair to Beth Mason, the public had no notice and no means to speak on the matter at a reasonable time.  For several meetings thereafter, a member of the public would need to sign up and wait for hours and hours - well past midnight for an opportunity to speak on the matter of the most egregious action we've witnessed in person.  No one did but the outrage was there.

It was a cynical, craven act by MORTe but showed their true colors, transparency of any minimal variety be damned.

Currently, the City Council public portion structure allows members of the public to speak on the subject of individual resolutions and ordinances for five minutes.  But if someone has an issue not part of the council agenda, they must sign up on the list and then wait four, five possibly six plus hours until public portion comes up at the end of the evening when any topic may be discussed.

This is simply unseemly to engage the public over hours and allow them to speak directly to both their elected representatives and other members of the public in the dead of night at midnight or even later on a matter they deem important.

MSV proposes City Council meetings begin with public portion for several reasons.  First, if there is a resolution or ordinance under consideration they can speak to the matter in detail and don't need to spend hours on end until that specific resolution comes up.

Second, the speaking rules as they exist now don't encourage public participation; they discourage it.  This needs to be changed so a broader part of the public can express themselves for the good, status quo or what have you.

Third, while the current system permits public speaking, it acts as a closed system.  As it stands, the City Council meetings are more akin to public meetings with occasional input from the public.  It would be far better for all members to hear from the broadest voices of the public early in the evening not when they are most eager to leave chambers and call it a night.

For all these reasons, the antiquated system for public speaking badly requires updating.  Call this horse sense editorial the 3-3-3 plan.  Let's give the public an opportunity to speak on any topic in public portion for three minutes to start, three minutes on an issue for a resolution and ordinance and three minutes to close if they make it to the end of the typically long evenings.

If time is a concern, this can be altered to give members the opportunity to speak on limited resolutions ensuring the broadest group of people are heard, not the people who wish to speak most often.

The door to hear the public petition their representatives needs to be opened and those doors should be welcoming long before midnight strikes.

Talking Ed Note: Council members will no doubt be concerned meetings may be stacked with staged political operations at the start of meetings.  That's part of the burden of elected officials to suffer through as no doubt, there will be occasion when this will occur.

The public as it stands now suffers through any number of meaningless discussions in the council on non-binding, purely political resolutions or worse with pure unadulterated and often contradictory grandstanding.

Allowing the public to speak first sets a different tone and may act to minimize some of the worst behavior witnessed on the council.  Updating the structure of when the public interacts with the council will allow the broadest public voices to be heard.