Look out Hoboken: The Old Guard welcomes back Peter Cammarano

Ex-mayor and convicted felon Peter Cammarano is on the loose as of 12:00 midnight, officially being released from a half-way house facility in Brooklyn.

According to a source at the Brooklyn based Community Corrections Office, Cammarano was scheduled for release on Sunday the 11th but is eligible for release at midnight tonight.  As part of the work release program at the facility, thought to be at 100 29th Street in Brooklyn, Cammarano has seen regular weekend time offsite and was exclusively reported by MSV seen in Hoboken on a Sunday back in late October.

Although separated from his wife and daughter, Cammarano has reportedly maintained his upper Bloomfield St. brownstone and his rumored goomah, a woman believed he was involved with before his separation has lived in the residence since before his imprisonment.  One source said she describes herself as his girlfriend.

Many members of the Old Guard have close connections to the ex-mayor and felon including Councilman Michael Russo, who had Cammarano act as his campaign manager in his earlier Council run back in 2007.  Politico Perry Belfiore was one of the linchpins to the Cammarano mayoral run in early spring 2009 along with the late Maurice Fitzgibbons.

Many of the hardcore backers of Cammarano didn't miss a beat after his arrest, resignation and imprisonment moving on to campaign and install Tim Occhipinti into the 4th ward council seat including Democratic Chairman Jaimie Cryan, recently deceased Maurice Fitzgibbons, Paul Lichstein and  Beth Mason political operative Lane Bajardi.

Cammarano was caught on FBI surveillance tape accepting $25,000 in return for controlling the Hoboken Zoning Board to benefit would be developer, FBI informant Solomon Dwek.

In another meeting around the same time, Councilman Michael Russo met with Dwek and other Jersey City officials and agreed to a series of payments.  He instructed the first payment should be made out to "Russo for Hoboken."  He claims he never accepted any money later from Dwek and there has been no prosecution.


Talking Ed Note: Will there be an Old Guard party for Cammarano as there was when the last ex-mayor and felon Anthony Russo was released?  Tough to say as Russo did not appear to get a shortened sentence while Cammarano's mandatory two year sentence has been cut from the scheduled fall release to the spring.

Cammarano's sentence was reduced before he served one year, the time period required before any reductions are typically considered. 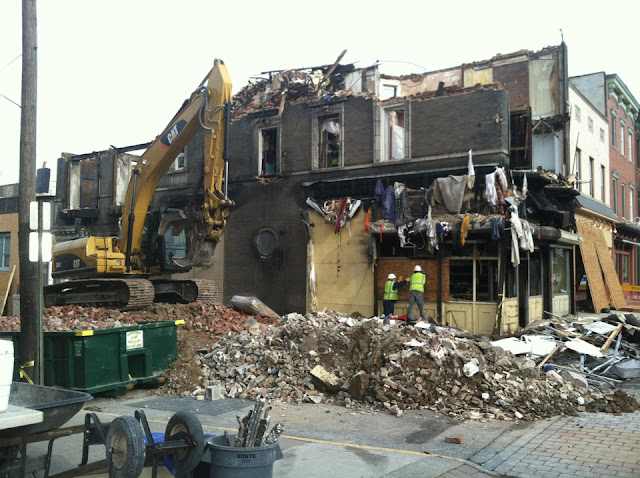 
this city, block by block.
rooms cut in half
hang like flayed carcasses,
their old roses in rags,
famous streets have forgotten
where they were going. only
a fact could be so dreamlike.
they're tearing down the houses
we met and lived in
soon our two bodies will be all
left standing from that era."
-
Excerpted from Adrienne Rich's
"Like this together"

Talking Ed Note: This picture and excerpt comes courtesy of p1ywood.  It's hard not to feel some sadness and loss with 300 Washington disappearing.  It was a beautiful structure with Hoboken history.
Posted by SmartyJones at Friday, March 09, 2012
300 Washington Street is going, going...
2012-03-09T12:36:00-05:00
SmartyJones
Comments

At the City Council Wednesday night, a discussion on the emergency appropriation saw comment by the Corporation Counsel that evening Melissa Longo.  She explained why MORTe's attempt in the meeting to present limited funding for the City's operations while the annual budget is under consideration is "arbitrary and capricious."

While she's explaining the foolhardiness of selectively choosing to make payments to one segment of public safety while ignoring paying City employee medical insurance, trash pickup and other related city services, attempts to interrupt her thoughts are fended off.

Tim Occhipinti and Michael Russo repeatedly attempt to curtail logic from getting out.

Talking Ed Note: The battle being waged in the short term emergency appropriation is cast correctly by the Corporation Counsel.  The Executive branch of Hoboken government is operating in its interest to continue funding the City's operations until the budget workshops and process is completed.

MORTe is acting to undermine the City, to create crisis and damage the interests of the government's functions including defending the city in dozens of ongoing legal cases such as the Monarch Project but in this case limit the damage among select public safety employees.

It's completely accurate for the Corporation Counsel to call it what it is: "arbitrary and capricious."

For Beth Mason, Tim Occhipinti, Michael Russo, and Terry Castellano re: MORTe, it's business as usual.  Having earlier attempted to close the hospital and bankrupt Hoboken, this merely whets their appetite.

Related: Grafix Avenger offers some insight and background on another part of the meeting where a resolution honoring Sunshine week is offered up by Councilwoman Beth Mason after midnight with no public notice.  In the midst of an uproar over the "sunshine" in such a move, Mason barks out "release the emails."

Those "emails" clearly referenced are the tens of thousands looted communications in and out of the mayor's office under investigation from the FBI.  Mason is signaling her desire to see those emails made public so they will be rendered useless in the federal government's investigation on the massive Data Theft Conspiracy.

Wonder why?  More on that to come.  Much more.