In a stunning reversal of fortune to the logjam in the City Council over an emergency appropriation, a little known rule with the Department of Community Affairs extending the deadline for a budget permits temporary appropriations.  In Hoboken's case, it means 750K to be reconsidered under the budget rules.

Previous to that action, six votes were required for an emergency appropriation.  In four separate votes on three different occasions, the sixth vote was withheld among MORTe: Beth Mason, Tim Occhipinti, Michael Russo and Terry Castellano.

Mayor Dawn Zimmer has notified the City Council there will be a special meeting this Saturday at noon to weigh the matter and under the rules of a temporary budget, five votes are needed not six as in a super majority.

The action by the State means another sabotage of Hoboken by MORTe is all but over if the five members of the council majority show up and vote as they have earlier to approve the measure.

Included in the $750,000 appropriation is pay for firefighters, special equipment for their protection and the leveling of the site of the lower Jackson Street fire on first street.

Last night Councilwoman Terry Castellano complained a Saturday meeting interfered with her store City Discount and Tim Occhipinti complained about holding a budget hearing on the day of a cultural event - the real St. Patrick's Day.

Each time MORTe voted down the emergency appropriation, they failed to say what benefit the City gains by doing so.  The delay in approving the funds jeopardized a number of city services requiring funding before any passage of the 2012 budget and put legal cases numbering in the dozens on hiatus with no payment for services rendered by numerous legal firms retained.

The letter from Mayor Dawn Zimmer to the City Council follows: 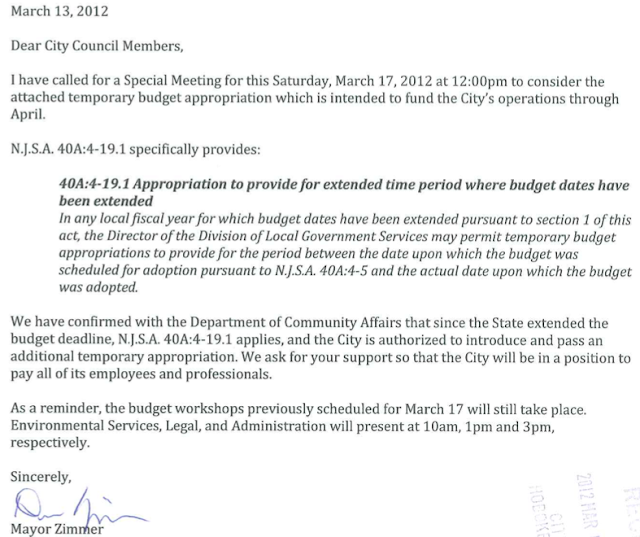 A second letter issued to Hoboken411's Perry Klaussen, Councilwoman Beth Mason and Lane Bajardi at the end of February from former Councilman Michael Lenz notes the complete silence of the Mason troika and inadequacy of their failure to respond.

Grafix Avenger notes of the certified letters sent, only Beth Mason signed for the first.


Talking Ed Note: MSV will be back but for the moment let's give the Mason Media Complex some time.
Who said there isn't a Hoboken media sequel to "Silence of the Lambs?"