The City Council presented with some outstanding bills for vendors unprocessed required six votes for normal course of business payments.  Six votes, typical, paying bills, normal? Yes, normal for over five-hundred municipalities in the State of New Jersey except for Hoboken.

Why?  Well any financial budget item requiring more than five votes is an opportunity for sabotaging the City and MORTe NEVER misses that opportunity to do harm.  In this case, it's not the taxpayers who bear the brunt of their scorn, but the professionals such as the Corporation Counsel and his law firm with a bill in the range of $200,000.

Corporation Counsel Mark Tabakin noted in advance of the discussion how line items are typically moved everywhere in New Jersey except for Hoboken foreshadowing the "typical" action by the Council of No: beth Mason, tim Occhipinti, michael Russo and Terry Castellan re: MORTe.

MORTe is the Italian word for death.

Whether it's a simple refinance saving four million, saving the hospital in a sale or simple budget line transfers, MORTe is consistent in making Hoboken pay the largest price for political gain.

Talking Ed Note: Councilman Michael Russo made sure to signal the budget line items would again be blocked out of the gate and asked for an investigation why the Business Administrator had not processed the bills sooner.  Tim Occhipinti echoed a call for an investigation instantly.

Former councilman Michael Lenz was appointed to an unpaid position for the rent leveling board 6-3.  Tim Occhipinti complained he didn't know the composition of the current board on a breakdown of owners and renters.

Why doesn't Tim Occhipinti do his job and find out BEFORE the meeting?

MORTe voted against bonding for the Hop, sidewalk improvements, and parking utility vehicles on first reading.  Typical MORTe sabotage foreshadowed ahead on next reading when the public can be heard.

A chance to help Hoboken with a sixth vote?  "NO" gets them very excited.

Russo withdrew resolution #2 to give a bill to Marsh and Cunningham for their protest walkout last month for the next meeting.  No resolution has been presented to the public.

Tonight another round of the Hoboken City Council follies is on tap with some comedic humor; the usual pure politics brought to bear by Councilman Michael Russo in resolution #2 where MORTe looks to present a bill for the protest walkout of council members Carol Marsh and Peter Cunningham.

There's still no actual resolution just hours before the meeting.  This is the type of transparency Hoboken government observers are use to from the Beth Russo hydra.

Does anything need to be said about the irony of this coming from the public face of the Russo clan who have made looting the Hoboken taxpayers as only his family has in recent and past years the family business?

Since it's early on the agenda, people should swing by if for nothing more than to boo the clownish antics of Russo and the chutzpah he almost always has on display.

Other more relevant, important items include bonding for expanding the HOP buses, maxed out with increased readership at an all time high but limited by antiquated equipment in frequent repairs.

There's more than five million in other bonding for capital improvements toward streets and parking utility vehicles.  Should make for more hollow bickering about how capital improvements should be paid out in the most inefficient municipal accounting manner out of the annual budget.

One of MORTe's favorite tactics is to starve the City of long term capital improvements insisting they should be paid out in one fell swoop.  It makes no sense at all by any accounting standards - not the first time they said it, the last or if again tonight.

It's all about hurting the City, preventing tax reduction and sabotaging Hoboken (and the mayor) whenever possible.

These are the people after all who refused to approve a simple refinance of the midtown garage putting $50,000 into the City's coffers and saving $4 million in one fell swoop last November.
Posted by SmartyJones at Wednesday, March 21, 2012
Russo chutzpah, improved HOP buses on tap @ 7:00 tonight
2012-03-21T15:37:00-04:00
SmartyJones
Comments

Assemblyman Ramos on the 2nd Anniversary of the Affordable Care Act

From the desk of Assemblyman Ruben Ramos:

In 1999, I was diagnosed with Stage 2B Non-Hodgkin’s Lymphoma. Thankfully, I was able to navigate the system and am in my eleventh year of remission. Unfortunately, millions of Americans are not as lucky. The federal government spends an extraordinary amount of money on healthcare. Individuals and families were often left without coverage due to “pre-existing conditions,” administrative errors, and clauses that allowed companies to suddenly discontinue coverage. The system was broken.

In 2010, the federal government finally took action to solve this growing crisis. On March 23, America will mark the second anniversary of the signing of the Patient Protection and Affordable Care Act into law. The protections established in this law represent the fundamental obligation of our government to ensure fair treatment of all of its citizens. For too long, corporate healthcare profits have outweighed the medical needs of those they covered, and the Affordable Care Act has already started to resolve these problems.

In 2000, I delivered a keynote speech at the Democratic National Convention that addressed our country’s dire need for healthcare reform. While I acknowledge some criticisms of the Affordable Care Act, a reform of this scope represents one of the single most important advances in healthcare reform in fifty years. The provisions enacted through this law will create an environment that expands accessibility to healthcare, provides basic patient protections, and penalizes abusive corporate practices.

Since its enactment, the Affordable Care Act has already expanded and enhanced coverage for millions of Americans; just last year the ACA restored coverage to nearly 800 New Jersey residents who had been dropped due to pre-existing conditions. The days of dropping coverage for the terminally ill and denying coverage to individuals with pre-existing conditions are behind us. Greater shares of premiums will be reinvested into providing better care instead of corporate bonuses and lobbying efforts. These measures are helping us fulfill our moral duty to help our fellow citizens when they are most in need.

Over the next two years, as more provisions of the Affordable Care Act go into effect, the reforms will benefit each American in a variety of ways. There will be a reduction in overall out-of-pocket healthcare costs to individuals, and new bans on lifetime dollar limits on benefits - freeing cancer patients and survivors like myself from having to worry about rationing health care. At least 3 million individuals have already been freed of lifetime limits on their health care. Fewer patients will need to rely on emergency rooms for primary care and millions of previously uninsured citizens will gain access to comprehensive and affordable care via a benefits exchange.

In fact, I am proud to have joined my colleagues as a primary sponsor of Assembly Bill 1081, New Jersey’s Health Benefit Exchange Act, which will allow individuals, families and small employers to browse and purchase coverage plans that best suits their own individual health needs. It is critically important that state and local government bolster and enhance the federal government’s efforts to reform our healthcare system.

The ability of every citizen to see a doctor, receive quality treatment, and overcome illnesses are fundamental American rights. The Patient Protection and Affordable Care Act is designed to ensure that these rights are preserved for us and for all future generations of Americans.

Sign of the Times: Parting is such sweet sorrow

Was it over a month ago since the Valentine's meeting of the BoE where this shot of Councilwoman Beth Mason and political operative Matt Calicchio in her employ was taken?

It is but the echoes of that meeting live on and not solely in the misinformation from MORTe in the City Council where every aspect of their argument has been outright wrong or simply false information.

Tonight's Council meeting will feature Resolution Number 2: a Michael Russo concoction seeking to charge Council members Carol Marsh and Peter Cunningham for leaving an earlier council meeting last month.  This was in protest at the risk of a one day MORTe majority adding less than weak Hoboken Zoning Board members like Michael DeFusco who MSV heard made a hollow speech bereft of legal facts on behalf of a developer who has broken numerous rules in a bar construction on lower Jackson Street.

A few more like him and this town will see money changing hands in dark rooms behind closed doors with public proclamations on how they are providing great benefits to our neighborhoods as they sell us out, block by block, story by story until Hoboken is no longer even recognizable. DeFusco was the Hoboken Zoning Board member appointed under the unfortunate but short lived Beth Russo hydra.

Hoboken can not afford to see those days ever again.
Hasn't this town had enough of the Hoboken Sopranos?

Don’t miss this opportunity to welcome spring.  Kick up your heels to the tunes of “Swingadelic” at this important charitable event to benefit the Hoboken-North Hudson YMCA.  The bountiful buffet will be outstanding, including vegetarian items and choices for those observing Lent as well as a signature white sangria cocktail created for this occasion. www.libertyhouserestaurant.com

Tickets are still $ 150.00 (61.36) tax deductible). Take advantage of this lower price and purchase your tickets before midnight on Wednesday when the price will rise to $ 175.00. www.brownpapertickets.com/event/224671

Parking will be validated and our event is wheelchair accessible. 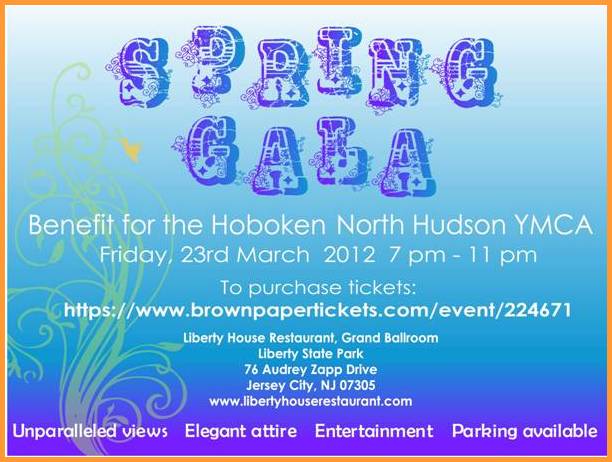