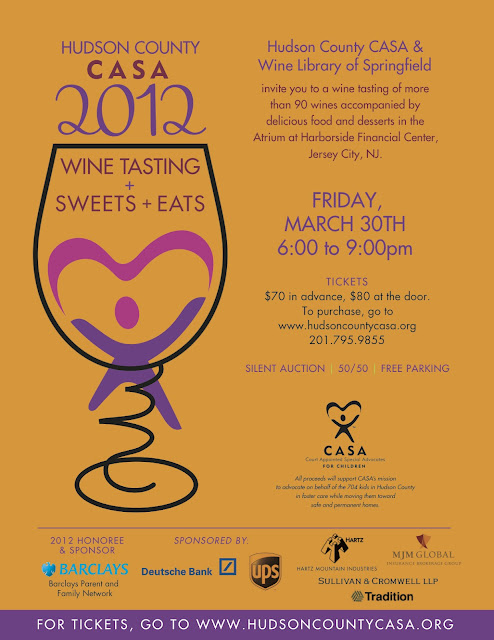 Each year it is a pleasure to support an organization in Hudson County that does so much to help children in challenging situations.

The organization is Hudson County CASA.  These children are in and out of foster care, yearning for a stable and supportive family environment.  Their champion is a volunteer officially sworn in and designated as a Court Appointed Special Advocate.  This is a very tough job when you have many children in and around Hudson County needing assistance with limited resources.

To support this hard working organization, I am advocating, as I have in the past, for your attendance at their 6th Annual wine tasting and "sweets and eats" to benefit Hudson County CASA.  It will be held Friday, March 30th from 6 to 9 p.m. at The Atrium in the Harborside Financial Center in Jersey City.  Wine will be provided by Wine Library of Springfield and special treats from Cibelli chocolates http://www.cibellichocolates.com/ and desserts from M-Squared http://www.msquarednyc.com/.

Other highlights of the evening will include hand rolled cigars from Hoboken Cigar, great hors d'oeuvres, 50/50 raffle, and many other fabulous items at auction.  Tickets are $70 per person and can be purchased at www.hudsoncountycasa.org.

We hope to see you there!!

Tim Occhipinti taking credit for the work of others - Episode IX

The unfortunate part of Hoboken's transition to a professional Reform minded government is the vestiges of Tammany Hall politics played out over decades.  The formula is usually the same, rewarding winners and punishing losers.  In government, competence is often the first victim.

There are of course other victims as when cheap low brow politics flaunts itself taking credit for the work of others.  In that aspect, Tim Occhipinti has mastered the cartoonish art form of the cheap politician or in Hudson County the typical hack.

One little known story as it's not been written involved plans drawn up by the mayor's Administration for this very park in the fourth ward.  During the meeting, members of the public had questions and discussed plans for the new equipment.  Occhipinti attempted to hijack the meeting but saw it wasn't flying.  Towards the end he then lifted the large cardboard plans drawn up and attempted to walk out with them.

What he planned to do with them is unknown but he didn't get far before he was stopped.  Now with the City's announcement of implementation of several park's improvements, everyone has braced themselves awaiting when Tim Occhipinti would seize the moment and claim the credit.

They didn't have to wait long since the City's release yesterday.  On Tim Occhipinti's facebook page:

Talking Ed Note: If we could get an answer from Occhipinti's handlers, we're sure we'd hear he's happy to "compromise" and share some credit with the Mayor's Administration - as long as he doesn't have to thank them.

Or maybe we'll just see another dopey story on Hoboken411 saying he's done a great job.  In truth, Tim Occhipinti has done nothing but paid lip service to the idea.

What tangible work we can point to is Tim Occhipinti sided with those undermining Hoboken on numerous issues, one being an easy refinance of the midtown garage saving Hoboken $4 million last fall.

The cost of Tim Occhipinti to Hoboken is already piled in red ink and likely heading higher.
Listening to him on just about any issue including this one only rubs salt in the wound.
Posted by SmartyJones at Friday, March 23, 2012
Tim Occhipinti taking credit for the work of others - Episode IX
2012-03-23T00:01:00-04:00
SmartyJones
Comments