Beth Mason's cameraman and political operative Tim had a new stalking assignment Tuesday night - stalking a member of the public in their unpaid service on the Hoboken Zoning Board.

Last night the target of was Grafix Avenger.

Tim's previously filmed in service to Councilwoman Beth Mason at City Council meetings, the Board of Education and extensively over hours at the former City employee Bill Campbell's hearing.

What most residents don't know is Beth Mason's cameraman is a stalker.

After last month's protest walkout in the City Council meeting, the Old Guard was angry and went to the second floor at City Hall to satisfy their ire. Not having their anger quenched they went out front of City Hall and yelled on the street at the mayor as she left the building, but that also failed to satisfy their appetite.

So Beth Mason sent her cameraman Tim to the mayor's home.  Stalker Tim stayed in front of the mayor's home, camera in hand to film some momentous moment or just to film and act like an intimidating thug for a Hoboken411 purpose as yet undefined.

During a Zoning Board break last night, the newest target of Mason Stalker Tim - Grafix Avenger went over to speak to him and politely asked for his business card.  Mason Stalker Tim did not like a woman he was filming continuously for over an hour asking him a question and threatened to call the police for "looking at him."

(You can't make up this kind of irony.)

At the City Council's budget hearings on March 17th, Councilman Dave Mello inquired about an old resolution where extensive filming in the City Council is provided to the public.  As it turns out, the City Clerk James Farina states there is in fact such a provision in an earlier resolution.

Councilman Mello invites Beth Mason's cameraman Tim to come forward and speak but the cowardly Tim won't go to the microphone.  You can hear him saying "member of the public," in the background.

Tim does not say he is a Hoboken resident.  MSV covered this earlier and asked Tim at a City Council meeting last year where in Hoboken he was from as he claimed to be a resident and he couldn't answer the question only replying, "around."  He apparently didn't even know Hoboken well enough to designate an area at that time.

Watch the short clip and see how Beth Mason comes to the aid of her political operative cameraman.


After Mello makes his inquiry, Beth Mason immediately interjects, interrupting three times to get the floor on what she says is a point of order.  She doesn't say what point of order she wishes to speak on but in seconds it's clear.  She wants to deflect from her political operative Stalker Tim and bring up someone else and talk about them.  Who could it be?

After saying she wants any tapes from MSV (to go along with our emails under FBI investigation) she decides to go on another track talking about how in the Council they do "illegal" things too and maybe the resolution requiring her political operative to submit a copy of his tape to the clerk's office for the public is illegal.  Council President Ravi Bhalla agrees to have the matter reviewed and Mason Stalker Tim continues lurking and filming.

MSV spoke to Tim and concluded he was working for Beth Mason last November.  After speaking to him and saying there's nothing wrong with filming for Councilwoman Mason, we welcomed him in our opening remarks last November:


In seconds, seeing herself linked directly to Hoboken411 and her stalker, Beth Mason goes nuts.

MSV was proven correct when Mason Stalker Tim filmed the mayor for hours at a court hearing.  The video quickly found its way to Hoboken411 - proving we were correct about Beth Mason all along:
http://www.hobokenhorse.com/2012/01/beth-mason-cameraman-identified-filming.html

Talking Ed Note: How much lower will Beth Mason go?  She pays a cameraman to stalk the mayor's home, to film the mayor on a former City employee lawsuit and having the entire tape posted on Hoboken411, and now on a non-paying board focuses filming on a single Hoboken Zoning Board member on the anniversary of her father's death.

MSV has had a few run ins with Tim too.  He's shown interest in stalking MSV after brief remarks to the Council on the St. Patrick's Day Parade following Da Horsey to his seat and then continuing to film  for an inordinate amount of time two feet away for no reason so we asked if he "got the shot" of our brand new FBI hat.  He's also intentionally tried to block photos being taken last month at the BoE.

Unlike other camermen paid by Beth Mason, Tim is not very professional and is taking his "job" to a whole new level.  MSV has also seen him working with other Old Guard operatives, taking instructions from them at meetings to shoot photos of people active in Reform.  Some of those people merely smiled and posed for the cameras at the BoE last month as seen here:
http://www.hobokenhorse.com/2012/02/contentious-meeting-changes-no-minds.html

Will the local media continue to avoid asking basic questions and reporting on yet another MSV exclusive?

What do you think would happen if the mayor paid a political operative to stalk Beth Mason's home and film her and her family?

The Mason Media Complex would be diving all over each other to get that story out and it would probably begin with how the person was arrested.

How far will Beth Mason go to intimidate anyone who doesn't knuckle under to her agenda?

MSV submitted a question to Beth Mason via email:
"What is the purpose of your camerman stalking the mayor at home and non-paid members of local boards?"

MSV would welcome an answer from Councilwoman Beth Mason.
Or do we wait out her silence and see what she does with the footage on Hoboken411?
Posted by SmartyJones at Wednesday, March 28, 2012
Beth Mason's cameraman, Stalker Tim stalks Grafix Avenger
2012-03-28T09:23:00-04:00
SmartyJones
Comments 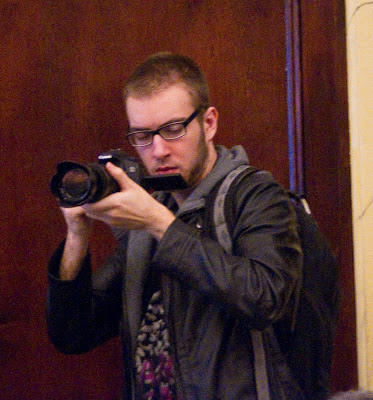