Sign of the Times: Beth Mason at Fox Hills speaking on parks

Talking Ed Note: A reader submitted the above flyer Beth Mason was handing out to people at the north ferry terminal this morning.  Ryan Yacco a political consultant from her spring council campaign last May was seen too.

How many false information claims can you count in this latest Beth Mason release?

Most of the fabrications here are retreads from past Mason pronouncements.  If Mason wishes to make tax cuts, why doesn't she provide some of the "right-sizing" cuts she ran on in the fall of 2009?

Beth Mason hasn't made one (1) right-sizing reduction proposal since.  Not one, discounting her repeated and inane attempts to cut the mayor's and directors salaries a second time, where is the money for tax cuts coming from?

So where's the beef Beth?

Mason has cost Hoboken millions.  Millions in her refusal to abide by her fiduciary oath in rejecting a simple refinancing of the parking utility's midtown garage last November and at least seven figures in her sabotage delaying the sale of Hoboken University Medical Center.  Her efforts to see that sale fail would have probably forced Hoboken into bankruptcy.

The false information if she had succeeded in that endeavor would dwarf her flyer today.
Posted by SmartyJones at Tuesday, April 17, 2012
Beth Mason handing out flyers filled to the gills with false information
2012-04-17T12:06:00-04:00
SmartyJones
Comments

Sign of the Times: Stalking outside a Hoboken school?

A Hoboken parent sent in the following photo of Councilwoman Beth Mason's hired hand Matt Calicchio lurking outside a local school as parents arrived to pick up their children.

Does Matt Calicchio have a child attending a Hoboken school?  Negative.
Who is he waiting for outside a school letting out?
Any other questions?

Well ask Councilwoman Beth Mason why her paid operative she pays $400 a week made a habit of doing so. 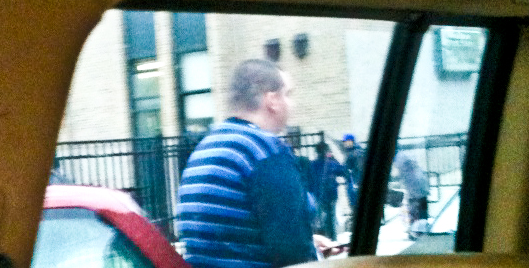 Talking Ed Note: The photo was taken some months back and legal trouble has found several parties since including one councilwoman, one of her paid political operatives and another elected official with a young daughter.

Related: Hoboken Housing commissioner Jake Stuiver adds a sidebar to today's story in MSV's comments recounting an odd encounter with his councilman Tim Occhipinti who was not pleased with his letter appearing here and in the weekend paper.

Stuiver has taken up the matter with the HHA Executive Director and he states Matt Callichio was filming him for unknown reasons when Occhipinti insisted on a discussion about the letter as he was leaving the HHA meeting for other responsibilities.

Was the staged interception by Occhipinti a setup for airing on the morally bankrupt Hoboken411?