Behind the Elysian curtain of the Ruben Ramos fundraiser

Last week's fundraiser held a few surprises in the back room of the Elysian Cafe.  Behind the velvet curtain was an assortment of Old Guard diehards and some eager fresh to be declared "independent" faces lurking.

Paetzold has some unique perspectives on corruption in Hoboken - well unique among those who are not soldiers in the Old Guard.  He's assailed the mayor for discussing Councilman Michael Russo's meeting with FBI informant Solomon Dwek on the city website.

While many in Hoboken view the mayor speaking out against such corrupt behavior as a fundamental role of the office, Paetzold views it as unfair.  He's convinced of his certitude nothing in any shape or form construed as political should appear on the city website.

As a council candidate leading into the council races last spring Paetzold showed up at an early April council meeting and witnessed firsthand a protest against Michael Russo.  His reaction?  He declared the peacefully assembled group of 60 Hoboken residents standing in the rain "a mob."

In addition Paetzold declared Russo's innocence even with the full tape of the councilman's amiable meeting with a would be developer showing his willingness to "do for you and you do for me."  Paetzold a lawyer who works in the compliance area for UBS strongly felt Michael Russo was innocent unless convicted of any crime in a court of law.

MSV reminded Franz the public was just as ably to make its determination of one Peter Cammarano when his FBI transcript of meeting with Solomon Dwek at the Malibu Diner was released.

Any more questions about Franz?


Talking Ed Note: One surprise at the Ramos fundraiser was the appearance of Councilwoman Beth Mason.  While some would like to believe she's kissed the ring and signed on to a Ramos run for mayor, inside sources say no such commitment has been made.

While Franz Paetzold is eager and willing to sign up for Ramos' at-large City Council slate, he doesn't bring Ramos what he needs most (other than Old Guard support): money.  One person who has been offered a spot on a potential council-at-large ticket with Ruben Ramos on top: Frank "Pupie" Raia.  But why would Raia sign a check for $200,000 if he's not sitting atop the ticket?  Pupie's mom told him he would be mayor of Hoboken one day and this may be his last chance to prove her right.

As for Councilwoman Beth Mason, she's keeping her checkbook closed as she mulls over what to do and if she can convince Union City Mayor Brian Stack to accept a check with lots of zeroes and put her on a slate gunning for Ramos' Assembly seat.  Such a move is indicative of another county war with the HCDO.  There's people on both sides predicting either outcome.

In the interim, people are saying the Mason thug squad is out pitching Mason's boy toy, Tim Occhipinti as a potential mayoral candidate.  He may not come off too well to most any observer at City Council meetings with his petulant, arrogant actions and constant mindless outbursts but Beth Mason is pitching him anyway.  If she can't hold the ring of power, she thinks why not do so via her puppet.

Occhipinti was absent from the Ramos fundraiser.  Perhaps that too came at the instruction of Beth Mason.

Hoboken pump fends off biggest test to date with nor'easter

Initial reports show the biggest test for Hoboken's pump have greatly reduced the impact of severe rains in last night's nor'easter.  While some areas near Shop Rite in the western part of the City saw temporary but limited flooding, most other areas saw none of the detrimental impact including the areas of the fourth ward historically hit very hard.


Early reports indicate it was the western area of Hoboken in midtown hit the hardest but it was temporary and by this morning the waters reaching more than a foot in limited locations was already gone but did leave some vestiges of sewage.

The situation this morning can best be summed up with one resident's twitter stating, "Hoboken just doesn't flood like it used to."

High tide arrived late last night and most of the City saw little to none of the flooding in the areas typically affected.

The pump in downtown Hoboken has one additional outflow going online next month.  It's not clear how it will impact flooding with the heavy rains Hoboken received in the past day.  That answer comes with an equal or better challenge.

Talking Ed Note: EmNet monitoring is providing data on the activity level of waters through each rainstorm.  The data has been tabulated over months and is useful in devising strategies for future rain events.

The City expects to have some detailed analysis available after compilation of data over months.

Some photos below of the fourth ward usually hit hard are clear. 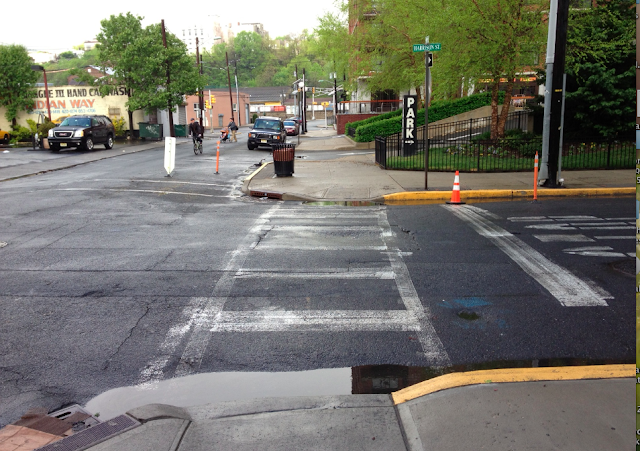