Last Saturday Tim Occhipinti held his self-celebratory party on the opening of the pocket park on lower Jackson Street.  As the ribbon-cutting ceremony took place on Tuesday, Occhipinti decided to have his own party with his favorite playground toy: Hoboken Fire Engines.


Fourth ward residents in attendance submitted photos of the event.  Eyewitnesses to the event saw children climbing up on the fire engines.  MSV understands that's not permitted unless Occhipinti provides a separate liability insurance policy? 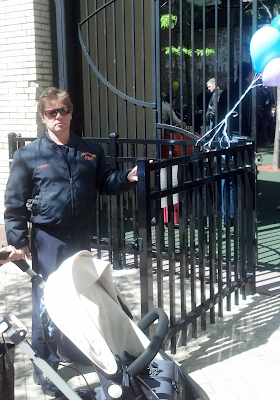 Hoboken Fire personnel were on the scene and pictured left one holds the gate to the park open as a resident enters with a stroller.

It's good to see our tax dollars are going to a good cause: Timmy's self-celebratory park party.

One fourth ward resident who submitted these photos relayed they were confronted by Occhipinti and loudly told not to take picture of the kids in Timmy Pocket Park.

Occhipinti also said "he had the OK for the fire trucks."

Well how does one get fire engines to make an appearance for your political event?  This sounds like even more fun than a pool party.


No literature was seen distributed for the event held between 10 - 12 noon.


Last August, Tim Occhipinti held a block party.  No one really showed up, it was sparsely attended but Assemblyman Ruben Ramos came with his family along with former Councilman Richard DelBocchio.

Oh and Tim Occhipinti had a fire engine out for the kids then too.  See Fire Engine #3 below:

Talking Ed Note: It's been a busy week and MSV aimed to have this story out earlier this but we hope even if you missed Timmy's Fire Engine Park Party you can enjoy it with your tax dollars spent seeing the pictures here.
Posted by SmartyJones at Saturday, May 05, 2012
Saturday's Timmy Time Pocket Park Celebration with his Fire Engines
2012-05-05T12:30:00-04:00
SmartyJones
Comments