MSV was told of a Hoboken411 exchange someone posted a comment on that cesspool that maybe "the mayor should be killed in 7 days..." 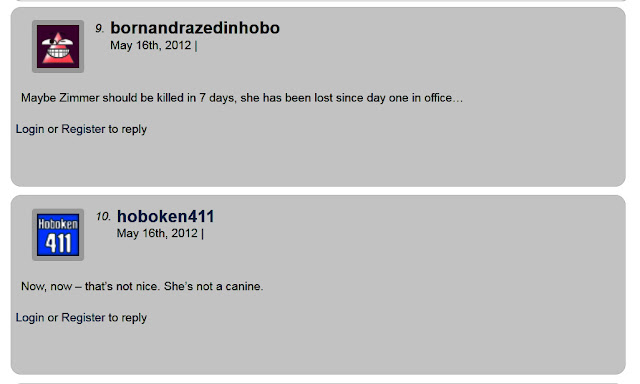 Upon hearing this, there was no comment from Vermont Klaussen at Hoboken411 who is renown for his hatred and vitriol toward the mayor for her council majority refusing to put him on the taxpayer dole with payments from the City back in July of 2009.  He however chimed in at some point that day making light of the utterance the mayor "should be killed."

The Hoboken Police Department responded to political satire on Grafix Avenger when a joke about joining the FBI shooting a door knob and using the Vulcan death grip - a reference to a popular fictional Star Trek television series - by sending over two detectives to question her with a her young daughter at home for more than an hour.

It's unclear what if any response has been made in this matter but MSV understands complaints have been communicated.

What will MORTe, especially Hoboken411 backer Councilwoman Beth Mason say about this?  According to a Jersey Journal story last August referencing Hoboken police sources, Beth Mason along with her minion and Tim Occhipinti complained leading to a visit from the thought police.

One should not expect decency from totalitarians who shamelessly act in such ways.


Talking Ed Note: Grafix Avenger has a story up on the unseemly matter posted earlier:
http://grafixavenger.blogspot.com/2012/05/breaking-hoboken411-posts-death-threat.html 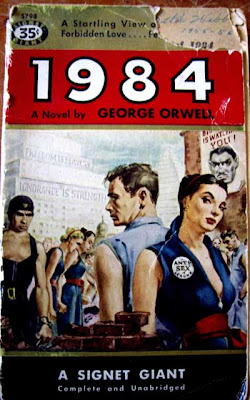 Are you a MORTe minion feeling on the "outs?"

It can't be all that soothing to be a MORTe minion these days.  Losing sleep? "Friends" not returning calls like they used to? Others suggesting meetings at noisy bus stops instead? Higher ups in MORTe looking at you funny and not inviting you out as much to the old haunts anymore? Not seeing new haunts replacing the old haunts closed up?  Waking up in the dead of night scratching, sweating with itchy hives in new locations?  Staring at the ceiling wide awake at 6:00 am thinking someone was ringing the doorbell?


These are all the common symptoms of MORTe FBI rot.  There's currently no cure as every member of MORTe looks out for number one and it doesn't include you.  Hey, you think things aren't that bad right?  They still help you swindle a few nickels and dimes here and there, pat you on the back for letting you use them as a stooge for ridiculous political operations at any number of local institutions.  Things are looking up this summer.

MSV hears the buzz was louder than a beehive when the story broke here about Hoboken411's Perry Klaussen making secretive trips to the third floor of City Hall to see IT Manager and ransacker of the mayor's office communications Patrick Ricciardi.

Throughout City Hall people shared stories of seeing Klaussen working his way through the building to the remote third floor destination where IT Manager Patrick Ricciardi looted everything coming and going in the mayor's office for well over a year.

For those not already enrolled in the Hoboken Boys of Summer Program, this could be your last chance to get your applications in before you are locked out of the summer leagues and involuntarily enrolled in the Federal Penal League.  You don't get to pick your teammates in those games.

Please note, the FBI is available to discuss your favorite position and MORTe tricks.  While there's some who are already holding prime slots in the Hoboken batting order, you may still be able to crack the starting lineup or just as important make the team rooster.

If not, prepare to be put into a different kind of lineup and heading out as far as a West Coast league: The Fed's California Penal.  Climate is great for a ballgame but they typically only get two innings of speed baseball in per day in an hour.  Takes a week to get in a full game.


The FBI in Newark

When you aren't making noise at a City Council meeting, you need to take a break now and then to catch some zzz's and Tim Occhipinti is no exception.  He put one member of the audience to sleep droning on as he is wont to do making audience neighbors laugh uncontrollably he was snoring so loud.

Tim followed his example and caught some rest in between his spittingly weak argumentation.

When you wake up crayons!  Coloring books for everyone.


Grafix Avenger noted some of the ridiculous behavior during Occhipinti's waking moments.  His earlier positions supporting animal control have been tossed out by the Old Guard's lamest source for pumping out nonsense of every variety failing to note the previous Occhipinti vote shouldn't be confused with his new grandstanding on the matter where no difference in policy is actually reflected in the legislation.

Was that confusing?  No it's more painful and you will be likely more amused by Grafix Avenger:
http://grafixavenger.blogspot.com/2012/05/tim-on-spitting-and-puppy-gate.html