A day that will live in Hoboken infamy... 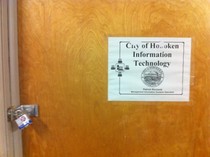 A year ago, MSV covered the story of the remote third floor IT Office being padlocked and an emergency special session taking place before the the regular City Council meeting.

During the emergency session, Da Horsey quickly stole himself (pardon the pun) to the third floor to snap this exclusive pic confirming something big was afoot.

At the time, the FBI was already preparing to swoop down on City Hall but the public had no idea the full extent of the seriousness of the IT Office's closure. MSV sensed enough that Beth Mason's ghostwriting minion on Hoboken411 attempting to deflect from IT Manager Patrick Ricciardi and attack the mayor's staff was an absolute loser.

MSV's horse sense smelled it out and so it's worth a look back to that day and what are momentous things looming ahead with summer around the corner.


Beth Mason and Michael Russo were on the hunt for blood at that same council meeting with the targets being the mayor's staffers and Reform websites.  A year later the hunted are now the hunted and the FBI is tracking a forensic trail of troubles pointing to the Beth Russo hydra surrounding the Data Theft Conspiracy Ring and in all probability far more with the massive laundered street money operation where tens of thousands of dollars were spread around like candy so the increasingly unpopular Mason could retain power.

MSV noted last July Mason's campaign report failed to account for $52,000 in street money, an insanely exorbitant amount only detailed much later.  Tim Occhipinti complained about far less street money more than a decade back but has had nothing to say on this unethical or possibly legally problematic expenditure.  Da Horsey should note, no one else in the local media has either.

We'll be revisiting this but for the moment let's say the criticism of inadequate explanation for expenditures went unanswered in reports here and in our direct questioning of Mason campaign spending in the City Council last June.  It still is and as it was not accounted for, the official $138,000 tally for a ward race in Hoboken can not be the true tally.

It was likely more, far more than over $200 per vote.  It's legality a year later is very much in question.  More grist for the mill for the Feds to dig into.  Mangia bene!

As MSV covered the breaking DTR story a year ago just before the FBI arrived:

Will the criminal investigation lead to others, even Mason411 and co?

While it's now confirmed a criminal investigation is ongoing at City Hall and outside law enforcement agencies are involved, it's only a matter of time before the frog marching in cuffs happens.  When it does, how many folks are going to be pulled into its orbit?

Hoboken411 not a day after being flagged in City Council with a series of questions in its ties to Beth Mason and doing its ugly worst, is becoming the focus of more and more questions.  Just yesterday the Hudson Reporter stated the leak on the confidential efforts to reach a settlement on a police discrimination lawsuit from several years back came from someone on the City Council.

Then today in an effort to quell the focus on Beth Mason and her Mason411 minions, the uber-smear blog went  into a dance of death to associate the two targets of Beth's desire to the now padlocked technology office.

At some point today, not one but at least two stories were yanked at the Jersey Journal based on the nasty screed by that unknown, uncredited ghostwriting minion who went home late last night and stayed up into the wee hours pumping out his typical formulaic vitriol toward Beth Mason's current (and ever expanding) enemies list.

The foolish conclusion it would find no resistance by attaching the word "rumors" to the list of half lies, full out fabrications and distortions proved wrong.  City Hall's legal counsel saw the attack on the two city employees and acted to puncture that balloon, not dissimilar to the actions to keep mum on the obvious target of an investigation where a padlock is sitting in full view telling everyone where the buck starts if not stops.

From the looks on some of the Old Guard faces early in the meeting, whatever was said did not hearten them although we did not see a repeat of "The Al Show," starring Mike Russo and Nino Giacchi expressing concern for the soon to be departed.  This time everyone was quiet on the matter but it was clear this is not good news for the Old Guard.

There's no question a fire is burning right now and fire can spread quickly.  No one is telling MSV anything as the professionals in charge  just won't talk on personnel matters and have made that abundantly clear this time as before.  But horse sense says this is a leaky faucet of a problem and it's not ending with the party it's starting.

There's connections to Hoboken411 here too.  At this time, they can't be illustrated but there was a working relationship, trust us and know the respect for the audience we hold is completely counter to the contempt you get from Das Smearmeister and its political mistress of the bottomless checkbook.  Although any claim this will lead to some of the most cancerous actors in town is premature, we're sure it's going to touch close and get real chummy with some folks who don't want to be anywhere near where the early fingerprints are being taken and measured.

The real question is where those fingerprints will lead.  And in Hoboken, what's acceptable behavior is often nowhere near legal meaning who and what is ensnared in the trap of the law may be further and farther than many imagine.  Just know the Reform side of the ledger isn't losing any sleep over it.

And there's your happy bedtime story from Da Horsey.