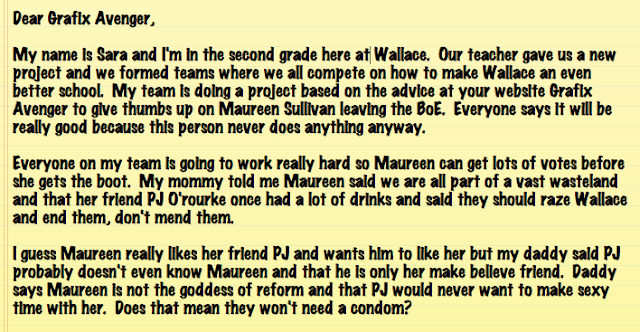 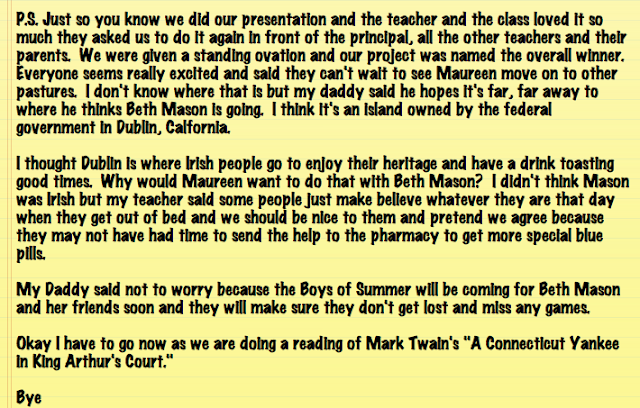 Talking Ed Note: If you want to support the kids at Wallace and the district, please go to the link and give it a vote up.  The kids and everyone in the district will certainly appreciate it.

Checkbook mercenary journalism: How to get noticed and influence the editors at the Hudson Reporter

There's checkbook journalism, yellow journalism and then there's mercenary journalism sold to the highest bidder.  For a month the rumblings about a feature on local "blogger excess" at the Hudson Reporter was stalled with a bullseye aiming for this website and another political target, our colleague who generates most of the heat with her ever cherished Zoning Board seat: Grafix Avenger.

The Hudson Reporter reveals a hand, somewhat intentional it appears, in its long time dealing with a fishy mercenary after a recent avalanche of paid ads from Councilwoman Beth Mason.  The output is a less than credible newsworthy effort by Al Sullivan in his column last weekend.

How many ads do you need to buy to get a hit job done on a political opponent?  That's the inevitable question MSV is posing to the Hudson Reporter after Sullivan's column highlighting a non-issue in the form of a Grafix Avenger story last month.  How a story becomes a story is the heart of the question at hand. Which leads to one and only obvious conclusion; please make out the check to...

The story garnering tree killing column inches was a delayed Grafix Avenger piece pointing to two words and non-existent "Nazi imagery" in a post highlighting Mason's death wish for the Hoboken University Medical Center.  The painfully truthful story highlighted Mason's efforts to put to sleep the hospital that refused to die in spite of her best or worst efforts.  (We're not going to illustrate with an analogy because well you never know when a Mason henchman will ascribe it to Nazis.  Is the Soviet totalitarianism variety okay?)


Spite was the sole reason to draw blood and counter the strenuous efforts of Mayor Dawn Zimmer and hospital board chair Toni Tomarazzo to save the hospital, more than a thousand jobs and Hoboken from bankruptcy.  As a result, even with Mason's obvious face saving effort claiming she and MORTe saved the hospital, (also printed without any required examination of equal prominence at the Hudson Reporter then or since) she has no base of voters to remotely attempt a third mayoral run next spring.  They've long turned from her and the Applied Housing vote urged to turn out on her behalf last year with tens of thousands in street money encouragement is a core voting bloc for a Ruben Ramos mayoral run.

With Vermont Klaussen on his way out, Beth Mason has lost her reliable outlet to pen character assassination on Hoboken411 but she's trying to make up for it by writing check after check to the Hudson Reporter courtesy of her husband Ricky Mason's earnings from Wachtell, Lipton, Rosen and Katz where he serves as a preeminent bankruptcy attorney. From big business bankruptcy to complete moral bankruptcy in one fell swoop: Geronimo!

The month long effort to do a story on local Hoboken websites and their "excess" led to MSV along with Grafix Avenger being asked about our creation and use of Nazi parody videos on YouTube with GA told she was being given an opportunity to defend herself.  The only problem was the Hudson Reporter was eating from a sordid bag of rotten goods and rather than do five minutes of checking on their own hopped straight to taking down those "yuppie" reform writers.  (MSV hears they are very fond of hating "yuppies" at their uptown Hoboken office even with Reagan's time as President decades passed and the ironic delicacy of Mason's checkbook notwithstanding.)

So a month into a quagmire of their own making, the Hudson Reporter hosts a lengthy meeting at their office with Weehawken based political operative James Barracato, a paid henchmen of Mason who is given the ear of publisher Dave Unger due to the magical influence of Mason's checkbook.  FinBoy presents his defamatory trumped up evidence as the basis for a spoon fed "story" and Mason buys a block of page 3 ads with no end in sight. (Has it been four or five weeks in a row not counting her February Super Bowl ad?)

Putting aside this grotesque example of mercenary journalism, there's the obvious festering sore in the he said-she said Al Sullivan column not telling us anything about the he.  James Barracato is NEVER identified as a paid political operative of Councilwoman Beth Mason nor is the reader told why anyone should even remotely care about what the Weehawken fish thinks about anyone or anything for that matter in Hoboken.

In journalism we call that the first element of a story - the Who.  It's MIA but why?

One commenter over the holiday weekend posted their reaction to the sticky problem:

The Reporter should go right ahead and post a rate card as to how many ads are required for them to run an untrue hit piece. Dave Unger ought to have rates established by now, why doesn't he release them? If Al Sullivan was at least half a man he would post a counter-piece on his column. We'll see (not holding breath for him to do anything justice). Beth, keep up the good work keeping a disgusting lie infested local rag in business. Quid pro quo anyone?!?

Of course local institutions should take their self-proclaimed roles a bit more serious, removing their political agendas from being so blatantly obvious but this is unlikely to happen.  The fourth estate has been intermingled with real estate but there's a notion the internet is the next venue where the people are rising up to replace the failed and corrupt institutions where their voice no longer matters.  The Hudson Reporter is of course within its constitutional rights to pretty much print whatever they wish and if it's solely driven by their economic interests, it's not a crime.

But can we at least see a rate card for a hit job?  Beth Mason shouldn't get the exclusive there.  People want to know how they can get in on the action.  After all, it's mercenary journalism.

Talking Ed Note: The FBI's made repeated visits in Jersey City, West New York and Union City in recent months before the arrests taking down the West New York mayor and his son last week for computer intrusion.

What do you think the Hudson Reporter will say when the inevitable return visit comes to Hoboken?  Will they again be the vociferous defender of the Old Guard who are in line to be cuffed and driven to Newark for appearances in Federal Court.  Is Beth Mason's massive ad buy with no election in sight part of a PR strategy to get them to weigh in on her side when the hammer inevitably falls?

Shades of the Camarano and Hudson County crooks defense redux?  Add to the mix the Hudson Reporter last year deeming the FBI carting out computers and boxes of documents the Thursday before Memorial Day last year as applying a hammer to an insect.

In the meantime it's not only the arena of journalism corrupted.  There's the attempt to use the courts to shut down speech and political dissent.  Once again, it's Beth Mason deploying yet another Soviet style gulag operation in a plan already gone awry.

That's currently under additional legal review here.  The limited coverage at the Hudson Reporter over the weekend following up on our earlier exclusive story last April means the determination to use the court as an instrument to repress that story has already failed.

In this vein, the Hudson Reporter noted Mason's lawyer representing another of her political operatives Matt Calicchio served invalid subpoenas to BoE trustees.  MSV noted this last week and can confirm it appears Mason's lawyer attempted to serve all nine sitting board members.  One person not on the BoE majority was incensed by the tactic and had words on the street over the weekend in a random meeting with the hapless defendant who pointed to his lawyer as the culprit.  And who pray tell is paying the lawyer?

Good thing Mason believes the schools shouldn't be politicized.  She's said that for years running including to MSV before a maxed out family check showed up for a slate opposed to Kids First.

Now a Mason paid political operative is heading to trial in June for allegedly harassing a member of the BoE majority and her five year old daughter taking the term political opposition to a whole new level.  Or would that be a new Beth Mason low?

Related: Grafix Avenger weighs in with more on the unseemly connections between Beth Mason, the Hudson Reporter and her paid henchman detailing the group of people attending a trial rescheduled in Union City Municipal Court who all share one thing in common - they're all on counte$$' payroll including the defendant.

This feature is dedicated to MSV Executive Publisher Jimmy the K who never wavers in support of truth, honor,
and the real Hoboken way. Up the Republic!
Posted by SmartyJones at Tuesday, May 29, 2012
Checkbook mercenary journalism: How to get noticed and influence the editors at the Hudson Reporter
2012-05-29T07:36:00-04:00
SmartyJones
Comments