The Hudson Reporter and Beth Mason: more 'splaining to do

The expected showdown in Union City Municipal Court last week where a BoE trustee would face down a Beth Mason political operative in a trial after over six months of hearings finally will be heard June 7th.  That only scratches the surface of what's transpired.

The trial where harassment charges by one elected official against the political operative of another has been ignored for months in town even as MSV has dropped hints for quite some time before finally writing an exclusive back in late April.

At the court last week, the Hudson Reporter noted in its weekend story some people in attendance connected to BoE trustee Theresa Minutillo while missing a host of people backing Mason operative Matt Calicchio if not with emotional support, compensation for their time as in dollars for donuts.  Almost all of them if not every single one is being compensated with currency from one familiar Hudson street residence.

Calicchio as a Marshall Drive based HHA resident certainly doesn't have the means to cover months of court costs with a high profile attorney but oddly has declined to sign a "no contact" order to leave Minutillo and her young daughter alone.  Doing so would have ended the matter months ago with no publicity on the case whatsoever.

Clearly Beth Mason fears it will come back to her but that's a moot point now. It has. She's been all in to see her political operative walk away from the charges with nothing sticking, of course in doing so she fails to see the moral imperative of her hired underling's alleged actions.


"Not Perry" at the last City Council meeting was so bored by Tim Occhipinti droning on he fell asleep.  He was snoring so loud, the whole side of the room was laughing until Council President Ravi Bhalla hit the gavel and finally woke him up.

Tallying the Mason players, there were four possibly five people in court last week on the Beth Mason payroll. Among them:

So with this group almost to a person getting paid to witness a favorable result, what possible chance does Theresa Minutillo and her little girl have?

Well that all depends on the Union City prosecutor and they certainly are heavily weighed down with case after case to handle in the densely populated Hudson County town.  There's additional word there may be a relationship with the Mason retained lawyer and officers of the court - the deck may be stacked pardon the pun.

Talking Ed Note: Did the original Hudson Reporter cover story include some if not all of the Mason people in the Union City court last week?  Or like the story discussing James FinBoy© Barracato, were all references to Beth Mason eliminated to keep a major ad buyer happy?

MSV would love to know but we don't expect the Hudson Reporter to answer.
Either way there's some 'splaining to do.

Related: Grafix Avenger goes deeper on the Mason-FinBoy© relationship of expectation with the Hudson Reporter on the other half of the "journalistic" ledger.

MSV subscribers will be receiving a special addendum on this case via email today.
Posted by SmartyJones at Thursday, May 31, 2012


The Hoboken Planning Board meeting to review the Monarch at the Shipyard application has been re-scheduled for the final time.  This last re-scheduling secured a special meeting and a large enough venue to hold all the residents opposed to this project.  The meeting is now scheduled for 7pm on Thursday, June 14, 2012 in the Wallace School gymnasium at 1100 Willow Avenue.  This special Planning Board meeting will only have the Monarch project on the docket.  It is incredibly important that you come out and show your displeasure with the overdevelopment of our neighborhood.  This remains the most important meeting in our fight and gives us the opportunity to be heard by our local city officials.  As a reminder, Applied Development made a commitment (and signed a Developer's Agreement) to the city of Hoboken in 1997 to put in much needed public space as part of the city’s approval for their original residential project.  Now that all 1,160 residential units are complete and occupied, Shipyard Associates has come back and is trying to amend the original application with the goal to residentially develop this last plot of land rather than provide the promised open space.  They should not be able to get away with this.

In other good news, counsel for the Hudson County Board of Chosen Freeholders decided to not hear Shipyard's appeal of the Hudson County Planning Board's rejection of their application.  Instead, she stated the Freeholders will simply uphold the Planning Board's rejection.  We believe Shipyard Associates will ultimately bring this action to the courts to decide, but this is another victory for our group.

Please let us know if you have any questions and we look forward to seeing you on Thursday, June 14th at 7pm. 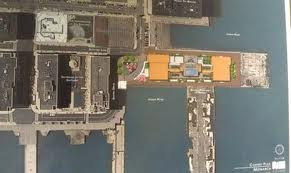