It's been a bad week for Beth Mason's ambition to do harm to Reform good governance websites.  The odd smile she had from two council meetings ago is probably gone and replaced with blood curdling finger nail primed action taking down the kitchen wallpaper.  Hey, time to warm up for the big show later.

Mason's poor little fishy looked pretty inert and not too dangerous after being yanked out of the Hudson: 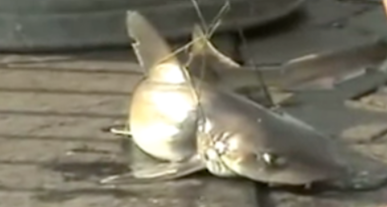 Those were better days and nothing like where he finds himself now, ready for skewering: 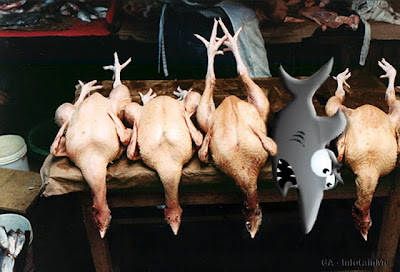 Have a nice weekend FinBoy.  Time to fire up the BBQ!

It's not been a good week for the Weehawken based Beth Mason paid political operative.  Da Horsey has always told FinBoy "never let them see your fin" - when they see you coming trouble starts.  In this case, Grafix Avenger smelled him first, from a mile away.

A monthlong effort produced the net result of exposure, ridicule, defamatory submissions, claimed "Nazi imagery" - a Beth Mason "I'm a victim" favorite - and yelling at the office of the Hudson Reporter where the fish was used to getting his way.

A bad week for your underling also makes for a bad week for the boss.  Councilwoman Beth Mason who was oddly all smiles early in a recent City Council meeting for no reason a horsey in the midst could see had signed off on a multi-pronged political operation.

Well we've seen this routine before but the one thing with Beth Mason no other political group including the previous success of the Russo clan had is when she makes a mess, she merely goes back to the checkbook writes more checks and keeps the assault on the truth moving forward.

Some problems are not so easily resolved with such methods.

Related: Grafix Avenger has an insightful story on what happens when Beth Mason's FinBoy isn't getting what "he" paid for - namely character assassination typically seen on the almost defunct Hoboken411 - and as Beth Mason would say "get them."

Talking Ed Note: Next week the City Council returns after a long hiatus of three weeks.  Up to bat is the one and only Southwest park plan including the possible use of eminent domain to break a logjam in negotiations.

The discussions for lots on Block 12 have broken down with the City eager to use a surface parking lot and other related non-residential property to build the long held hope for a Southwest park.

Tim Occhipinti who left one council meeting to speak at a Zoning Board meeting on behalf of a bar riddled with zoning violation built across the street from that parking lot is not saying how he will vote on the matter but his comments ring hollow.  Typical Tim.

Occhipinti who wanted $3 million in county park funds appropriated in the Southwest is now complaining about the effort by the City with the county one year deadline up in August.

More hollow remarks with unsubstantiated criticisms and claimed alternatives with no substance to support the contention.

If Southwest park advocates want a park, they will need to show up at the next City Council meeting and press the matter much as the community did in a Sunday special meeting where MORTe finally got the message and stopped blocking a parking agreement at the midtown garage from going into effect days earlier so the Hoboken University Medical Center sale agreement could be finalized.

Occhipinti is making the same noises Councilwoman Terry Castellano did on that issue claiming there were other options for HUMC - re: available bidders.  Same stunt here, same tactic with the same cynicism.