And wait who's that off the line for Hudson County clerk against Barabara Netchert?  Why that's Hoboken's Paul Lichstein who's worked on Tim Occhipinti's campaign and also is a college classmate of the 2010 2nd ward council candidate Franz Paetzold.

Would ya look at that.

Election Notes: There's one race with two heads butting hard in the 9th Congressional and Max Pizarro writes that one candidate is questioning 2,000 absentee ballots re: vote-by-mail  votes of the other - all out of Patterson, NJ.

In a battle where two congressional seats are being combined, it's US Reps. Bill Pascrell and Steve Rothman with the later pointing the finger at the other.

The Passaic County of Elections has impounded the ballots to the dismay of the Pascrell campaign.

Last weekend, Tim Occhipinti tweeted he was campaigning for Pascrell in Englewood Cliffs.  Can a Occhipinti monsoon of paper ballots be far behind?  It's an Occhipinti specialty.

Birds of a feather...

Small potatoes compared to what happened in Wisconsin yesterday.  That echoes across the country and bodes badly for the public service government unions.
Posted by SmartyJones at Tuesday, June 05, 2012
Sign of the Times: Election Primaries in Progress
2012-06-05T10:58:00-04:00
SmartyJones
Comments

From the desk of Council Vice President Peter Cunningham:

We hope that everyone has enjoyed the spring, and will soon be settled with summer plans, which we are finalizing.  We have been extremely busy with our children's athletics and academics, which all in all have been very rewarding and great fun.

Tomorrow is election day, and the polls are open from 6am to 8pm.  Please take notice of polling location changes (in the 5th ward, 2nd District).  Fifth Ward residents that voted at the Elks Club, will now vote at Brandt School at 209 9th Street.

Wednesday, the biggest issue on the agenda is the use of eminent domain for a public purpose.  That purpose is a park.  We continue to lack open space even with 1600 Park and Sinatra online.  Status updates are forthcoming on those projects, and they are "meeting their deadlines."  But because of poorly managed and ignored balanced development by past administrations and city councils, failed promises of parks and other amenities over the last ten years, we have much to do, and continue to be committed to meeting the demands of new urban living.

We cannot be afraid to avail ourselves of all tools necessary, including eminent domain when negotiating to purchase property for a public benefit.  This is vastly different than the controversial Kelo vs. New London case where property was taken from one private property owner to another for economic development - http://www.washingtonpost.com/wp-dyn/content/article/2005/06/23/AR2005062300783.html.

In addition, on the agenda is action under consideration to evaluate other tracts in Hoboken to be acquired for public purpose, utilizing all tools at our disposal.

From a funding standpoint, we have already authorized a bond to be supported in part by the City's Open Space Trust Account.  In the case of the parcel in SW Hoboken - Block 12, there's additional County Open Space Trust funds to seed the acquisition.  Now is the time to act as time is of the essence.  Rates are at historical lows and we are focused on properties identified in our master plan for parks.

There's more to report regarding our commitment to addressing our failing infrastructure, and that will follow.  I have to say in closing that I am extremely pleased with the budgeted hiring of Quentin Wiest, BA and Stephen Marks, Assistant BA.  Both have excellent skills to meet the ever-increasing demands of the City of Hoboken.
I always like to hear from you with any questions, comments or concerns regarding the above, or any other issues.  And as usual, please pass along to your friends.
-- 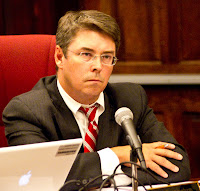 
Unrelated: Grafix Avenger gets to do the funny side of the demented reality of the polling station move from the Elks Club aiding the handicapped courtesy of the addled brain of Vermont Klaussen.
Posted by SmartyJones at Tuesday, June 05, 2012
Council VP Cunningham: National Election primaries today, SW Park stakes and new polling locations for some in the 5th and 2nd ward
2012-06-05T06:46:00-04:00
SmartyJones
Comments

Tim Occhipinti who holds the fourth ward council seat is forced to choose between developer donors or a Southwest Park Wednesday night and eminent domain is a binding tool on the table as part of the council vote.

The last vote on eminent domain to bring about finality in negotiations to Block 12 almost a year ago put him in a position where a meaningful vote lay before him - the fifth of nine deciding if the City would reach this final point this week.

Occhipinti who has hailed himself for "Timmy Pocket Park" on lower Jackson Street, an effort he had no hand in delivering is poised to actually have an accountable role again where such a park could be built in the Southwest for the fourth ward.

His record for acting on behalf of a Southwest Park is mixed and sounding more cloudy as the vote approaches.  He voted yes on introduction of the ordinance after an eerie pause to allow the mayor's proposed initiative to move forward but won't commit to it or his earlier vote where eminent domain was narrowly approved 5-4 with his MORTe colleagues voting no.

At the last City Council meeting, Occhipinti was vote number seven to approve and still he had to pause so the slow wiring in his head could catch up to his mouth.  After an uncomfortable delay, he weakly eked out a "yes, on introduction."

The vote Wednesday is likely to see some more consistency.  At least two, the Russo clan: Michael Russo and Terry Castellano are rock solid for no.  The third ward councilman has been a model of principled consistency: no eminent domain for the public good as in a park.  Alternatively, if it's the Kelo version where huge tracts of lands in the northwest are at stake moving to a friendly developer such as Frank "Pupie" Raia and all condo sales commissions are locked up under Mama "Five-bucks-a-tow" Russo, well it's game, set and match - full steam ahead.  The Russo clan cleaned up taking in at a minimum hundreds of thousands of dollars on one upper grand shoebox development.  (Is that what last resort means?)

Tim Occhipinti has a different set of issues and none are so rich to his self-interest.  Earlier this year he walked out of a live City Council meeting to go downstairs where a Hoboken Zoning Board meeting was taking place on a problematic structure in the fourth ward that is quite literally riddled with violations.

The proposed establishment had, among many other problems, extended its construction out on to City property.  Occhipinti attempted to speak on behalf of the developer who had lined his pockets with loot, a rarity in Hoboken - loot of the local variety that is.  (Much of Occhipinti's campaign monies have come from outside Hoboken, an exceedingly high amount especially when you remove his wheeling benefactress Beth Mason from the equation.)

As Occhipinti's heart and feet have been clearly carried by developer money, he's stuck in a position where he's claimed on too many occasions to want a Southwest Park.  He's tried to create wiggle room to get out of it leading into the meeting Wednesday.

Let's look at some recent comments quoting Occhipinti but first - let's go to the videotape:

Here's a snapshot of what Occhipinti is captured on video saying during election season:

"This open surface parking lot...the properties behind you... are part of the master plan for a Southwest Park... We have to use funds available (from the $20 million bond) and I fought very, very hard for that bond...we target properties here... to bring us the park."

Well this was Campaign Tim, when he was out at the exact very property that the mayor is now saying let's close on and get a Southwest Park built.  So let's compare and contrast these statements from Campaign Tim with those last week:


“The [Zimmer] administration dropped the ball,” said Occhipinti. “They sat on [the $3 million County grant, and] they were not aggressive.”

“I’m very disappointed in the fact that they waited and waited,” said Occhipinti. “Now it’s the last minute and their backs are against the wall, and they’re trying to force eminent domain down the throats of the property owner. I believe this park land can be acquired without the use of eminent domain if properly negotiated.”

Occhipinti also prattles on about the City not giving negotiations enough time to take place.

Forgetting Campaign Tim for a moment, do even these comments make any sense even if we give him the benefit of the doubt any of his claims here are true and the fact Occhipinti voted last year for eminent domain?

How does Occhipinti know the City waited too long?  Where's the evidence on his claims or that the parking lot owners have not had a "properly negotiated" opportunity?  (Is there a 2012 appraisal Occhipinti is referencing or is he just making it up as he goes?)

Whose interests do you think Occhipinti is really looking out for here.  Well tune in on Wednesday night at the Hoboken City Council and see if he can make any sense there.

A parking lot or a park, Tim Occhipinti must choose.

Talking Ed Note: Just a funny observation, who did Tim Occhipinti fight against "very, very hard" to get the $20 million bond toward a park in the Southwest?  It's the mayor's proposal and it's been backed by the council majority: Cunningham, Giattino, Marsh, Mello and President Bhalla.

Did he fight "very, very hard" against Michael Russo, or was it Terry Castellano or Beth Mason? 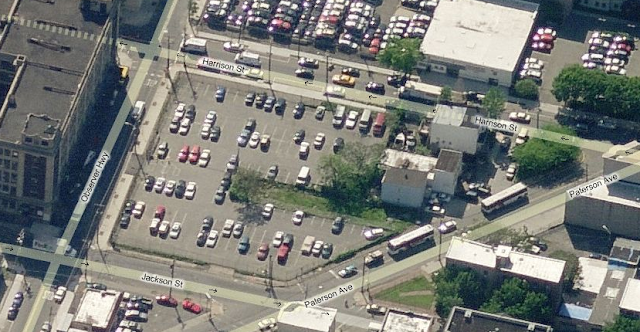