In a party line vote with a Southwest Park the stakes, the City Council voted 5-4 allowing for the use of eminent domain in additional negotiations to pursue almost an acre of land on Block 12.  The property is currently under the control of a single owner who runs a surface parking lot on the location.

Tim Occhipinti who voted for the use of eminent domain in the Southwest just last year reversed his position and voted no to the ordinance.

Occhipinti spent much of his initial comments blaming Mayor Dawn Zimmer for failing to deliver on a Southwest Park six acre concept plan and said he would not support voting in favor of eminent domain.  Last year Occhipinti voted for the City to use eminent domain in negotiations as part of the initial process to identify land for a park in the southwest.

Occhipinti himself had asked for a $3 million county grant be directed to the area for the purpose of a park in the location designated for a park by the City's master plan.  Appearing very defensive, his initial remarks had nothing to do with his vote and his decision for doing so instead deflecting and complaining oddly against the mayor as if he was a resident with no direct vote on the matter.

Voting against: Council members Terry Castellano, Michael Russo, Beth Mason and the occupant of the fourth ward seat where the park would be built, Tim Occhipinti.  (MORTe)

Many people showed up filling the Council Chambers that had been more empty in recent meetings, speaking on both sides of the issue over an hour.  Notable among them Hoboken open space activist Leah Healy and Nathan Brinkman who is opposed to eminent domain in general.  (Video of speakers to come.)

After the vote on a short break, Tim Occhipinti went to the back of the room to distribute his prepared remarks to Hoboken Patch and the Hudson Reporter.  Told he had voted for eminent domain on a park for the Southwest just last year he responded to MSV saying, "That was just a piece of paper."


Talking Ed Note: Most of the meeting was under control but the Old Guard in the rear of the room took opportunity to heckle and yell out at times and Council President Bhalla did not address it aggressively and it continued to erupt during the discussion.

Da Horsey was threatened inside the meeting by Old Guard operative Nick Calicchio who interrupted a quiet discussion near the rear of the room with Hoboken resident Nathan Brinkman saying, "If you don't want to get thrown out of this meeting, stop taking pictures."

He was told to get away and consider this a formal communication Mr. Calicchio.  No threats are acceptable.

MSV has taken pictures at government meetings for almost three years and notes it was never an issue when others did it on behalf of Hoboken411.  The Calicchio brothers apparently both Nick and Matt complained about photos taken of the rear of the room (from a distance of maybe 100 feet mind you) and a police officer came over to inquire with their complaint.  He agreed on our right to take photos at government meetings and went back to deliver the bad news to the Calicchio brothers.

The officer was very professional and MSV thanked him.

The Southwest Park idea, a dream for residents of the fourth ward comes to a final ultimate vote for all the marbles tonight. About a year ago, the concept of eminent domain was put forward by the mayor, a generic request asking for a tool to make negotiations serious. Tim Occhipinti in a rare occasion learned he was going to held accountable for supporting a park in the Southwest the mayor was urging support for and became the fifth vote.

Tonight Tim Occhipinti finds himself in a similar predicament.  But since his vote in favor of eminent domain last year, it's been learned he's taken money from a local developer of an establishment that ignored Hoboken Zoning laws and is looking to retain that structure as it eyes the parking lot across the street as a parking place for customers.

Occhipinti's MORTe colleagues are not likely to vote for the Southwest Park.  Beth Mason wouldn't even vote to approve building a traffic light to support safety moving forward 1600 Park.  The Russo's don't care about  parks, they care about power and money.  Councilwoman Terry Castellano opposed Pier A park and years ago told the city there's was sufficient open space recounting it around town - by the square foot!


So in a potential repeat scenario to last year's vote, Tim Occhipinti may find himself faced with the dilemma of supporting developers who he's consistently sided with and the fourth ward residents who have mostly nothing but concrete building after concrete building to look at in their neighborhood.
No worries though.  Be ready to hear "the developer position," - how Mayor Zimmer is acting hastily and unnecessarily, how the negotiations are being rushed while at the same time they were not done properly, how this power grab is unfair to the parking lot owners.

In short you should hear a continuation of the nonsense he was quoted saying recently. Tim Occhipinti has stood with NJ Transit, Academy Bus, spoken out for the Rockefeller Group who have tried to build a Freedom Tower type structure in west Hoboken and left a live City Council meeting to speak on behalf of a developer's illegal structure with numerous zoning violations at a Hoboken Zoning Board meeting.

On the other side he's tried to take credit for a pocket park on lower Jackson Street even walking away with the City's plans at a public meeting for who knows what reason.
But tonight, let's see what Occhipinti says and then what he does.


The full meeting agenda is here:
http://www.hobokennj.org/council/council-documents-2012/
Posted by SmartyJones at Wednesday, June 06, 2012

Councilman Dave Mello: Be heard tonight on a Southwest Park and beyond

In a comment on MSV yesterday, Councilman Dave Mello wrote:

This is a crucial vote for Hoboken. I, for one, have grown tired of people campaigning on promises of more open space, and then failing to take the difficult steps necessary to ensure and facilitate its creation. Please come out on Wednesday night and support this measure, and help our City Council to truly advance the process of creating a Southwest Park and more open space throughout the various western neighborhoods of Hoboken. The time for a Southwest Park is now. 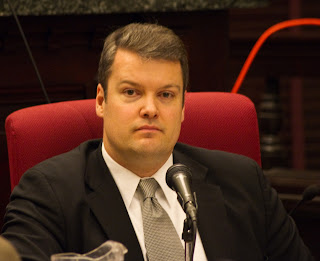