From the desk of Scott Siegel, Republicans of Hoboken:


On Monday night the Republicans of Hoboken (ROH) led by Diana Davis easily defeated The “Unbossed” slate led by former Mayoral candidate Nathan Brinkman. The ROH increased their previous total of 33 candidates to 51, while the Unbossed slid from 11 to 8. The ROH won all but one head to head matchup, with Nathan (Ward 4, District 1) being the sole exception. 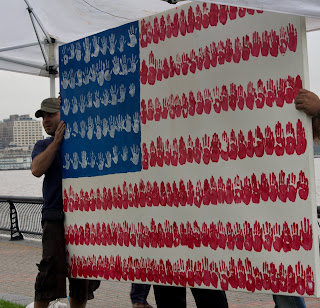 Earlier boasting by Brink man's side proved to be unfounded as the final results showed. They fielded 18 candidates with considerable help from Democrat Frank "Pupie" Raia.

There were several “mistakes” made by the Hoboken City clerk's office. Former NJ judge Al Siss was placed in 2-2, despite the fact that he is registered in 2-3. Both the Hoboken and the Hudson County Clerk's office signed off on his win. Similarly Ward 2, District 5 candidate Brian Buzzelli was left off the ballot despite submitting a valid petition. Even more disturbing is the fact he requested a VBM (never submitted) so he and another similar Republican submitted provisional ballots that somehow never made it to City Hall. That's Hudson County for you!

This is the most seats filled by local Republicans in many years, showing that the party is slowly gaining traction.


Talking Ed Note: One person familiar with the efforts by the Hoboken Republicans for Unbossed Leadership denied there was any assistance whatsoever in filing their candidates on the ballot by Frank "Pupie" Raia.
Posted by SmartyJones at Tuesday, June 12, 2012
Republicans of Hoboken Sweep Local Committee Elections
2012-06-12T21:43:00-04:00
SmartyJones
Comments

According to IRS rules, 501(c)(3) organizations are required to file every year in most instances.  In almost two years, the Mason Civic League, Inc. has filed nothing!

Back in July of 2010, the Mason Civic League, Inc.'s Certificate of Incorporation shows a troika filing; with signatory Councilwoman Beth Mason, her husband Ricky Mason and the Weehawken political operative James Barracato, aka FinBoy© listed on the initial board.

According to the IRS regulations, a request for these required financial filings can be made in person at the main office of the Mason Civic League Inc, and for those purposes it's officially registered at:

In person requests at the above address are expected to be fulfilled generally the same day and written requests within 30 days.


IRS rules also state the Mason Civic League, Inc jeopardizes its tax exemption "if it ceases to be operated exclusively for exempt purposes."  Based on the number of political operatives already identified "working" for the group, an examination of the Mason Civic League's status is unlikely to pass legal muster.

MSV would attempt to obtain comment from Beth Mason but as many know she's in hiding from media after the Union City Municipal Court judge verbally tore her employees to shreds.  It's likely to stay that way right up to the next City Council meeting.

As an aside, where does Beth Mason's dirty tricks political operative James Barracato list as his address?  It's 10 Stuyvesant Avenue, Lynhurst, NJ.

That's not the address of the Weehawken based fish.  That's the former now defunct address of yet another political operative firm on the Beth Mason payroll: the Cratos Group.  MSV profiled the organization and its founder, Adam Alonso for what looked like a case of clearcut money laundering into the Tim Occhipinti campaign:

The whole Mason family charity under Beth and Ricky Mason appears to be a front for avoiding truthful ELEC campaign filing regulations and laundering payments to an unknown number of their paid political operatives.

Among those identified what have James Barracato, Ryan Yacco, Matt Calicchio, Tania Garcia been paid to date and what services have been performed?  What of the unknown others?

The NJ Attorney General holds jurisdiction over the Mason entity problems.  In addition to the NJ FBI and Federal Attorneys Office in Newark, the IRS, the partners of Wachtell, Lipton, Rosen and Katz plus the NY Bar Association's ethics group all need to see the details about the Mason Civic League, Inc. stories here and on Grafix Avenger.


Readers should lend them a hand seeing they receive all this information.

MSV understands that the partners of Wachtell, Lipton need to be informed so they are not complicit in the possible misuse by Beth and Ricky Mason's 501(c)(3) "charity" - the Beth Mason Civic League, Inc.

Talking Ed Note: The well to do partners of Wachtell, Lipton certainly won't be happy to hear about any of this.  They're likely to ask Ricky Mason why a colleague pulling down millions would be pulling stunts like this for a relatively inconsequential sum?

Then again, why did Martha Stewart participate in illegal insider trading of stocks?
In this case, filing penalties range up to $50,000 in fines but don't include jail time.
It's unclear for the moment what, if any other penalties exist for outright "charity" fraud.


Okay how many political operatives and IRS problems are we up to in Mason's Civic League?


Related: MSV is being continually dogged by Grafix Avenger's sleuth One-Eye this week.  We're doing our best to fight him off. Who wants to lose a story to a guy with one eye?