Several applications for the open HHA commissioner position are available for the City Council Wednesday but only two are likely seeking consideration.

Local business owner Joseph Branco who lobbied council members for weeks prior to the last HHA vote eventually lost out to at-large City Councilman David Mello who took over the expired seat of Councilman Michael Russo.  His recent application remains active and he noted via email he views it similarly.


Branco had been a supporter of former mayor Peter Cammarano until his surprise arrest and resignation and has actively supported Mayor Zimmer since along with neighbor and colleague Carmelo Garcia at the BoE.  He's recently attended BoE meetings and voiced complaint about access to the Hoboken High School pool for a weekend family event along with opposing the Kids First majority.  In recent months Branco has actively backed local charity efforts hosting fundraisers for Hoboken fire victims at Room 84.

The other applicant vying for the appointment is Greg Lincoln, the upstart 2011 council candidate who drew over 400 votes in the 3rd ward election against the long entrenched Russo clan in the form of Councilman Michael Russo.  Lincoln now a 4th ward resident where much of the HHA resides ran an aggressive campaign highlighting corruption and the FBI surveillance tapes of Russo and federal informant Solomon Dwek.

In the end, Russo himself ran a focused campaign easily winning by drawing from his subsidized base of neighbors at Church Towers but Lincoln earned accolades for his come out of nowhere effort.

Five votes are required to be appointed by the City Council and in the last nomination, Branco earned all four council minority votes.


Talking Ed Note: After the complaints about the opening at the HHA, expect the battle to quickly move on to the two candidates vying for the seat.

The council agenda did not show a name mistakenly entered on the resolution.

Unrelated: At Hoboken Patch, Beth Mason's minion family continues to speculate on every possible thing under the sun about getting a traffic ticket.  MSV can confirm the Council President was insured as he stated last week and the car was tended to appropriately.

Do you think you can get Mason operatives to address the Mason Civic League?
Posted by SmartyJones at Monday, June 18, 2012
HHA board applicants line up for consideration at upcoming City Council meeting Wednesday night
2012-06-18T14:05:00-04:00
SmartyJones
Comments

On the City Council agenda Wednesday night is an important nomination and vote for a new HHA commissioner.  The position formerly held by Marianne Camporeale became available at the last Hoboken Housing Authority meeting when it was confirmed the commissioner had failed to satisfy course requirements within a required 18 month timeframe.

While the Hudson Reporter claimed Friday it was "a rumor," the law and past history in Hoboken suggests the exact opposite.  Assemblyman Ruben Ramos found himself in a similar predicament in 2003 when then Executive Troy Washington announced at a HHA meeting, "The DCA has indicated to me that Commissioner Ramos has not completed two courses that are required.  Therefore, as of today, Ramos is considered to have resigned his position."

Similarly in 2001, another HHA commissioner, Father Michael Gugliemelli had to step down from his seat for failure to complete required coursework.

Back in March, the governing body, the NJ Department of Community Affairs issued a letter confirming yet again any Housing commissioner who fails to meet their course requirements within eighteen months "shall be deemed resigned." 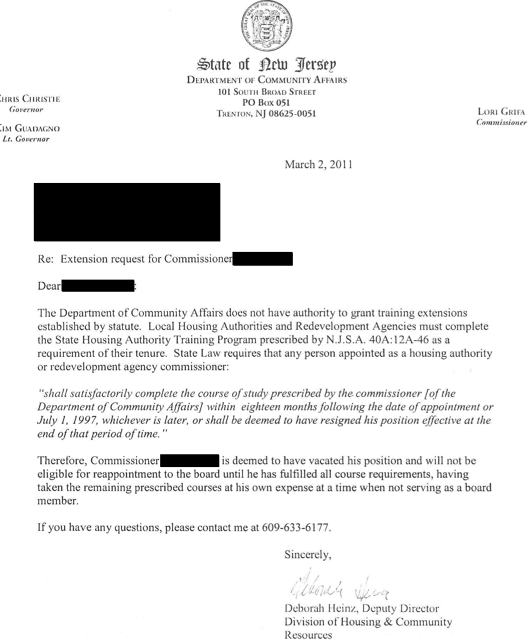 Marianne Camporeale's time requirement to complete her coursework was up last January.  She's reported to have said she completed five of six courses to the Hudson Reporter but in actuality, she's completed three of five required courses.  There's questions on whether any close votes she participated in will require review and another vote after a reorganized board meets.

That and other questions on past HHA business within a vote differential including the vote for chair of the HHA will be revisited after the City Council selects a new candidate to finish ex-Commissioner Camporeale's existing term.  HHA commissioner Jake Stuiver lost to current and past chair Jeanne Rodriguez by a single vote last month.

A letter has not been received from the DCA to the HHA as of Friday but Councilman Dave Mello who recently began as an HHA commissioner noted it's anticipated.

Executive Director Carmelo Garica has noted no letter has arrived but the rules and the sample letter above confirms the "resignation" is already effective.

Talking Ed Note: Very strong undercurrents on the impact of a new HHA commissioner taking over the "swing" seat on the seven member board.

Expect to see massive crocodile tears shed from the Old Guard Wednesday night on both sides of the dais over this surprising chain of events.  The HHA has been exploited for decades at election time with hundreds of paper ballots being produced to deliver results in favor of  the machine syndicate.

In the past two years, the BoE elections have seen several hundred vote-by-mail ballots but they were not decisive in those recent elections.  They were however mathematically out of proportion, absurdly so to each of Hoboken's five other wards.

Councilman Tim Occhipinti has been a recipient of such absurd largesse of HHA votes including a tsunami 500 submitted paper ballots in the 4th ward special election in November 2010.  That election he earned about 40% of his total voting ballots in paper and saw the election landed up as a point of controversy with challenges going to the NJ Attorney General's Office.

MSV is aware the following May 2011 election showed a more typical several hundred paper ballots for Occhipinti with one Hoboken resident stating right in front of the City Council afterward an obvious orchestration of cash payments were made to the residents being told to vote for Occhipinti on marked bills with his ballot position.  (MSV found itself alone in citing this as the resident's first hand account was ignored.)

It's thought the cash effort was to balance out the paper ballot effort and ensure Tim Occhipinti's election.  Last July, MSV with the aid of reader McGato did an analysis asking, "Did Rami Pinchevsky beat Tim Occhipinti in the 4th ward election?"

If you need to now why the Old Guard will be fighting to the death to stop Reform naming a replacement for the HHA seat, there's part of the answer.

The other "part" is being raised by a source of Grafix Avenger with the implication oversight into the financial accounting at the HHA may be in the works with Reform eyeing a new majority on the board.

All the more to make for a desperate Machine to fight for its life.  The implications of a new HHA commissioner go far beyond the confines of the HHA and whoever the City Council approves must have a sterling reputation for integrity.
Posted by SmartyJones at Monday, June 18, 2012
City Council primed to name new swing seat HHA commissioner
2012-06-18T00:01:00-04:00
SmartyJones
Comments