The questions swirling on the use of a charity to employ numerous political operatives for political purposes appears to have obtained an answer - just not the one Hoboken is expecting.

In the weekend edition of the Hudson Reporter, the following ad was placed by Beth and Ricky Mason:


The only available legal entity filed is the Mason Civic League which employs multiple political operatives and has another sitting on its three member board, the fishy fella from Weehawken - James Barracato.

The advertisement of the Mason "Family" Civic League versus the known entity Mason Civic League appears to be an escalation to inquires here and on Grafix Avenger - that there is no legal charitable entity of the former "family."

It's of course quite possible there's a newly filed entity calling itself the Mason Family Civic League.  MSV has submitted multiple inquiries to Councilwoman Beth Mason and asked for the publicly required financial filings for the legally registered Mason Civic League be made available.

The named charity Mason Family Civic League also appears on the website under the bio of Ricky Mason at Wachtell, Lipton, Rosen & Katz. 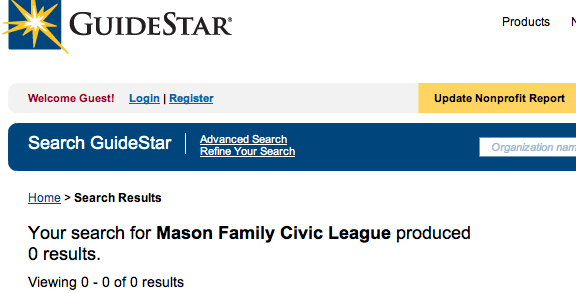 There's been no reply to our earlier request for an interview on the matter.