In a showdown of NJ law versus the Old Guard on an open HHA seat created with the involuntary resignation of former commissioner Marianne Camporeale, every device known to Hoboken's old, dark ways was used to stave off a vote on a replacement.

Marianne Camporeale spoke (video below) joining in leveling personal charges against her fellow HHA commissioner Jake Stuiver.  She said she was being discriminated against by Stuiver and the mayor and the City Council did not have the right to remove her as she was a disabled person.

Councilman David Mello interjected during her remarks he did not appreciate the use of the word mensch directed by Camporeale to commissioner Stuiver.  Her response was a denial the remark was anti-Semitic and told her newest HHA commissioner colleague "shut your damn mouth."

Later while sitting in the audience, Camporeale had to be threatened with removal as she was yelling out continuously but her biggest outburst was in response to Council President Ravi Bhalla.  To his gaveling for order she screamed, "I'll wring that gavel around your neck."


Did anyone know there was a letter from the NJ Department of Consumer Affairs saying Camporeale was considered resigned back to January?  Based on the comments by the public including Perry Belfiore, you'd think not.  Belfiore claimed the City Council had the means to keep Camporeale on the board but the Council President Ravi Bhalla would remind everyone by reading key segments from the state letter.  In doing so, both he and the Corporation Counsel would state that's not the case at all.

Councilman Michael Russo proposed the novel idea of leaving the position open until Camporeale could finish her courses but it was unclear how it would be possible within a thirty day deadline.

Old Guard claims of attacks on seniors, the disabled, grandstanding on everything under the sun with Tim Occhipinti even throwing out a conspiracy theory Gov. Christie was behind the state action.  (The same circumstances occurred with Ruben Ramos as noted in the earlier MSV story linked to the Hudson Reporter article but Russo would deny that was the case.)

At one point, Russo was challenged over his remarks about the HHA and the process for removal by Councilman Dave Mello who noted if the council had the power to do so last year it would have after Russo's confession about trading power in the HHA with FBI informant Solomon Dwek came out in their surveillance video.

Russo grew indignant to having this brought up and stated several times, "I've never done anything wrong," adding  "And never will."  Mello reminded him he was on FBI video agreeing to bribes and trading on the office for both the City Council's zoning powers and an HHA seat.

Russo would retaliate, attacking Greg Lincoln personally saying of his 2011 opponent, "He was forced to move out."  Lincoln has moved into the fourth ward with his family.

Occhipiti ignored all references to the law saying of the vacated board position, "It's a well coordinated attack," by the mayor adding the mayor had no right... and blah blah blah.  During the nomination vote for Greg Lincoln he would walk out but not before trying another desperation attempt to stop a vote saying the time to re-appoint had expired.

To that, acting Corporation Counsel flatly stated, "Your assertion is completely wrong."


Joseph Branco was nominated and received the same four votes from Council members Castellano, Russo, Mason and Occhipinti as he had for his previous HHA nomination.

Both candidates have personally lived in housing authorities earlier in their lives.


Talking Ed Note: So why all the desperation?  Well the Old Guard views the HHA as its territory where they can go "safari" for votes and the voter fraud coming out of there is a retched smell in recent elections, the worst the record setting 500 absentee ballots submitted installing Tim Occhipinti into the 4th ward seat.

Councilwoman Beth Mason who was quiet during some of the most low brow arguments tried to find out how and when the resolution was written and asked the Corporation Counsel to answer what role she had in the State's action.  Melissa Longo who sits as the current Corporation Counsel grew exasperated with trying to answer as she was interrupted by both Beth Mason and Tim Occhipinti.  She would explain she had been involved a day later when the State's letter arrived.

If you think the stakes were over a disabled, senior citizen on the HHA, well you'd be wrong.  This is about a battleground: accountability in the HHA for ALL its residents.

The Old Guard continued to vote against progress for Hoboken voting down a bond for new HOP buses even with the demonstrated heavy increases in usage by both seniors and residents.  (A bond requires six votes and not one member of MORTe would vote to do so.)

According to an earlier story on Grafix Avenger, Tim Occhipinti's not finished misinforming the public on the true reasons for an open HHA seat, putting out another Facebook post accusing the mayor of being responsible for former HHA commissioner Marianne Camporeale being replaced.

The law and the letter issued earlier by the State of New Jersey means nothing to Occhipinti.

Talking Ed Note:  Occhipinti who is only occupying a seat on the City Council due to massive election fraud in the HHA has the most reason for bitterness among the Old Guard.

After all, it's the corruption giving him sustenance most at risk.


Time for some sweltering summer heat City Council action.  Old Guard mouthpiece Tim Occhipinti is threatening to throw down on behalf of a booted HHA commissioner who he calls by a name not her own, backing a lawsuit against the mayor who has nothing to do with the State law governing her ejection.

Will the Old Guard pile on and how far will they go to drum up lies calling this an attack on seniors and the disabled?  Hey this is Tim Occhipinti, who says logic has anything to do with it.  He learned all he knows about Al Sharpton style politics from his mentor Michael Russo.

There's more park votes at stake with the City invoking possible use of eminent domain if negotiations to obtain the Pino's tow yard in the 3rd ward and the BASF - Henkel site up on west 9th street in the 5th if they don't come to a sale agreement.

Hoboken is one square mile, but it's like looking in three directions at all times: the present, the future and the "On the Waterfront" past.

Will Beth Mason, Michael Russo and Terry Castellano join Occhipinti in the gutter for some of that Old Guard religion?  Tune in tonight and see.

State of NJ: It's official - HHA's Camporeale is "out!"

STATE TO HHA MARIANNE CAMPOREALE: YOU'RE OUT! 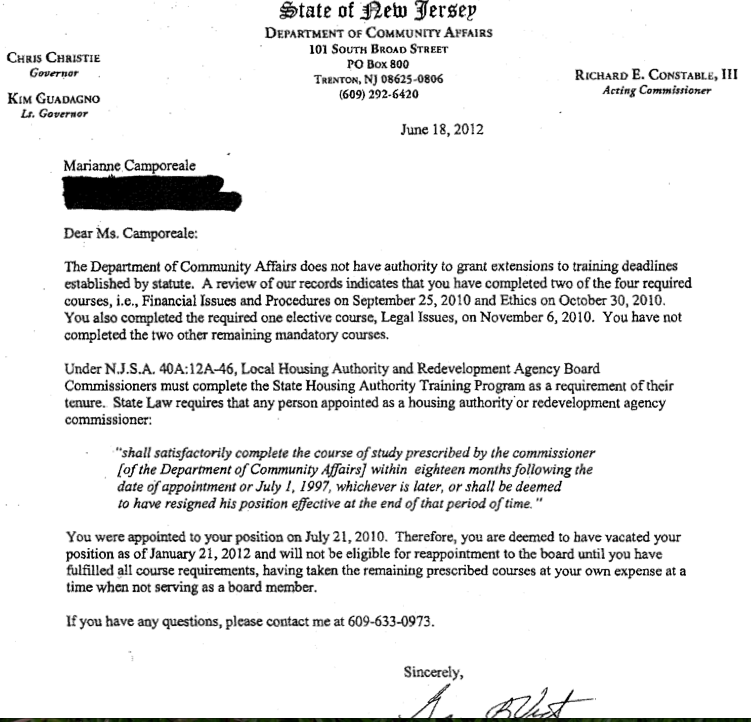 Talking Ed Note : Well Tim Occhipinti has egg all over his face and the Hudson Reporter needs to repair the damage for calling MSV's original story "rumors."

There's exploitation of the residents of the Hoboken Housing Authority at election time, an Old Guard staple and then there's exploiting of individual members with no election in sight.  Tim Occhipinti jumps the shark with his latest Facebook entry attacking everyone and anyone he deems suitable to fit his reckless narrative using one "Mary Ann Camporelli" as his foil.

First, we'd like to throw Timmy a bone and help him out here.  If you are going to use a senior resident at the HHA as a political prop to make a tomfoolery reckless attack on the mayor, at least learn to spell the name of the victim you're exploiting.  Her name is Marianne Camporeale, not Mary Ann Camparelli.

If Tim Occhipinti goes down this cliff at the meeting Wednesday night, there's nothing anyone can do to stop it just as no one can fix the fact the coursework was not completed by the HHA commissioner Camporeale within the timeframe of the state statute.

None of this should come as a surprise.  After all Tim Occhipinti's invisible army of hundreds in the HHA were mere cannon fodder for feeding his loopy arrogance in his "election."  Unlike his 575 paid voters, I mean soldiers, this "Mary Ann" is going right under the Timmy HHA exploitation bus.


Talking Ed Note: There's good news if you only get word about parks from Tim.  He still hasn't said he voted against a Southwest Park on his Facebook.  Nary a word on the matter and if you're Tim Occhipinti, that's the way you like to keep your peops, until you are ready to exploit them as props in a cheap political attack. Again.

Just another insight into the mentality of someone who benefited by being handed an office due to massive election corruption.  Those who were taken in by the phony "independent" Occhipinti and bought into the self-promotion of the clearing house Hoboken Volunteers, how do you like Timmy now?

Occhipinti exploits the HHA, but the joke's on you.

Related:  MSV notices our nemesis One-Eye has his colleague at that website with the "funny pictures" weighing in on this Occhipinti Facebook entry.  Stop beating our horsey ass Grafix Avenger.  To see her all too easy logical argument dismantling a dunce bomb:

Da Horsey finds this Grafix Avenger takedown of Timmy unfair.  Isn't there a law to aid those with Occhipinti's limited faculties?  He should file a lawsuit as de facto member of the Americans with Disabilities Act.
Posted by SmartyJones at Wednesday, June 20, 2012
Tim Occhipinti returns to exploiting the HHA well
2012-06-20T00:34:00-04:00
SmartyJones
Comments