Guest of the Stable: Joshua Henne on the ACA

NEW JERSEY CONSUMERS TO RECEIVE OVER $7.6 MILLION IN HEALTH INSURANCE REBATES THANKS TO AFFORDABLE CARE ACT
(NEW JERSEY) –  44,998 New Jersey consumers will receive $7,670,066 in health insurance rebates as a result to the Affordable Care Act’s 80/20 standard. Checks will be in consumers’ hands by August 1st – along with a notice that the rebate is a direct result of the health care law.
Consumers owed a rebate will see their value reflected in one of the following ways:
·         a rebate check in the mail;
·         a lump-sum reimbursement to the same account that they used to pay the premium if by credit card or debit card;
·         a reduction in their future premiums; or
·         their employer providing one of the above, or applying the rebate in a manner that benefits its employees

The Affordable Care Act requires that insurance companies spend at least 80% of premiums on patient care. This 80/20 provision guarantees that consumer premiums are going back to the consumers themselves – and not use for CEO bonuses or corporate retreats. Insurance companies who do not meet this 80 percent threshold must pay rebates to consumers. The amount depends on the extent to which the insurer fell below the 80 percent.

Every New Jersey consumer will receive a notice from their insurance company informing them of the 80/20 rule, whether their company met the standard, and, if not, how much of difference between what the insurer did or did not spend on medical care and quality improvement will be returned to them.

The 80/20 standard is just one of the ways that the Affordable Care Act increases transparency and extends new protections to American consumers.

“This year, New Jersey consumers will actually be getting money back from their insurance companies,” said Joshua Henne, New Jersey spokesman for Know Your Care. “Such a rebate would have been unheard of just a few years back, but thanks to ObamaCare we can now come to expect this sort of transparency and consumer protection. It’s nice to have someone on our side who is looking out for the best interests of consumers.”

The average New Jersey family will receive a $300 rebate. New Jersey is also one of the states whose health insurers have the highest average rebate in the large group market - at $359. For those consumers who are not getting a rebate, it means that their insurance companies are already spending 80% of their premiums on patient care.

For many consumers, the 80/20 rule motivated their plans to lower prices or improve their coverage to meet the standard.  This is one of the ways the 80/20 rule is bringing value to consumers for their health care dollars.

For a detailed breakdown of these rebates by state and by market, please visit:  http://www.healthcare.gov/law/resources/reports/mlr-rebates06212012a.html
****
The Affordable Care Act was signed into law by President Barack Obama on March 23rd, 2010. Over the past two years, it has been a tremendous help to millions of Americans as this real reform lowers costs and guarantees more choice for consumers.  As additional provisions are implemented, ACA will continue to benefit millions more people.
**** 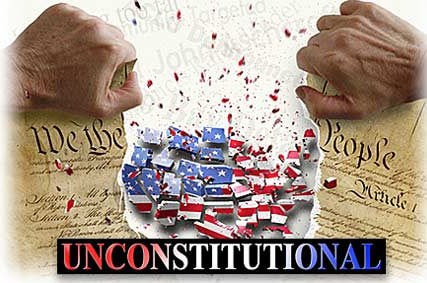 The national media was stunned with the Supreme Court's critical questioning on the constitutionality of Americans being born not free but with a price tag attached to their toe in the delivery room. 57% of polled former Supreme Court clerks anticipate the mandate will be ruled unconstitutional. What is surprising here is that figure strikes MSV as remarkably low and that four Supreme Justices will likely argue the government imposing a bill on Americans for breathing is perfectly acceptable.  In regards to the lamestream media, their surprise at the critical questioning of the Supremes strikes us as on target. They don't know anyone who would differ with Americans being born into serfdom among their chattering class.

Whatever the ruling this week, President Obama has gone ahead and reversed his earlier statement on acting to de facto legalize a group of illegal aliens without legislative approval. You know that Constitution thingy again; the one he swore to uphold when he took office. It's notable the national media applauds this action which will not be qualified.

If you are a "child" appearing around 30 entering illegally into the US who will be checking your undocumented documents and saying you can't stay? Or that they can't vote? No doubt that's the idea too, which is of course anything but American. The "transformation" of America, Amerika continues. ¿Cómo es tu español en estos días?
Posted by SmartyJones at Sunday, June 24, 2012
Guest of the Stable: Joshua Henne on the ACA
2012-06-24T15:29:00-04:00
SmartyJones
Comments