Italy defeated Germany 2-1 only surrendering a late goal in injury time and will face defending European and World Cup Champions Spain in the final.

Germany joins England, France, Portugal with the Neverlands exiting the European Cup.
Italy and Spain will square off for the championship Sunday afternoon in Kiev, Ukraine for all the marbles.

The Obamacare Tax - the NJ View

Two NJ State Senators released statements on the narrow 5-4 ruling in the Supreme Court upholding Obamacare, rejecting it under the Commerce Clause but approving it as a tax:

"The American people are the true winners today, as the Supreme Court has affirmed the Democrats' sensible efforts at health care reform.  New Jerseyans with pre-existing conditions are the true winners, as they will no longer live in fear of being denied insurance.  Young adults are the true winners, as they will be able to remain covered under their parents' insurance plans and they seek out their first full-time jobs in this hard economy.  The chronically ill are the true winners as there will no longer be a lifetime cap on health benefits.  And every other American is a true winner as health insurance will become more affordable as we expand coverage pools, reduce administrative costs and remove co-pays and deductibles for preventative care.  Today the rule of law triumphed over political attacks looking to deny millions of Americans more affordable health care."

Middletown, June 28...State Senator and Candidate for U.S. Senate Joe Kyrillos released the following statement today regarding the Supreme Court's ruling on the constitutionality of the Affordable Care Act.

"Today’s Supreme Court decision may have confirmed the constitutionality of the legislation, but one fact remains: the massive, expensive health care overhaul voted for by Senator Menendez is bad policy.

Government run healthcare spends money we don't have, loots Medicare, limits patient choice, and continues to place a cloud of uncertainty over our economy. Congress can and must repeal and replace it with more sensible reforms like providing coverage for those with pre-existing conditions.

Here in New Jersey, we've seen how the Corzine-Menendez pattern of raising taxes, spending more and leaving the bills to future generations does not work- it left us nearly bankrupt.

We need change in Washington. Real, meaningful change. The same kind of change Governor Christie is bringing to New Jersey. And I intend to deliver that kind of change as your Senator." 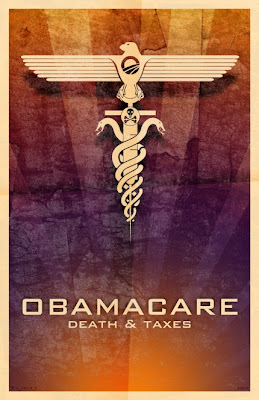 In a letter to Hoboken's senate representative Brian Stack, Mayor Dawn Zimmer sounds the alarm on legislation on the table in the NJ Senate allowing private colleges to bypass local zoning rules in construction.

This legislation if passed in the Senate, Assembly and signed into law would allow Stevens to build a tower on their property near Sinatra park as big on the Hudson as the one NJ Transit or the Rockefeller Group have proposed. 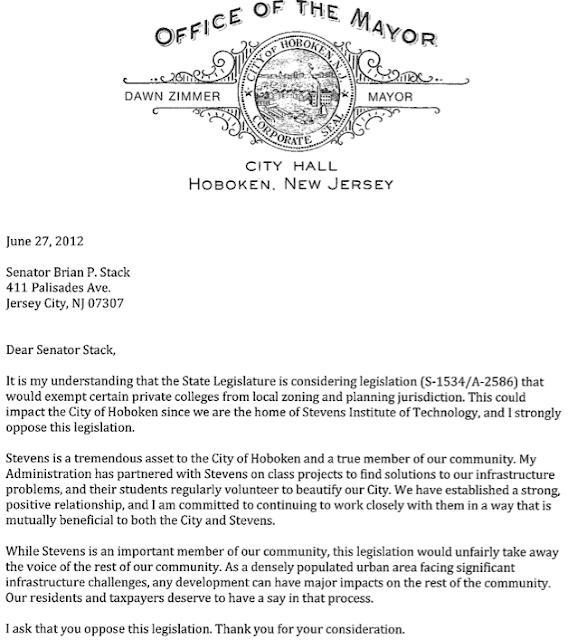 Tell him "NO to bypassing local zoning laws!"


Please consider expressing your concern by taking two minutes to make a call to the Senate President:

Email is a second choice: sensweeney@njleg.org

Talking Ed Note: It's not often Da Horsey asks folks to take direct action.  This is one of those rare instances.
Let Hoboken's voice be heard!