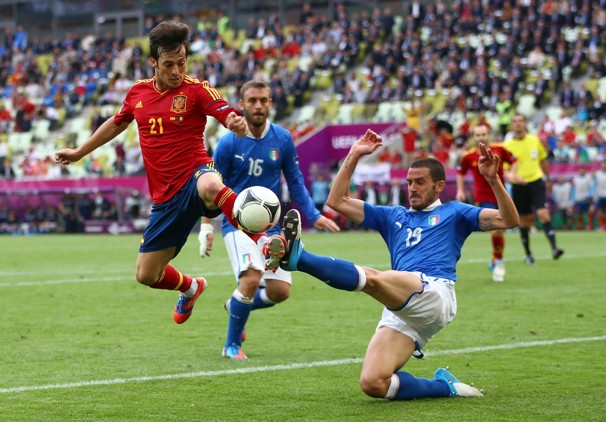 This afternoon Euro Cup defending champions Spain will face off against Italy in a final for all the marbles in Kiev, Ukraine's Olympic Stadium.

As if the prize of the championship is not sufficient, history weighs in the balance as well.  Spain is the 2008 Euro Cup and 2010 World Cup defending champion.  A "triple" is unprecedented and now a rising Italy is the last foe standing in their way.

In their opening match in the tournament, the two sides squared off to a 1-1 draw.  Italy demonstrated a willingness to match Spain all over the field.  Today they face an opponent well rested as the tournament schedule has favored Spain.

All of that is secondary.  National pride is on the line.

Talking Ed Note: A valiant but tired Italy playing twice in a week was clearly no match for the favorites falling behind 2-0 by halftime and losing a player to injury in the second half playing a man down the final 30 minutes of the game falling 4-0.  Tournament organizers should never break up the quarterfinals in four successive days.

Spain however enters the lexicon of one of the greatest if not the greatest team of all time surpassing the legendary 1970 World Cup champions of Brazil.

Italy succumbed to Spain for the first time in regulation in any major tournament.