NJ State Capital gets the love from the Boys of Summer

Ah yes, summer.  The time of year for baseball, the beach, long drives and the heroes of the Republic from the Boys of Summer office in Newark.  Looks like the ladies joined in for a game over in the NJ capital.

The FBI raid in Trenton has all the earmarks of a similar raid in Hoboken.
Maybe there's a doubleheader coming.  As Ernie Banks would say, "Let's play two!"

With no public announcement, Councilwoman Beth Mason quietly responded to the outstanding requests records be made public on her Mason Civic League by filing postcard IRS returns saying it falls below the $50,000 income threshold.  A filing under that amount means no additional financial records are required.

The filings of the postcard returns are not dated but for the years 2010 and 2011, the Mason board of directors including Beth Mason, Richard Mason of Wachtell, Lipton, Rosen and Katz and James "Finboy" Barracato formerly of Weehawken are on the record with limited information stating there is no receipts for the organization over $50,000 annually.

MSV learned of the IRS filings yesterday as our 30 day request has come and gone with the legal requests submitted to three different Beth Mason emails including her official City of Hoboken email address ignored.  At the last City Council meeting, Mason claimed to be unaware of those requests while earlier in the meeting stating no proper request was presented.

IRS information appeared not long after a community description became available indicating some work was underway.  The actual postcard filing is listed similarly for both 2010 and 2011: 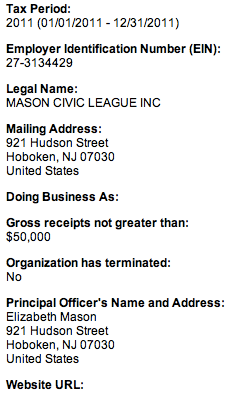 The tax filings with no supporting documentation raises additional questions.  While contributors to the Mason Civic League are not required to be made public, the funding source is likely to be entirely underwritten by Mason Civic League Director Richard Mason.

Do those contributions and expenses total over $50,000?

The Mason Civic League has run two offices on the corner of 12th and Washington since it's official conversion from a Beth Mason campaign office last year in 2011.  In addition testimony by two Mason Civic League employees in a harassment trial in Union City Municipal Court last month produced a surprising revelation: they were both paid under the auspices of that organization.

Judge Sixto Macias called their testimony "garbage" based on one eyewitness account and the Hudson Reporter noted in its Saturday story last month the judge did not believe their testimony.  (MSV has ordered the complete transcripts with the two day pledges made earlier from the community.)

Last month, MSV's investigative report on the shadowy organization revealed numerous political operatives were on the payroll.  Tax exempt charities maintain their status by avoiding political work on behalf of any individual but the Union City Municipal judge noted both Mason Civic League employees operated in political jobs.  In addition, the Program Director of the organization listed is the 2011 campaign manager for Beth Mason's City Council campaign Ryan Yacco and James Barracato is a long time paid political operative.

Calls to the parties asking for comment on their participation have all gone ignored.

Talking Ed Note: With the two filings, Mason is not likely to respond to additional requests for the financial details on the operation of the Mason Civic League.  For months, Mason has been advertising in the Hudson Reporter under an unregistered name: the Mason Family Civic League.

There is no existing filing for a Mason Family Civic League in New York or New Jersey.  That information was first uncovered last month on Grafix Avenger.  That story noted a Mason Civic group had its charter revoked for failure to file for two consecutive years.

The article notes it's against the law to operate under similar names without registering with the Secretary of State.

The Hudson Reporter also appears to also be confused by the dual name usage.  In its harassment trial story last month, "This is Hudson County dirty politics," it applies both Mason Civic League names in the same story.

In that understated June 10th story, the Reporter noted the court appeared stunned by the apparent cavalier perjury of the two Mason Civic League employees adding those charges were not likely to be pursued even with Judge Macias stating both "were lying."