Mumford & Sons at Pier A in Hoboken

The show went on and the rain never showed...

but 15,000 people did to the sold out show, the first of its kind in Hoboken at Pier A. 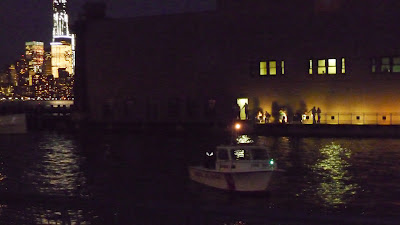 Related: The Star Ledger covered the event saying they want to come back to Hoboken for more.

A commenter there wrote:


SPOT-ON REVIEW !!! just got home from this terrific concert. The NYC skyline is unparalled. The Freedom Tower in the backdrop, through the light phases of rainy late afternoon through dusk with sun bursting through, then darkness..with strobe lights from stage streamng across the river. and then the fireworks :) Mumford & Sons were world class and started their US Tour with a bang!! and Dawes was great too !!! HOBOKEN...YOU DONE GOOD !!!!!! It was really very well done, I agree with you Tris! One question though...does anyone know what that fighter plane was doing with the helicopter escort flying over the river and so close to the Tower?? It was obviously a show plane of some type, but it was pretty nerve-wracking the first time we saw it flying so low and close.... :)

One of the best running jokes in Hoboken since last fall revolves around the former construction official and to many, just short of full fledged terror - Al Arezzo.  Originally the report was relayed that Arezzo's cronies were going around telling everyone that "Al was coming back next week."

The joke replayed itself over and over, month in and month out not much different as many Soviet citizens who worried what would happen to them after Stalin's death, thinking he should be buried in another country to prevent a repeat of the Lenin cult situation.

As the joke goes, Israel finally made the list for consideration and was decided a decent option but then someone nixed it saying, "No way, there was once a resurrection there."

There isn't one coming for Al Arezzo either.  Although the same joke "Al's coming back next week," is being repeated to this day much like the cult of Stalin in the former Soviet Union, the word is Al Arezzo is done.  The state followed through with a review of some of his activity according to independent sources and ended the review by revoking his license.

It's thought Arezzo had ownership in a property he acted on and the conflict was discovered. People will likely be asking what took so long but what it means to the City of Hoboken is the litigation Arezzo initiated against the City is deader than the old Soviet tyrant as well.

A call to the Department of Community Affairs last week, the controlling state regulatory authority didn't provide a direct answer to the status of Arezzo.  Apparently, the term being applied is "pending" as in there is one final and last ditch appeal to keep the dream alive of the construction terror's return.

As another person said of the situation, when your license is revoked the road back is much akin to climbing Mount Everest without cold weather clothing.  It's just not happening.

Talking Ed Note: Below are MSV's earlier stories from January when we lampooned the Old Guard mouthpiece Hoboken411 who told Hoboken another whopper.

All you people in the Construction Office, get to work.  You can stop looking in the rear view mirror now.  You're free.  Start acting like it.

Related: A February story with a memo from Al Arezzo to former BA Arch Liston:
http://www.hobokenhorse.com/2012/02/al-arezzo-to-city-off.html

Al Arezzo files lawsuit, not coming back to construction office

As MSV noted earlier, the construction terror of Hoboken Al Arezzo shown the exit last year isn't getting that job back and he's taken a familiar road exiting City Hall - to court.

Likely frustrated he was not being offered even a ceremonial victory with a limited time of returning to the job, he's filed a lawsuit in Hudson Superior Court.

Al Arezzo, Hoboken's foul mouthed former construction official has joined the latest list of disgruntled local civil service employees and filed a lawsuit.  A series of hearings are scheduled in the months ahead but the hope Arezzo held he was going to find the doors welcoming him back at City Hall have been dashed.

The latest lawsuit filed against the City was filed late December.

Governor Chris Christie who proposed a 10% across the board tax cut to New Jersey taxpayers yesterday has also talked about reforming civil service.  Several local mayors have already shown interest as another way to regain control over local taxes including West New York, Union City and Hoboken by opting out of onerous civil service rules.

Another recent legal complaint by former Public Safety Director Angel Alicea claimed discrimination and is notable not for its claims against the mayor and the administration but the Hoboken police department.  It was reported on Hoboken Patch the same Friday afternoon when the sale of Hoboken University Medical Center was completed.  Many observers find that timing quite odd.

The Alicea complaint though wasn't served to the City until some time later.

Talking Ed Note: The Antis, re: die hard anti-Administration people are rooting for every lawsuit against the City while complaining about legal costs to the taxpayers.

Mayor Anthony Russo saw his lawsuit claiming his health problems were the result of his time teaching in Hoboken schools tossed out of court.  That story was exclusively reported on MSV.  (Ask the other media why they never report these stories.)

Civil Service Reform as advocated by Gov. Chris Christie and supported by Mayor Dawn Zimmer and Brian Stack among other local Hudson County mayors is the only way to regain control of a system of entitlements that has long needed reigning in.

Mayor Dawn Zimmer is already on the record expressing approval with the Governor's idea of giving municipalities the choice to opt out of current civil service rules.  Until then you can expect departures from City Hall will continue to coincide with lawsuits, it's almost a Hoboken tradition.

On a separate note, once again Hoboken411 comes up smelling like a broken valve at the North Hudson Sewerage Authority on the Al Arezzo story.  This time it's not his usual intentional fare of pathological lies, making it even more funny than when he goes off the rails as Al Arezzo is most certainly not back.

It's not exactly news in these parts especially for the thousands of regular readers here, but once in a while it's fun to have a good laugh over the latest lunacy going on at Hoboken411.  The ubermensch Beth Mason supporter known for dwindling readership and fascist censorship practices trotted out another bit of false information on City Hall - this time on former construction office terror Al Arezzo.


MSV had informed readers on several happenings with Arezzo since an early 2011 exclusive and recently noted the hilarity of his construction friends running around town the past several months saying "Al's coming back." Hoboken411 desperate to appear plugged in on any notable City news floated the idea he's coming back to work at City Hall - and it's dead wrong.

No surprise as Hoboken411 doesn't get much right other than store openings and closings but the timing is certainly less than well planned.  MSV noted previously the idea Arezzo is coming back into his old job was not happening although we highlighted he may have sought some ceremonial timeline of holding the job for a day to save face before officially resigning.

None of that is happening although considering the typical employment patterns in Hoboken, no one would be surprised if after exhausting the lengthy civil service hearings ahead, Arezzo follows with a lawsuit.

Construction terror Al would join an ever lengthening list looking to cash in on the City.