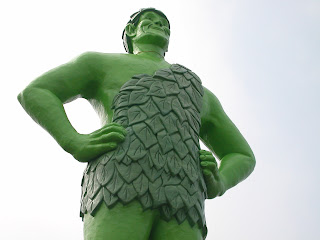 The Hoboken Journal is back in the fray and looking to aid in the petition drive to give voters the choice when to hold its municipal elections.  The Jolly Green Giant will be collecting petitions in midtown on his home block in front of 807 Garden between 7:00 and 9:00 tonight.

In an effort to help with this drive if you are a registered voter in Hoboken and reside here currently (or even if you are not registered) feel free to stop by at 807 Garden Street tonight between 7-9pm and sign both petitions. If I am not outside ring buzzer #6 and I will come down. Alternately you can call me at 917-543-1187 or email me kurt.gardiner@gmail.com. In signing both petitions you simply allow them to get on the ballot and let the people decide if we should move elections to November and/or eliminate the unnecessary run off elections. Hopefully some of you will find my midtown location convenient.
The petitions seek two important things:
1. Move the Hoboken municipal election from May to the general November election; and
2. Eliminate the run-off election, with the highest vote-getters being declared the winners.
These are petitions whose time has come:
1. Increase voter turnout! By having the election in November, it will encourage greater voter turnout. People know that voting in general elections in November are important, and the bigger the turnout, the fairer the election.
2. Reduce voter fatigue! Never again, will we have so many elections in a single year!
3. Reduce costs to taxpayers! By consolidating elections, we will save the taxpayers money. Each election costs more than $75,000. This year, the Board of Education elections were moved to November. Let's keep the momentum going and move the municipal elections to November too!
4. Reduce the costs to the candidates! By having not just one, but two municipal elections (the first round and the run-off), the costs are extraordinary. As a result, too often the candidates need to be independently wealthy, or beholden to special interests that expect payback after election day.
The deadline is looming and petitions are due on August 15th and about 1500 signatures are needed to ensure there is the correct number of approved petition signatures for both petitions. 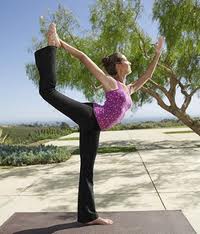 In addition if you are an uptown resident, another Hobokenite is looking to coordinate with people who wish to sign the petitions.  Please contact them at the following email to make arrangement leaving your name and number at:


Talking Ed Note: The Hoboken Journal has another story and new poll up too.  Take a look:
http://thehobokenjournal.blogspot.com/2012/08/reader-poll-is-beth-mason-truly-evil.html
Posted by SmartyJones at Tuesday, August 07, 2012
The Hoboken Journal joins the petition drive
2012-08-07T06:38:00-04:00
SmartyJones
Comments

In the March story, former Councilman Michael Lenz sought redress in a story posted on Hoboken411 claiming he had designs on the City's Business Administrator position and was the target of racist accusations by a Hudson County employee.  He sent a letter to all the respective parties among them Councilwoman Beth Mason who has run her political operations on the iron fisted censored website that doesn't permit any of its victims even an opportunity to respond.


In a phone interview, Lenz addressed the situation since he sent out the letters.  "I think their silence speaks volumes.  They had no basis for their charges.  If they did they would have reiterated the charges."

Speaking to the current situation Lenz would add, "They have been put on notice.  If they repeat the charges, they would only be exposing themselves."

Hoboken411 and its fascist hit squad responded the following month with a savage attack on Laura Keating, a Hoboken resident and IT specialist.  What was the claim against this resident?  Hoboken411 said she was a candidate for the Business Administrator position with no evidence.

It was never explained why an IT professional would even be applying for a BA position in the City of Hoboken and of course the iron fisted censorship Hoboken411 is famous for remained steadfast to prevent Laura Keating (or anyone) from responding.

Michael Lenz sent the letter (below) to the Hudson Reporter who ignored it completely.  It did nothing on the attack on Laura Keating either.

Councilwoman Jen Giattino would read into the record a statement from Laura Keating who was out of town on business.  The statement noted anyone associated with Hoboken411 had to answer for it.

Laura Keating's crime against Councilwoman Beth Mason and the reason for the savagery against her?  She happens to not only be a high level Data Warehouse developer; she's also married to the former City Councilman.


Talking Ed Note:  No one in the local media reported anything on the letter.  No one inquired and asked anything of Councilwoman Beth Mason that we've heard.

Hoboken411's legal problems may only be beginning after a judge's bench warrant issued for his arrest with his failure to appear in a Jersey City court for alleged criminal coercion last week.  In a letter obtained by MSV from none of the named parties, Michael Lenz declares a story updated on Hoboken411 last month "Deconstructing Michael Lenz" is defamatory, demanding the story be taken down and a retraction issued.

The letter is directed not only to Perry Klaussen but Councilwoman Beth Mason and her friend "not paid for friendship" Lane Bajardi.  The letter copied to Michael Lenz's lawyer signals the first ever public challenge coupled with possible legal action to the frequent character assassination deployed on Hoboken411.  Many in political circles claim the unscrupulous attacks on Hoboken elected officials, employees and residents have taken place on the heavily censored website over years where the troika are believed to be involved and Beth Mason's checkbook the driving force.

Michael Lenz's bombshell letter sent by both certified and regular mail describes the parties as "owners, writers, and/or funders, in whole or in part" of Hoboken411.  In the City Council, Beth Mason has not answered questions or offered any transparency on her role in Hoboken411 and the odd appearance of confidential City documents and information appearing on the website where she directs her political operations, only saying she does not "own or control" the website.

The letter outlines its claims of defamatory information in detail, contradicting Hoboken411's story, in itemized fashion and points out Lenz has been a private citizen since the 4th ward special election in November 2010.  In the letter Lenz denies he is the target of alleged racism or discrimination and that any such complaint was made against him.

Since Lenz's departure from the Hoboken City Council, Beth Mason has directed negative comments about Michael Lenz in City Council meetings by name, also in recent months.  Those prepared speeches are believed by many observers written for her by Lane Bajardi, her political operative who is known for his pathological hatred for the current mayor and the former 4th ward councilman.  Bajardi has never publicly denied being a political ghostwriter for Hoboken411 although it's been stated as well known by people in Hoboken political circles here on MSV and other local websites. 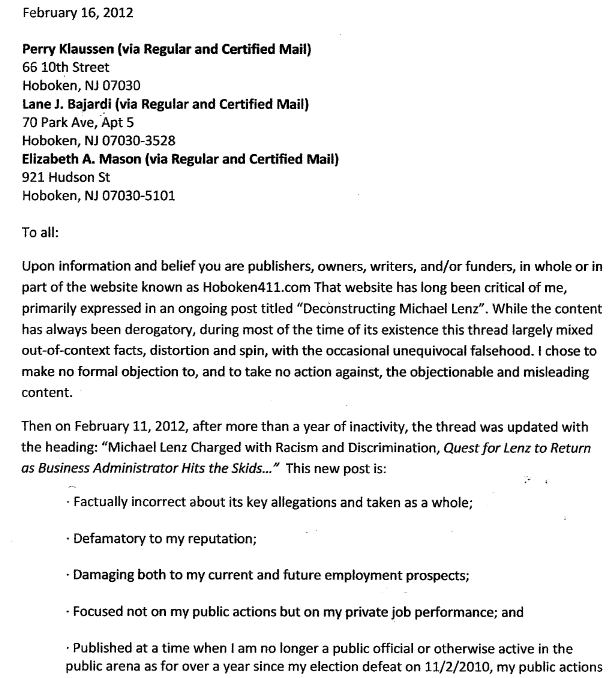