The discussion on the petition to see municipal elections moved to November quietly passed without one negative vote.  Despite the unanimity, one public speaker on the petition, Phil Cohen was hectored after his remarks as he sat in the audience by Councilwoman Terry Castellano who attacked him for his comments.  Noting his neighbors complaints on the numerous elections in Hoboken created a backlash from Castellano about voting rights in other countries, Council President Peter Cunningham fortunately stepped in appropriately to halt the behavior early.  But it revealed the animosity for the petitioners' masterstroke in mapping out a plan to have the matter put to the public to decide.

Election Day the public will decide if it elects to have municipal elections in November and the elimination of costly runoffs putting grassroots and lower funded candidates at a distinct disadvantage.

An ordinance to make changes to the southern entrance of Hoboken failed.  The upside is an approval for a new light from the County for Madison Street is anticipated shortly and may be pivotal to alleviating long waiting times in and out of the southern end of town.

This problem should not be overlooked for what caused it - OVERDEVELOPMENT.
Cars getting in and out of town reflect the fact this town is already overdeveloped.  Even changes made to the southern entrance one way or another are not going to correct reasonable driving expectations.

Another ordinance to stop smoking right outside municipal buildings passed 6-2.  Council President Cunningham called it a health issue for everyone not only employees.  Castellano and Occhipinti voted no and seemed overly concerned with city employees having to move 20 feet away from doorways and entrances.

Measures for subsidized housing were approved but MSV will need to get some additional information.

Beth Mason was absent and reportedly partying in North Carolina.

Talking Ed Note: At the July council meeting, MSV signed up late for public portion and discovered a lawsuit was planned as voiced by Councilwoman Beth Mason who announced the "verge of legal action," which proved true two weeks later with one difference.  It wasn't only MSV it was 12 defendants who typically speak against corruption and Beth Mason.

Hoboken resident David Denning sent an email voicing disagreement and said he would email Beth Mason.  We wished him luck not expecting there would be a reply as Mason typically ignores constituents other than the last remnant of dinner companions.

Mr. Denning voiced his disagreement with Mason's threat made good and making it sitting behind the dais of the City Council as she collects money from the constituents paying her salary.

MSV knows Mr. Denning from various events around town and thanks him for taking a public stand in the face of obvious political intimidation.  That he took it whence it originated is noble and noteworthy.
Posted by SmartyJones at Wednesday, September 05, 2012
November municipal election referendum, subsidized housing, and Beth Mason criticized for $24 million lawsuit
2012-09-05T23:31:00-04:00
SmartyJones
Comments

As many of you know, the construction of 91 low-income housing units at the Hoboken-North Hudson YMCA is well underway – great news for individuals who are not as well off as many of us are in this community.

Starting with an open-bar cocktail hour at 6pm on Monday evening, 9/10/12, the Y will be holding a benefit to support its important ongoing services to the community – the low-income housing project as our first phase and the community center and fitness facility as our second.

Knowing how important it is for the Y to offer housing and plan for the future of our community center and fitness facility, The Board of Directors hopes you’ll join other caring friends and neighbors at what promises to be an uplifting evening.  Seating is limited and you may pay by check at the door or throughwww.brownpapertickets.org/event/268078  A portion of your ticket price is tax deductible.
Thanks for your ongoing support. 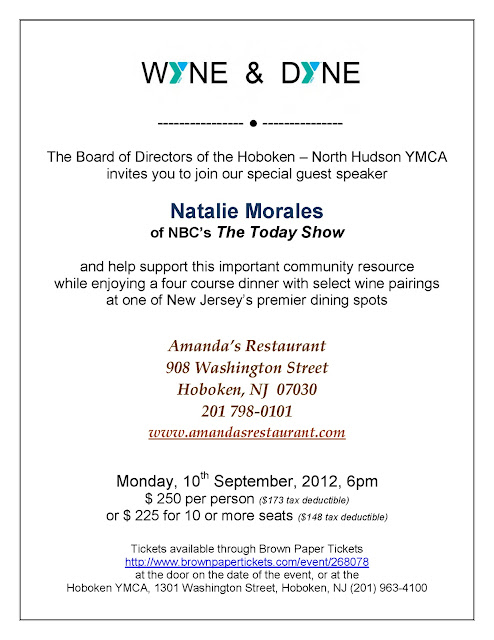 Posted by SmartyJones at Wednesday, September 05, 2012

Petitions to consolidate elections, Church Square Park fixes, and Pier A/9-11 memorial funding are on tap for the first council meeting after the summer.  There's also much more on some sanguine issues across the board including the big downtown NJ Transit area redevelopment.

The petitions to move the elections to November and eliminate runoffs is before the council.  It's counter intuitive but a no vote by the council puts the public's referendums on the November ballot.  Should be interesting listen to some people who were for the people deciding until they were against it.  The Old Guard is none too pleased with higher turnout November elections as they cling to Old Hoboken voters who see for themselves improvements for the many and not the few.  This should be entertaining and comes early in the meeting.

There's also the competing cafe rules back again.  The same issue occurred at a prior meeting with Councilwoman Jen Giattino presenting a well researched ordinance against her then seating partner Tim Occhipinti.  The council landed up shelving the effort on both seeking in a rare instance more effort outside the body.  Good idea in general, poor instance to apply here.

Now both ordinances are back and MSV hasn't looked into any latest round of changes it but we're pretty sure Occhipinti hasn't changed anything.  He doesn't have to have facts on his side, make sense or work with others.  That's not his experience, his mindset or capability.  His only development on the City Council working with others is to drone on repeating himself making everyone's ears hurt.  He never sways others with his argumentation but he insists they hear his talking points over and over and over.

At the last City Council meeting when challenged how he's cost the city millions of dollars with obstruction tactics on the midtown garage, he mutters "revisionism" in response.

There's also a number of items related to "affordable housing" re: taxpayer subsidized housing.  It sounds noble to say you are for "affordable housing," less so when you call it what it really is - taxpayer subsidized housing.   In Hoboken, it's a political tool, used with no accountability to the public more in line with Soviet style corruption in both form and substance.

There's funding for a review of the process but does it include short, mid and long term analysis on the impact to the people paying the freight in Hoboken?  MSV's review of the public documentation is unclear and in the not too distant future the City of Hoboken faces a reval.  (Yes, it's lurking out there.)

MSV is in agreement with The Hoboken Journal what's been missing in the subsidized housing shell game in Hoboken is accountability.

Before anyone gives away the store and pats themselves on their respective backs for helping one group of people at the expense of others, maybe a full evaluation of subsidized housing in Hoboken - past, present and future is in order.

The taxpayers foot the bill for decades!


Talking Ed Note:  Since this is Hoboken, there's always the unexpected with drama and political maneuvering.  The move of public speakers, the public portion to the early part of the meeting was a success even in the dead of summer August meeting.  MSV advocated for such a move early this year so the public could speak at a reasonable time, not after midnight.

It's a double edged sword though.  MSV signed up at 9:30 in the meeting last July and discovered asking for public documents to be made public can find you in a lot of trouble.  That inspired Beth Mason to announce a lawsuit on the way, one she asked the City Council to handle "appropriately" as she said.

You are able to speak before the City Council with hat in hand making requests but if you criticize Beth Mason and her Old Guard allies, out comes her checkbook and here comes the lawsuit.

It's despicable but this is the same person who was so craven in her political cynicism, she repeatedly tried to see the hospital closed costing over 1,000 families their livelihood and bankrupt the City of Hoboken - all for political gain.

So what's a mere SLAPP to a dozen of so residents who dare to criticize corruption and Beth Mason?