79 bikes up in annual bike auction

The City of Hoboken will auction off 79 bicycles during its annual bike auction. This year, the auction will take place online through govdeals.com.

Photos of the bicycles can be viewed online at www.hobokennj.org/bikeauction. They will be available for physical inspection by the public on Saturday, September 15 from 9am to 1pm at the Hoboken Central Garage, located on Willow Avenue and Observer Highway. The online auction will take place at www.govdeals.com beginning on October 2, 2012 and lasting through October 14, 2012.

The bicycles being auctioned do not match descriptions in police reports for stolen bicycles, however residents who wish to claim one of the bicycles as lost or stolen should first visit the Central Garage to inspect the bicycle and obtain a release form which must be brought to the Hoboken Police Department. 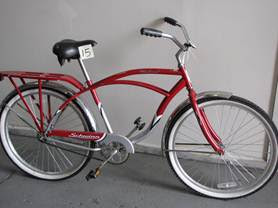 State Senator Joe Kyrillos is running for US Senate to represent New Jersey and pitched his case yesterday for voter's support at Hoboken's Elysian Cafe in a forum billed "Cup of Joe with Joe."

In doing so, Kyrillos took the statewide race back to incumbent NJ Senator Bob Menendez's backyard who is a Hoboken resident facing the state's voters this November for re-election.


Appearing before several dozen local Republicans in the "Lady's Room," of the Elysian Cafe, Kyrillos the Republican challenger focused on the economy, its disparate impact on women and finding real solutions for the country.  "There's 20 million plus people out of work and my opponent has no plan to make it better," he said to no surprise in the audience.  "We have to have a different approach in Washington... Let's deal with our long term obligations," he bluntly added.

Speaking in pragmatic terms, Kyrillos directed remarks to the economy linking its effects specifically to women.  The sponsors, the Republicans of Hoboken billed the event as a local women's forum and State Senator Kyrillos didn't back down to the challenge in seeking the women's vote saying "women care about their careers" and the same for their children calling attention to those attempting to enter the work force adding, "half the (college) graduates don't have a job to go to."

Noting the economy was impacting everyone especially hurting women Kyrillos, soft-spoken in his tone flatly refused to back down to party line criticism saying, "No one is going to stereotype me," adding he was gratified to speak on women's concerns.

On another area of concern - energy - the State Senator said, "Alternative energy is great but let's be practical.  Wind and solar (power) isn't going to do it," and voiced his support for the Keystone pipeline.

Referring to his opponent but never by name, Kyrillos said he was looking to work with whoever he needed to in Congress or if President Obama was re-elected saying he expected he would do so on a daily basis.

Describing himself as pro-choice, Kyrillos defined himself further during Q&A saying he didn't support partial birth abortion and saw much of the argument about contraception as an inverted dialogue with "religious liberty" being the stakes at private institutions.

Kyrillos noted he was born in Kearny and is planning on appearing in Hoboken again at the September 30th Hoboken Arts and Music Festival on Washington Street.


Talking Ed Note: The last time MSV heard of a Senator Bob Menendez appearance in Hoboken was at the Frank "Pupie" Raia birthday party.  We haven't heard any solutions from the senator to the nation's economic ills and our previous call was not returned after contacting his office.

Senator Menendez however thought enough of the Hoboken event yesterday to send his staffers to protest.  MSV spoke to two of them who stood across the street with a sign.  They said there was no Menendez office in Hoboken but there was one in Jersey City and New Brunswick.

They admitted being from the New Brunswick office.  They heard the Jersey Journal was at the event and asked if Da Horsey was a reporter there.  Replying in the negative, we asked what their thoughts were on the race.

They declined to answer saying they were not authorized to speak for the campaign.
Apparently they were authorized to protest Senator Joe Kyrillos' appearance in Hoboken.
Posted by SmartyJones at Thursday, September 13, 2012
NJ Senate candidate Joe Kyrillos in Hoboken focuses on women and the economy
2012-09-13T10:40:00-04:00
SmartyJones
Comments

It's not official but MSV is hearing an unconfirmed report Hoboken Charter School will be taking temporary space for its students at St. Anne's School in Jersey City Heights.

The fire last week forces the school to seek out alternatives.  Perhaps this is the best one in the short term.


Talking Ed Note: MSV was not in attendance but is making the feed available for review.
A very short segment is available at the end here.