In a shocking end of meeting announcement, a tearful Councilwoman Carol Marsh informed her colleagues and the City of Hoboken she could no longer continue her duties due to overwhelming personal family matters.

A longstanding member of the loose coalition known as Reform, Marsh's public service goes back more than a decade personally culminated with a run for mayor against incumbent Dave Roberts in 2005.  In a heavily moneyed race running as an underdog, Marsh ran a strong campaign against long odds.

She had served at that time as a council member in one of two unconnected terms.

In 2009, Marsh was the name brand for Reform among then mayoral candidate Dawn Zimmer's council slate.

Since 2009, Councilwoman Marsh has been a critical and important vote being one of the five reform oriented votes consistently willing to work with the mayor on critical legislation.

The resignation is effective October 3rd.

Talking Ed Note:  This resignation took MSV completely by surprise.  Last summer an unfortunate accident occurred in Councilwoman Marsh's family.  MSV heard there were complications and demands as a result but had no idea it would impact the council as it did with her resignation.

MSV would like to thank Councilwoman Carol Marsh for all her years of service to Hoboken.  She's been an extremely thoughtful and reserved legislator and brought the longest serving institutional memory to the council from the reform perspective.

Her contributions will be missed but her measured approach to thoughtful action will be long remembered.

Update: MSV will have more news on the meeting itself but for the moment the big story is Councilwoman Carol Marsh.  MSV admired her knowledge of land use and depth on any number of subjects and how she applied it to a consistent application of law.

That's a foreign concept to many in this town and it's not something that should be undervalued.  An outstanding consistency in applying and following the law is one of the most important elements in serving on a legislative body.

Carol Marsh brought that to the table at every meeting.  In spades.

In other news, many may not know that Councilman Michael Russo was noticeably absent last night.  While politico Perry Belfiore arrived on the scene to offer his unique bellicose exchange with the council, he said not a word about Michael Russo and the Russo for Hoboken - FBI - Dwek problem.

Tuesday night the Hoboken Rotary hosted a benefit party with over 500 guests and raised almost $25,000 for the Hoboken Charter School. The school will use the money for repairs after a recent fire damaged its building and displaced over 190 students.

The school at 713 Washington Street is across from Chadwick's store. "I looked out my window and saw the school on fire, and it looked bad,” Chadwick said. “When I found out the inside was ruined I called my fellow Rotarians and got to work. It's not easy to do this in such a short amount of time but when Rotary members work as a team we can do anything."

Chadwick contacted Cory Checket, owner of the Turtle Club restaurant and bar at 936 Park Avenue, about hosting the benefit. “When the Hoboken Rotary approached us to host the fundraiser we didn’t hesitate,” Checket said. “It is truly remarkable how well Hoboken can come together to rally around a neighbor or institution in need.” The Turtle Club gave a free drink to all guests who donated a suggested $10 at the door. After hundreds of guests responded to the benefit's Facebook page, neighboring restaurant 10th & Willow also opened to accommodate the overflow.

Hoboken Charter's Executive Director and K-8 principal Deirdra Grode said she hopes her students can learn from seeing the community come together to help. “I hope that our students see that it is possible to overcome adversity with hard work, commitment and team work,” Grode said.

The Hoboken Rotary has a standing fund to collect donations for this and other emergencies. It will continue to collect donations for the school in the coming days. “It is great to see the community come together in helping each other,” said current Hoboken Rotary president Ryan Mitchell. “This has been and will continue to be our mission, as our motto is service above self.”

It's showtime tonight for the dueling sidewalk cafe ordinances.  Why it's been pushed off a number of times is beyond us here.  From the beginning it was clear one had done a lot of homework and worked out reasonable changes based on the last time the ordinance had been updated and the other looked like a sixth grader pretending to do an ordinance.

It's Jen Giattino vs. Tim Occhipinti for the 12th and last round.  Go ahead and decide who is who.

Other ordinances up for final reading include set asides for subsidized housing and also final work toward a reval for the whole city.  Funny seeing them both on the agenda together as they will have some long term impact on one and the other.

There's many ordinances up to bat so public portion won't be until after dinner time.
Please act accordingly.

An interesting resolution, number one will allow the City to settle on legal matters for $21,500 or less.  This strikes MSV as reasonable but it's one that could lead to abuse if the executive doesn't act responsibly.  We'll see how that one sorts out because although the City clearly has a fine mayor now, the legal fun and games could start the day she departs the scene.  Let's hope it's not too soon.

The big question on everyone's mind (we don't know if the public will raise the question in public portion) is concerning Councilman Michael Russo's Solomon Dwek problem.  He can resolve it by making public bank statements from his Russo for Hoboken campaign account.  The defunct account with no required legal filings since late 2008 was whittled down from over 18K to just over 1K.

But that's not the main issue.

The controversy is what deposits were made around the time FBI informant Solomon Dwek was making rounds with Hoboken elected officials and one lunch in the spring of 2009 with Michael Russo specifically.

Will Michael Russo clear the air and announce he's releasing the bank statements proving no bribe was followed through on or not?

Everyone will be watching to see if he does and especially if he doesn't.
You know everyone isn't a crook, but let's find out the truth and move on.


The agenda is available here:
http://www.hobokennj.org/docs/council/agenda12/ccm-9-19-12

Resolutions for tonight's meeting can be found here:

Here's a theoretical timeline of events for Michael Russo

Your campaign, "Russo for Hoboken" files its last ELEC report in September 2008

You keep more than $18,000 in the account for a handy slush fund 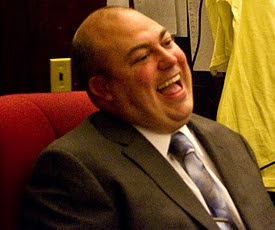 You agree to meet with a developer and bagman Maher Khalil of Jersey City.

You agree to accept $5,000 even with no active campaign in support of a developer project

You explain your political philosophy to FBI informant Solomon Dwek "I did for you, you do for me."

Lunch meeting ends as you express appreciation for Solomon Dwek

You decide to run for Council again

You have $18,000 remaining in your campaign account, but you start a new one not moving the money

You enjoy many fun trips to Atlantic City. Good times. 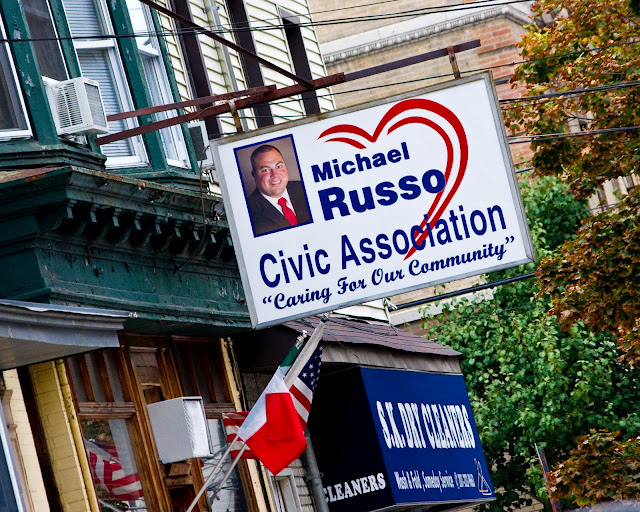 In March a book, the Jersey Sting is released detailing the biggest NJ corruption scandal in state history.

You ignore Horsey's request for an interview and call the report old news saying NJ.com reported the story

MSV says there was no NJ.com story at all

The local media says no more about it

Da Horsey contacts the authors of the Jersey Sting, they stand by their story

The FBI surveillance video comes out.  You don't look unfriendly to Dwek, anything but

You celebrate your big victory at the Russo Civic Association

Days later, your weekend pal Patrick Ricciardi disappears from his IT job and his office is padlocked

You tell people/MSV the lease ran out. But the Russo Civic Association never reopens

The plan fails, the suits are not pleased, handwringing begins anew

At the last minute, Tim Occhipinti bails on the plan and you change to saying you saved the hospital

The audience boos your blatant lie you saved the hospital

You and MORTe colleagues settle for costing Hoboken $4.5 million nixing a required simple tax change refi on the hospital garage 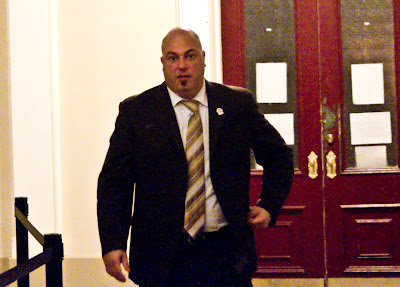 NJ ELEC receives a complaint about your 2008 campaign account from the Wiley Coyote, Eric Kurta

You sign a political letter (is there any other kind you'd sign) attacking the mayor along with your MORTe colleagues for using Ravi Bhalla in a small personal matter over a leaky roof.

Your letter is already planted in the Hudson Reporter and Hoboken411

The Hudson Reporter runs mayor's modified letter in reply to yours

Monday MSV does the real story blowing your s$%& up

Tuesday you find out your previous deal is null and void

Wednesday you break the news to the wife

Thursday you are sleeping on the couch

Saturday you get a special message via text, it's not your lawyer 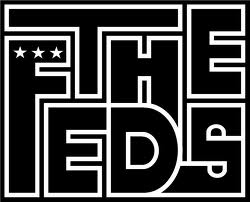 Talking Ed Note:  MSV has no direct information on what fully transpired between Michael Russo and Solomon Dwek nor does this chronology seek to draw such a conclusion.  Any claim to the contrary that one theoretical with questions raised concludes such knowledge is incorrect.

Looks like there's a battle over the coverage of the Russo-Dwek lunch business.  The Hudson Reporter which has consistently stated as fact Russo did not agree to accepting the bribe is sounding most unhappy in the comments section:

By the way, if you post a comment there, don't assume your login/identity is protected.
Posted by SmartyJones at Wednesday, September 19, 2012
Overview: a possible Michael Russo Chronology
2012-09-19T12:31:00-04:00
SmartyJones
Comments

There's meeting upon meeting with NJ Transit presenting their latest incarnation of a revitalized Hoboken in the terminal itself.  It's actually a two-fer, one presentation is in the morning at 8:00 and another at 6:30 this evening. 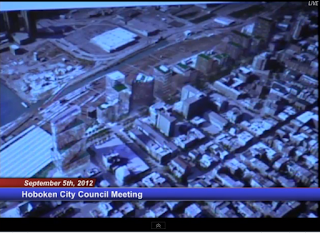 The City Council also has a full agenda on tap for tonight with double digits in ordinances meaning the move of public portion to the beginning of the meeting right after will seem not so early.  The idea is taking hold quite well and a broader slice of the public is already taking advantage.

Sure beats the alternative of listening to some council members droning on and on.  Some on the dais much preferred that but MSV far prefers this democratic variety.