Hudson Reporter shows no interest in corruption other than abetting it


This week's Hudson Reporter again made no mention of the problematic missing financial transactions re: the deposits into Councilman Michael Russo's campaign account "Russo for Hoboken."

Those bank transactions are definitive in showing whether Michael Russo told the truth when he said he did not accept $5,000 as agreed over a Jersey City lunch with Solomon Dwek back in the spring of 2009.

Of similar importance, the Hudson Reporter editors: Caren Matzner and Gene Ritchings see a different problem: bloggers.  Well not paid political operatives feeding them weekly narratives and/or writing on Hoboken Patch, their website and elsewhere but the anti-corruption, pro-reform bloggers.

Their repeated efforts working with paid political operatives attacking Reform directly and indirectly is a scandal in and of itself.  They shouldn't wonder why any honest official or citizen would be wary of speaking to them.  They repeatedly write about you as they have MSV; they just won't contact you or allow you an adequate opportunity to do so.  Speaking to paid political operatives is sufficient "journalism," objectively getting all sides.

Does anyone remotely believe a story on a bloggers lawsuit has the Hudson Reporter completely unaware of the political operative(s) they have direct and indirect dealings with at present and over years?

Unlike Augie Torres, the Hudson Reporter hid that information from the public in its story.

There is only one word to describe their lies of commission and ommission: corruption.

Anti-corruption, pro-reform bloggers are the enemy.  Using paid political operatives flagrantly making up phony stories about Nazi parody videos gets their editors ginned up.  Hiding the truth on political operatives they've had DIRECT DEALINGS while doing lengthy feature stories about million dollar lawsuits is opportunity for more fun and games.

Meanwhile the political operatives' paymasters skate along with some very large questions looming about Michael Russo and Solomon Dwek.

Here's just one obvious example from last fall showing the bias at the Hudson Reporter with commentary on the massive Data Theft Ring conspiracy at City Hall where tens of thousands of emails into and out of the mayor's office on every sensitive communication and document imaginable.

Not one word appeared on the pages of the Hudson Reporter mentioning the damage to Hoboken, the taxpayers and its citizens.

The arrest of the IT manager Patrick Ricciardi caught looting communications for approximately a year and a half - the exact same time period both Michael Russo and Beth Mason LATER attempted to see the same emails released en masse to the public hasn't ever raised the hackles of the Hudson Reporter.

Hoboken has no fourth estate of merit.  It's quite literally naked in the face of corruption.  Worse, the Hudson Reporter goes far beyond just looking the other way.  It's actively abetting it.

Below is a link to the MSV Horse Sense editorial from last year detailing the reaction of the Hudson Reporter to the arrest of IT Manager Patrick Ricciardi and the massive Data Theft Conspiracy at City Hall.

Hudson Reporter scorecard after the FBI arrest:
Blogger mentions: 9  Patrick Ricciardi mentions: 0
What else needs to be said?

Talking Ed Note: The Mason Civic League office on 12th and Washington doesn't look like its going away before an election. There's a notice on the door referencing an upcoming event for Hoboken Charter. No doubt it will be used politically to advance the Frank Raia BoE slate no matter what "banner" the space is officially under.

MSV has added a poll on the top right of the page asking, 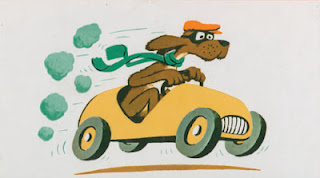 This latest production from Mile Square Theatre (MST) brings the classic children’s picture book to life with the kind of inventive staging of plays for young people for which the company is known.  Both Lilly’s Purple Plastic Purse in 2009 and The Garden of Rikki Tikki Tavi in 2011 received critical acclaim for their excellent acting and beautiful design.  Go, Dog.  Go! Continues this tradition of quality family productions.

“Every year, we dedicate a main stage slot to a play for kids”, say Chris O’Connor, MST’s Artistic Director. “We feel it’s important to offer good quality theatre to young people to let them gain an appreciation for theatre at a young age.  To go to the theatre as a family is such a great experience, too.”

Performances are Saturdays at 2pm and 5pm, and Sundays at 11am and 3pm at Monroe Theatrespace, 720 Monroe Street in Hoboken. Tickets are available online at (www.milesquaretheatre.org) or before each performance. Reservations are recommended. Tickets are $22 for adults and $12 for children and seniors.  Parking is available behind the theatre.
About Mile Square Theatre

“An audit of Port Authority finances was a crucial step towards curbing waste, fraud and abuse. The best disinfectant for this agency remains sunlight, which is why it’s unfortunate that the Governor vetoed the Port Authority Transparency and Accountability Act. Anything less than permanent, statutory requirements for transparency will only help perpetuate the culture of waste that previous audits of the Port Authority have discovered.

“This report may paint a rosy picture at the Port Authority, but let us not forget the recent dismissal of two politically-appointed employees for abusing their position and exaggerating their resume. The point is: more work needs to be done. As a member of the Assembly Transportation Committee, I am eager to analyze the results of this report and pledge to continue my efforts to hold this authority accountable for its spending and hiring.”
Posted by SmartyJones at Sunday, September 23, 2012
Assemblyman Ruben Ramos on Port Authority Audit of Capital Costs
2012-09-23T08:00:00-04:00
SmartyJones
Comments